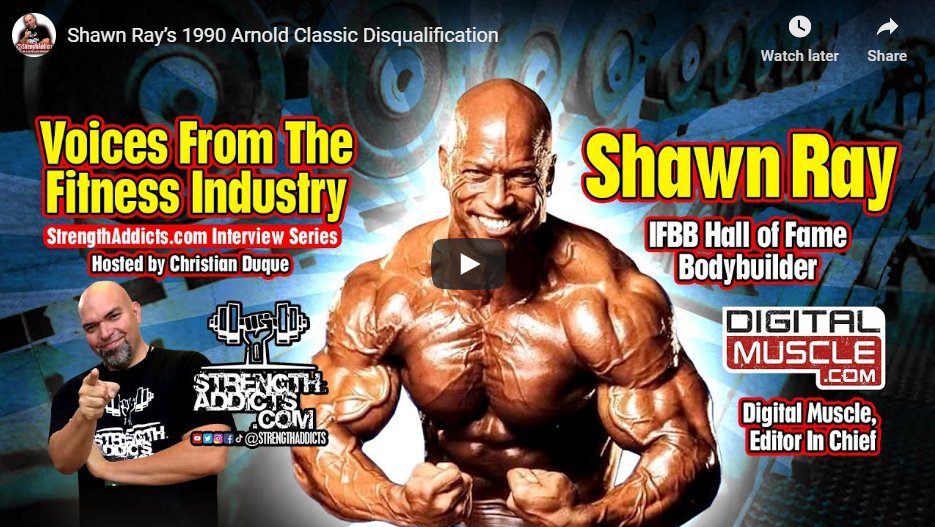 Let me just come out and say it – I think drug testing in bodybuilding is silly (unless it’s for natural shows). I think testing in general is just a cat and mouse game, anyways, but major league sports seem to see great value in it. Performance Enhancing Drugs (PED’s) are in every sport – whether you want to admit it or not. They’re definitely in physique-based sports and strength-based sports.

The drugs don’t make champions! If you gave PED’s to everyone, the champions would still be the best because these compounds only assist already gifted individuals. And gifted may, in fact, not even state the full case. Many great champions do, in fact, have God-given abilities, but a great many others simply out-work their competition – they’ll eat better, train with more heart, and they’ll follow the directives of their coaches to the letter. It’s that combination between genetics, discipline, and hard work that produces great champions.

Nonetheless, sometimes testing is conducted on a whole or randomly, to keep accountability, eradicate the use of particular substances, and/or simply as a reaction to external influences.

PED’s had largely been out of sight and mind for much of the 1980’s and when they did get talked about, it really wasn’t anything negative. This all changed with the Anabolic Steroids Control Act of 1990. This was a very bizarre year for testing in all sports, most definitely including bodybuilding. The two biggest contests, the Arnold Classic and Mr. Olympia, were tested rigidly. As previously stated, the champions remained the same, because champions always rise to the top; however, physiques did change. Drug testing made both of these mammoth events quite difficult to say the least, with many competitors failing drug tests and being disqualified.

I recently did a great interview with IFBB Hall of Fame Bodybuilder “Sugar” Shawn Ray for StrengthAddicts.com where we discussed this period at length. A key part of the interview focused on Shawn’s DQ from the 1990 Arnold Classic, after he won the contest, no less, and another interesting testing story some eleven years later at the 2001 Mr. Olympia, involving runner-up (and future Mr. Olympia) Jay Cutler. In this article, I’ll discuss both cases, as interpreted from Shawn’s accounts, and how the outcomes were totally different.

Back in 1990, everyone had become fixated on gear, but for all the wrong reasons. This is when the real media witch hunt started, when elected officials set their sights on, largely, harmless supplements that fought against muscle wasting, increased lean muscle tissue, and helped countless individuals shed fat. My gosh, what a colossal waste of taxpayer resources.

The government didn’t go after snack makers shoveling cheap ingredients and high fructose corn syrup to millions of kids, but they went after products being used by adults, which promoted health, instead. Anyways, let me get off my soapbox. The bottom line is that steroids became the enemy and everyone, from sporting federations to sporting teams couldn’t run away fast enough. What’s crazy about the 1990 Arnold Classic from what Shawn told me, is that he competed, won the contest, and reaped all the media fanfare for at least a good 1-2 months before his test results came back. By the time it became known he failed, this twenty-something had already been celebrated throughout the world. When Wayne Demilia told him his title would be stripped, the guy who would be crowned champion, would essentially get it in the mail and by the time it came to giving him any press, all the magazines were already focused on the Mr. Olympia. Poor Mike Ashley may have received the check for $60k, but he didn’t get any of the love.

I was curious, though, why didn’t Shawn fight? He was quite candid on the interview, saying he reached out to The Master Blaster, himself, Joe Weider. Shawn had had a very good relationship with Joe and he valued this so much, that he took the Godfather of Modern Bodybuilding’s advice to heart. Joe told him that he had already qualified for the Olympia through his placing at the Ironman and to make sure he passed the test at the Olympia. In addition to being a friend and mentor, Joe was Shawn’s sponsor, so his advice was always chalked full of wisdom. And it’s that friendship and advice which may have removed any idea from Shawn’s head to fight the test. It was that same loyalty to Joe, that ultimately saw Shawn turn the WBF down from lucrative contracts priced at $225,000 for Year 1 and $250,000 for Year 2 had he jumped ship for the new organization, which launched later in 1990. Shawn wanted to be Mr. Olympia – that was his #1 goal – so fighting over $60k simply wasn’t something to end a career over.

In addition to Shawn’s unique situation, given the fact he was on the ascent and he was signed with Weider, the idea of taking on the IFBB must have been foreign to most athletes then; I know it’s got to be today, as well. That being said, 4x Mr. Olympia Jay Cutler seems to have been willing to do just that, if he’d been disqualified in 2001.

From Shawn’s account, Jay’s urine sample came back dirty, but instead of accepting the possibility of being disqualified from the 2001 Mr. Olympia, Jay threatened to take legal action over the handling of the samples. Chain of custody is key and if Jay found any instances of foul play or negligence, then that would have been a very strong legal contention. Think about it, if there was absolutely anything wrong in the handling of those samples, wouldn’t you want to be 100% certain that the samples provided, were the samples tested, and that everything was done 100% according to protocol? I know I would.

Also, that 2001 Mr. Olympia happens to be one of the most talked about in the recent history of bodybuilding. It’s one of those rare, rare instances when a challenger led a defending champion at the prejudging. That sort of thing just doesn’t happen in bodybuilding – at least not often. Further, it wasn’t a veteran who was about to upset then 3x Mr. Olympia Ronnie Coleman, but a guy who literally came out of nowhere. Now, that being said, if Jay had been DQ’ed, then as Shawn says, he would have moved up to 3rd for his final Olympia. Not only that, but The Maryland Muscle Machine would’ve moved up to runner-up. Nothing of the sort happened though because Jay was willing to take the fight into a courtroom – if need be. So what was different about Jay’s 2001 issue and Shawn’s 1990 one?

Shawn says that in 2001 Wayne Demilia simply didn’t want the negative press and caved to Cutler. Who knows, if Shawn had fought in 1990, maybe Demilia would have caved then too. It’s also quite astounding just how much power Wayne had back in the day and it’s also noteworthy that standing up didn’t even have the blowback many thought it might. Wayne’s days were numbered though, as he’d leave in 2003, and Cutler would go on to win many, many titles, including four Olympia’s. Jay, like Shawn, also had close ties to Weider, was also in all the magazines, and was/is considered as loyal to the sport as anyone. Both guys seem to have failed drug tests, both at huge events, but each had a totally different outcome. I guess the bigger question for me is, which guy played it right? I can see merit in how both each guy handled it, but what I’d really like to know is what you think? I’m serious, you guys are the ones who really matter!! Public opinion is very, very important, even if some sports make it seem like nothing more than statistical noise or background music.

I hope you enjoyed reading my article, here, at IronMagazine. As I said, I’m dying to know what you think. Both these cases are so similar, yet concluded so differently. Please share your feedback in the comments.