Newer PostDid the Media do the Mr Olympia 212 Wrong?
Older PostFox News Publishes Dishonest Story About Death from Protein Use
Share on FacebookShare on TwitterShare on LinkedinShare on Pinterest 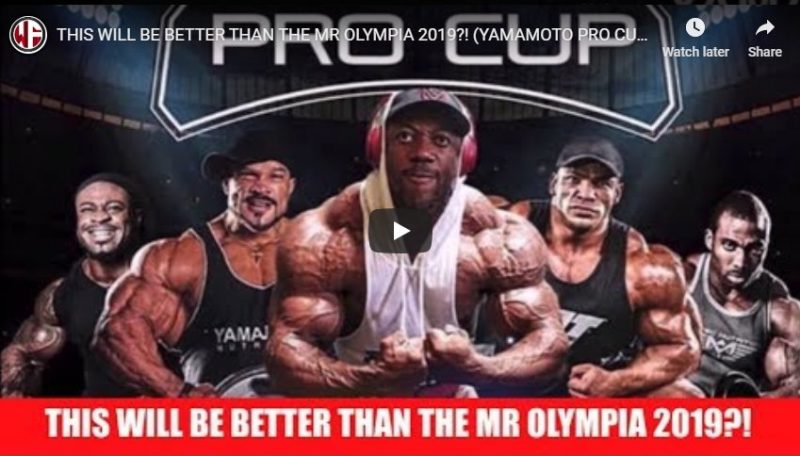 It’s hard to see past the glitz and glamour of the Olympia production, but at the end of the day, people come to see the competitors on stage. And with some key individuals not at this year’s Olympia, it forces them to get excited about the next competition they will all be at. Which brings up the next pro show. Everyone has been talking about the IFBB Yamamoto Pro Cup being held in Padova, Italy the week after the Olympia. So, I wanted to toss my two cents in as well and discuss what I see it turning out to be and my reasoning.

It’s Just Not the Same

Last year Rhoden upset the champ to break Phil Heath’s Olympia winning streak – and good for him, he looked great. And for the second straight year, we’ve got a new champ. But was this year’s Olympia the same as previous years? In my opinion, no. Here’s the bottom line, Phil wasn’t in the mix (and who knows, maybe he retired?), Shawn wasn’t allowed to compete, and Ramy decided to not qualify for the show and had to sit out (which I honestly don’t understand his reasoning for).

So, let’s recap: No Shawn, no Phil, no Ramy. Three competitors everyone wanted to see. Did this cause the 2019 Olympia to have a dark cloud over it? I think so. It was full of controversies left and right. I honestly feel bad that Dan Solomon took over the show and was dropped bad news after bad news on his lap and had to turn nothing into something. I can’t imagine the level of stress he was under to put on a great show that everyone expects to see when they come to Vegas.

Now, that’s no disrespect to any of the competitors who stepped on stage but let’s be serious, had the three competitors mentioned above been in the line-up, things would be drastically different. I was not present at this year’s Olympia but from the people whom I spoke with, they mentioned that the overall atmosphere of the show was off and it didn’t feel the same as it did in previous years. Which brings up the next topic being the Yamamoto Pro Cup and if it has the potential to be bigger than the O.

Will the Yamamoto Pro Cup Be Bigger Than The O?

At the time of writing this article, I have not seen the accurate and updated list of competitors to be competing at the Yamamoto Pro Cup. However, from the marketing materials released online, it appears that many of the BIG names will be competing. Some of these names include Shawn Rhoden (who hasn’t been on stage all year and was banned from the Olympia), Big Ramy, William Bonac, Cedric McMillan, and Roelly Winklaar.

In essence, if this line-up were to be accurate, this SHOULD HAVE BEEN what the Olympia looked like. Because of the potential to see all of these competitors on the same stage (basically adding Shawn and Ramy to, what was, the Olympia line-up), I believe this show could be bigger and more exciting than the Olympia.

Why is that? Here’s why I think the Yamamoto Pro Cup will be bigger than the Olympia.

No offense to the other competitors but it’s hard to not see Rhoden and Ramy in the line-up. Not having them included just feels different. Then you add in that Phil is sitting out and the atmosphere is similar to when a new era of bodybuilding is started. Who knows? If Phil actually retires and no one knows where the legal process will take Shawn’s case, but we could potentially witness a new era taking place as we speak. But seeing (potentially) Shawn and Big Ramy on stage is definitely exciting.

Everyone loves a good comeback. It’s the reason we all wanted to see Phil and Shawn on the Olympia stage battling it out again to see if Phil can come back for number eight and regain his crown or if Shawn can once again bring a package superior to The Gift. Now that the Olympia is over and we know that won’t take place, what’s next? Well, the Yamamoto Pro Cup where Shawn looks to be competing.

What will Ramy Bring?

Along the same lines as Shawn, we aren’t 100% sure (at least at the time of writing this article) that Ramy will show up in Italy to compete at the Yamamoto Pro Cup. From his pictures and videos, it sure looks like he’s in shape and preparing to be there, but I can’t say just yet with certainty. If he does show up, how will he look? We all know that on any given day Ramy can look drastically different. Leading up to previous Olympia’s, all eyes were on Ramy and the package he will bring – only for all of us to be disappointed that he, yet again, missed his mark. So, what will he bring if he shows up in Italy at his best? Could he win his first show of the year or will disappoint us all again?

It’s been a rough year for bodybuilding. We’ve had a lot of black eyes and unfortunate moments. While it opened the door for many competitors, it was overshadowed by everything that has gone one since we really didn’t get to see the best of the best compete for the Sandow with the likes of Phil, Shawn, and Ramy out of the mix.

I can only speak for myself, but from seeing and hearing things online, the talk is the Yamamoto Pro Cup and who all will step on stage and if the big names are there, who will come out on top. Personally, I hope to see Shawn there. I’ve been watching his “prep,” as well as Ramy’s, and should they all go head-to-head it’s really anyone’s show to win.

What I am hoping, is that Phil takes this year off (2019) and gets the bug to step back on stage. I hope Shawn is cleared from his allegations and is allowed to compete at the 2020 Olympia. I hope Ramy figures out what he’s doing and we see him at his best on the 2020 Olympia stage. As you can see, I have a lot of “hopes” in there. I guess assuming the stars all align, maybe this all will come true. But only time will tell.