Newer PostWhat’s Up With Big Ramy?
Older PostBone Broth Protein: Yah or Nah?
Share on FacebookShare on TwitterShare on LinkedinShare on Pinterest 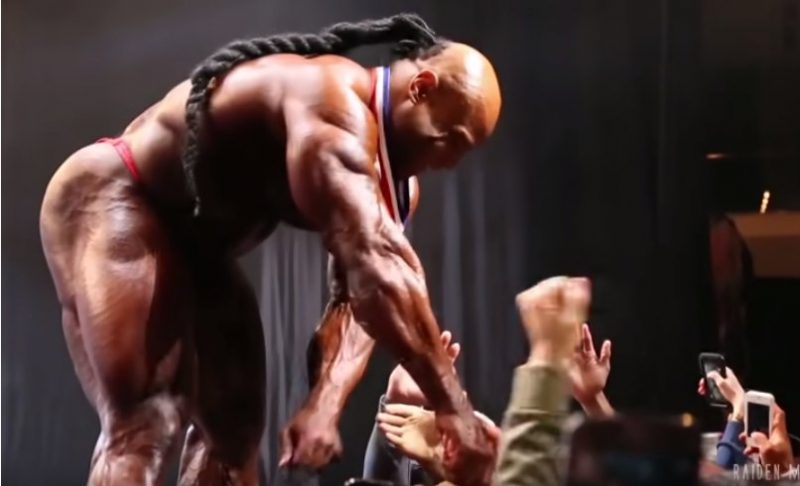 Ok, I’ll bite. I’ve tried to so long to ignore this “news story,” because it’s not a news story. It’s not anything – except for clickbait. I don’t fault Kai, because he does appearances and agrees to do interviews because he’s promoting a lot of projects – he has no control over what he’s asked, and even if he did, do you think journalists won’t ask anyways?

Journalists post-1980’s have gotten a lot more aggressive. There’s no such thing as a question that’s “too personal” or off limits – that only makes asking the question that much more tantalizing. If the interviewee dodges enough questions, gets uptight, or if the mood gets awkward, these are all factors which raise the interest levels of the viewer. People want instant gratification because of the internet, they want as much of a story as they can get, and it just creates for a very vicious cycle. That being said, Kai Greene is also a promotional mastermind and he knows that most, if not all, of his interview requests, will hinge on the big question. The question everyone asks, but who no one (in 5yrs), ever gets a direct answer to, is, will Kai Greene compete at the Mr. Olympia again?

On a recent IML IG Live, one of our longtime, hardcore, friends, Abdiel, stated it best. He said, he didn’t think (even) Kai knew what he wanted. You know, there could be a lot of truth in that statement. What if, Greene is simply using the pretext of wanting something, as a reason for not competing?

Kai always makes it seem like he’s signed some sort of a confidentiality agreement, like he’s silenced by contract, and I don’t know that to be the case, either. He also claims that what he knows on certain matters, can’t be repeated to the common folk, it’s reserved for the higher-ups. During Shakesperian times, plays were written to entertain various social classes. If you were dirt poor, you sat in the nosebleed seats and laughed to primitive jokes (if you were rich, you acted as if the blue collar humor was beneath you); if you were loaded, you sat up close, and you laughed at the jokes written for you (even if they weren’t funny). When the punchline came for the high society jokes, the common folk were oblivious (at least that was the author’s hope). When Kai speaks to the fans about high level matters, it’s almost like William Shakespeare writing for the dumbasses sitting so far back, the actors look like ants. Kai likes to pretend like there’s a whole world we don’t know about, when in reality, he’s probably full of it.

What could he possibly want?

Years ago, the talk of the town, was that he was after a free both for his company. The most expensive booth I’ve ever heard of, was 5%’s at the 2015 or 2016 Arnold, for something in the neighborhood of a 100k. Even if we were talkin about a booth, the prize money for the Mr. O is well over 4x that!! Why not do a contest where you can win close to half a million dollars, in two days, because of a booth? That makes no sense and that was probably never it. So what could it be?

You don’t suppose Kai wants an ownership stake in the contest? That would be unheard of, but if he wanted, say 5-10pts, that might be one of those impossible type requests that’s kept him from the stage. Maybe he wants to a lion’s share of the promo, but he’d have no problem getting that. In fact, the Mr. Olympia we have now, is so secure, so chill, and so laid back, he might even let Kai be front and center. It won’t matter in the end, because Shawn will beat him, just like he’ll beat everyone else. Promo can’t be the 10,000 lb elephant in the room. So again,… what could he possibly want?

I know one thing for sure, Kai’s come very close to winning a Sandow before; however, he’s never been able to seal the deal. I also know that based on his many, successful ventures, he would look rather silly to return to the Olympia stage and place poorly. It’s one thing if he didn’t win, but could you imagine if he finished outside the Top 3, outside the Top 6, what if he didn’t even make the Top 10. Now I know, most Kai fanatics will probably be fuming at such a question, but this guy hasn’t been on an Olympia stage in five years! Do you honestly think he can beat guys like William Bonac, Roelly Winklaar, and reigning Arnold Classic champion, Brandon Curry, just like that? And what about Dexter Jackson? I know Dex is trying to get everyone to overlook and pretty much leave him for dead, but this guy is a Mr. Olympia and a 9x Arnold Champ – ANYONE WHO THINKS DEXTER ISN’T A THREAT, DOESN’T KNOW BODYBUILDING. Kai isn’t going to just get on stage and find himself battling with Shawn for the Sandow; he’ll have a war just being into the Top 10. I can’t imagine Kai would expect any assurances as to how he’d do in a lineup today, that’s all determined on contest day, during the mandatories, and comparisons.

I have zero idea as to what could keep The Predator from the stage. Does he even still want it? The idea that the sport can’t go on without him – is simply ridiculous. We’ve had some great Olympias without him and 2019 is shaping up to be an amazing showdown – and that’s without Kai, Phil, or even Big Ramy. No one, single person makes or breaks the biggest contest in professional bodybuilding and fitness. If you think otherwise, God Bless you, but you couldn’t be more off!

In the end, I don’t know any more now, than I did upon writing this article, and that’s the same reality everyone’s at after watching any one (of many) interviews on this point. The one and only thing that’s for sure, is time. The Olympia has endless amounts of it, but Kai doesn’t. WIth each year that passes, his chances for coming back and winning a Sandow become more and more remote. If anyone thinks that just because he’s walkin around swole, that he can snap back into contest shape from 5yrs ago, like it’s no one’s business, let’s just say you have a lot of faith. I, on the other hand, think that ship has sailed. While Greene may be very careful not to give the Olympia any promo, he’s certainly making sure he gets as much of it as possible, for himself and his businesses. One thing’s FOR SURE, Kai is one heck of a shrewd businessman, but the only thing stopping him from competing – is him. There’s nothing AMI/Weider is denying him. That’s my take.

In closing, I hope you enjoyed reading this article, here, at Iron Magazine. More importantly than anything I’ve said, I’d like to know, what YOU think? Also be sure to use discount code “IML15” when shopping at IronMag Labs, to Save 15% Off.