What Has the Closure of Ultimate Nutrition Taught Us? 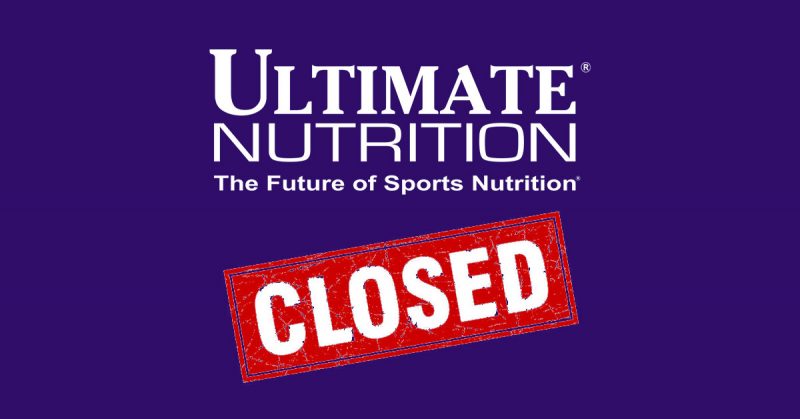 Back in December of 2014, Connecticut-based supplement manufacturer, Ultimate Nutrition filed for Chapter 11 protection (bankruptcy). Representatives of the brand mentioned that the reason for doing such was due to issues with refinancing their $13M loan. This may have come as a surprise to many as they supply their brand to more than 144 countries.

This, unfortunately, wasn’t the only issues stemming from Ultimate Nutrition as their wounds are more than superficial. In fact, they were having issues with the USDA as well. According to USDA citations, Ultimate Nutrition was finding themselves in trouble for not meeting label claims and having quality control issues.

Ultimate Nutrition had a long history in the supplement industry – stemming all the way back to their start in 1979. After a long run and issues compounding on top of other issues, Ultimate Nutrition closed their doors for good and in a manner that many are criticizing. It was August 17, 2019, when a note left on the business’ door read the following:

“Ultimate NutritionIf you are reading this, please be informed that your employment has been terminated effective August 17, 2019.

A packet of information will be sent to your mailing address within the next few days.

If you do not receive the packet or have any questions you can contact us by writing to us at PO BOX 643, Farmington, CT 06034.

We wish you the best of luck in your future endeavors.”

I’m not going to lie, that’s pretty messed up. Not only was it a note left on the door, but it was on a Saturday which allows social media to blow up and have employees find out through social rather than for themselves or other employees. The entire note came off in a negative tone without any sincerity or even appreciation towards the employees who all instantly lost their jobs and income. Personally, I have lost all respect for the owners and executives of (the now closed) Ultimate Nutrition. It’s messages like that which make me feel as though the brand failed because of them and their poor decisions and for no other reason. It started from the top.

So, what all can we learn from the event of Ultimate Nutrition closing? Let’s touch on a few of the key points (these are in my opinion).

1. Things Aren’t Always How They Appear

It’s easy playing an arm-chair quarterback when you’re not on the front line and be thinking you know everything when below the surface you know absolutely nothing. And that’s what the Ultimate Nutrition employees are feeling.

Ultimate Nutrition closed their doors with no notice to their employees, no warning in advance that they may go out of business, no “hey, we’re having issues,” NOTHING. I’ve even recently been seeing some of their employees posting online that they have some cool things coming and to “stay tuned.” I’m assuming they were hinting at the news is a closure?

I’m saying all of this from my point of view and my opinion, so don’t think I know all the secrets and am breaking the news with any of this. However, anyone who watched what Ultimate Nutrition was doing knows they were spending money foolishly. If you were having issues with your loan, why would you be out there spending tons of money on things and drawing straws in hopes that something happens? I get it. You can’t sit back and do nothing. But at least strategize about what could bring you the most return on your investments. Or hire a consultant.

Sponsoring the Olympia was a dumb play. They probably never saw anywhere close to the return they were expecting on that. Then you have all of the athletes they sponsored. Look, I love Dexter Jackson and Phil Heath, but no one cares anymore about what athletes are with what brands. The brand didn’t make the athlete so stop acting like your products are the best out there because you have certain athletes (who are only there because you’re paying them a ton of money).

Do I really even need to explain this point? What have you seen from Ultimate Nutrition over the years that set the industry on fire? Nothing. Not a damn thing. Their brand was vanilla. They were living in the past thinking that their legacy status in the industry meant something. Now, was their lack of innovation due to their lack of money? Maybe? But at the end of the day, there was a lot they could have done to help the brand that they didn’t. So, in the end, it’s still their fault regardless if they had the money or not.

Let’s face it, no one was loyal to Ultimate Nutrition. Heck, I don’t even know if their own employees were loyal to the brand. They did NOTHING to engage with their consumer. And sponsoring shows does NOT mean they were supporting their consumers. They didn’t build a culture or community around their brand – not in the US and not overseas.

Just because you show up to expos and hand out samples doesn’t mean anything. Heck, I’d walk around with my hand out for samples, too, if someone was offering. That doesn’t mean I’m going to be loyal to their brand.

When you live by price you die by price. The moment you try to be one of the lowest-priced around is the day your business starts going downhill. By lowing your price, you’re basically devaluing your brand. You’re telling the consumer that you don’t have high-quality ingredients and basically belong on a Wal-Mart shelf.

People who see a moderately priced product assume there is some sort of quality behind it. If you purchased a $250,000 sports car for years and then saw a sports car that was priced at $50,000, would you assume it has the same parts and quality that the $250,000 sports car has? Absolutely not. You’re left scratching your head and wondering what is different and where the catch is. The same thing applies to supplements.