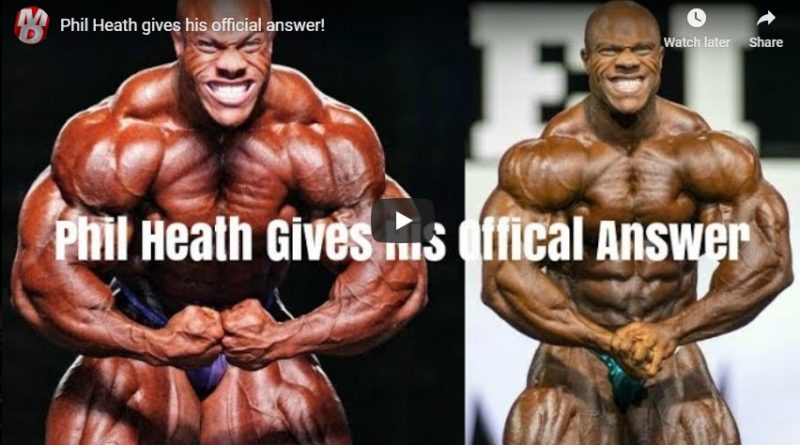 Fans all over the world were shocked when the news broke that 7x Mr. Olympia Phil “The Gift’ Heath was officially not doing the biggest contest in bodybuilding. His diehard fans, in particular, hoped that Heath would return to reclaim the title (they believe) he narrowly lost last year. If we were only to take Phil’s demeanor following the contest, then there wouldn’t be any real reason these folks would feel so let down, but there’s quite a bit of room for debate insofar as to what Heath’s true intentions were.

In fact, I’ve spoken with industry insiders, as recently as the Masters Nationals, who were literally convinced Heath was competing. This is largely because Phil has been sending out a lot of mixed signals. In a recent article for Iron Magazine, I made the direct comparison between Heath and Kai Greene. Kai has made Olympia Hinting into a second career. He’s been playing with the media, the promoters, and (sadly) with the fans, for a long, long time. I don’t know if he’s doing it to sell more of his products, if he’s doing it because he wants to remain relevant, if he wants to create utter chaos OR if he actually wants to come back, but ultimately, always decides against. Phil has put on size, released training videos out of the blue, and dodged questions that could have easily been answered in a matter of fifteen seconds. Unlike Kai who has a booming supplement line, clothing, books and a movie career, I’m not exactly sure what Phil’s got going on. I also know for a fact that Phil does not have the kind of following Kai has – he didn’t have it during his run and he doesn’t have it now; however, it seems The Predator’s approach has become The Gift’s. The question now becomes what’s in the future for Phil? We can talk sour grapes and kick rocks like the other outlets, but we’ve known Phil was out for a while. It was pretty obvious to us.

Phil Heath is still a relatively young man. People need to understand that he really had no amateur career. When you look at guys like Bob Cicherillo or Vinny Galanti, they spent a lion’s share of their time in the amateur ranks battling for a card. Phil literally did a couple of shows and right out the gate was winning pro shows. The fact he only did one show a year while he was Mr. Olympia also kept his physique young. He’s had some minor injuries and corrected those. The hernias were more major, but those too are corrected. What I really mean by major injuries would be something like what’s happened with Ronnie and/or more complicated issues like what ultimately sidelined Dennis Wolf. In Phil’s case, he’s really back to 100%, he’s young, and everyone (including me) knows he could walk into the Olympia, at 100%, and more than likely win the Sandow. So why doesn’t he?

In a strange way, I think he’ll only come back when he can face Shawn Rhoden again. He doesn’t want to beat Brandon, Roelly, or William. He’s beat them before. Now, mind you, he beat them THEN, this is NOW. Could he beat the Brandon Curry of today as easily as yesteryear? I say no. The Brandon Curry of right now is a freak, a monster, a guy who could stand next to the best of them. The Brandon Curry of now would have made Shawn fight down to the wire and who knows where the pieces would have fallen when the dust cleared. The point, though, is Phil may not want any part of the Brandon Train. If he lost to Rhoden and in a half-assed comeback attempt had Brandon shut him out, he and his legacy would be done. So perhaps, the heart just wasn’t there, but I think it’s the fact Shawn’s not there.

Phil wants Shawn. If I’m right, Phil wants to come back when Shawn is competing. He wants to crush him in the pre-judging, he wants to see him struggle to hold on, he wants to blow everyone’s mind at the night show with the best routine of his entire career and he wants to seal the deal by psychologically breaking Rhoden and dwarfing him at the pose down. He wants it to be just him and Shawn, standing there, and he wants his name called out. I’m not sure what he’d say or do, but the focus wouldn’t be on Sandow, the check, or the photographers. It’d be like a street fight and I almost think Phil wants to relish in seeing defeat on Rhoden’s face. But that’s just my take and I’m probably way off, because my theory would only be right if Phil Heath was a raving narcissist who could never play down Shawn beating him. The only way I’m right is if Phil didn’t even care about the half million dollars, didn’t care about the 8th Sandow, and didn’t even care about tying Haney and Coleman. If I’m right, Phil would only want to come back to put Rhoden in the place he feels he belongs, give whoever he perceives wronged him the universal salute, and then either do a mic drop retirement or go for 9 and then do it. That being said, I’m probably way off, because Phil is one of the most humble, soft-spoken, and low key guys I know in the industry. In fact, my theory falls just short of being a drastic mischaracterization and for that I apologize. It’s a burden I must a bear, it’s a heavy cross I must drag.

That being said, this Mr. Olympia will be one for the record books. We have a vacant title, we have people coming from all over the world to Las Vegas, NV, and with the leadership of Dan Solomon, the sky’s the limit!! I, personally, think the involvement of Mark Wahlberg is huge!! I love all his movies, especially Rockstar!! I know that’s not one of his favorite roles, but I’m a glam metal fanatic and I think he killed it as the lead singer of Steel Dragon!! STAND UP AND SHOUT!!!! I also think having Jay Cutler involved is huge!! Jay remains one of the most popular and respected Mr. Olympias of the modern era.

I hope you enjoyed reading my article, here at Iron Magazine, and I’d like to remind you to use discount code IML15 to Save 15% Off when shopping at IronMagLabs.com . Also don’t forget to check out the new CBD Gummies!! They taste absolutely awesome and I love them in conjunction with Dream ‘N Grow. Remember, you can’t grow, if you’re not recovering. See you all soon at the Olympia!