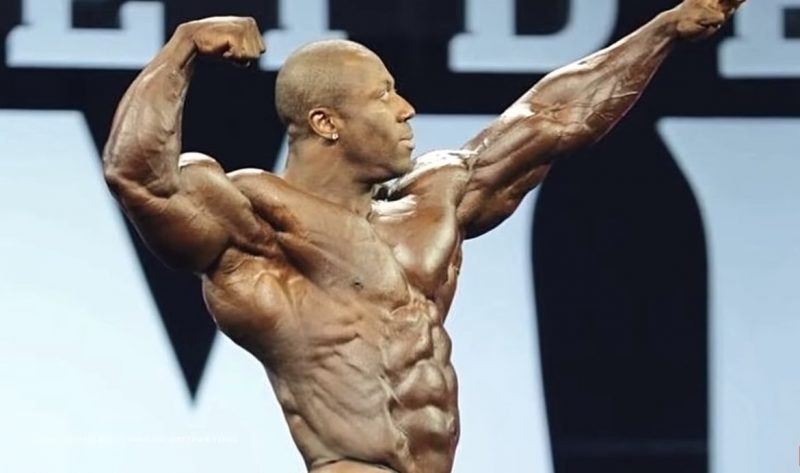 We all know who Shawn “Flexatron” Rhoden is; he’s our reigning Mr. Olympia. He’s a man with millions of fans all around the world and he’s built the kind of physique most humans can only dream about. He knows all there is to know about bodybuilding. Together with his contest prep guru, Chris “The Technician” Aceto, Rhoden has defeated all the big names in bodybuilding, from Big Ramy to Dexter Jackson, all the way to denying 7x Mr. Olympia Phil “The Gift” Heath from the chance of making history, tying The Big Nasty Ronnie Coleman and the Totally Awesome Lee Haney for eight Olympia’s. In fact, Rhoden did what Kai Greene never could do. He not only defeated Heath, but it wasn’t even close, it was a total knockout.

So it’s safe to say that Rhoden knows bodybuilding. He also knows how to pose. There aren’t a lot of guest posing opportunities anymore and there’s even fewer bodybuilders who have the nerve to get on stage, alone, and create a routine that keeps the audience entertained throughout an intermission. Shawn Rhoden has always had a healthy number of posing appearances, because promoters know the quality physique he brings, how he can show it to the audience, and the star power he exudes during the routine and during his speech. I still hear from promoters who contracted previous Mr. O’s to come guest pose who looked like absolute garbage when they’d showed up at their contests. The fact Shawn shows promoters respect, kind of works its way into what I’m talking about in this article today. Shawn has always been a consummate professional as an athlete, so it only makes logical sense that he’d be a total success as a promoter. In this article I’d like to talk about Shawn as a contest promoter and why it makes so much sense for top tier Pro athletes to have their own shows.

Contest promotion is hard work. I don’t ever want to say, write, or imply otherwise. It’s not something just anyone can try and take to like riding a bicycle or tying your shoes. There have been countless individuals who have tried it, many with strong business skills, who just have had to bow out gracefully. Others don’t even to get to bow out so gracefully, either. The truth of the matter is that you have to have the ability to secure a great venue, a great crew, and of course you have to market it in such a way that competitors will want to compete there. Also, you have to get in line. That’s right! Most places have way more NPC contests than they need, so to have yet another one, might prove to be unrealistic. A promoter has to be ready to deal with obstacles, especially bumps in the road. Some contests, much like any small business, may present losses at first, sometimes a promoter will be grateful to break even a few years, until finally seeing profits; if the promoter doesn’t have the resources to sustain tough years, then the contest may not truly stand the test of time.

Professional athletes, particularly those on the top tier, are very aware of their surroundings. I’ve found that the top guys are always eager to learn. They’ll learn from the media, they’ll learn from the supplement companies that sign them, and they, of course, learn from the promoters. The clock-watchers and the ones who want to have as little interaction with people as possible, are extremely shortsighted. Once they get older and no longer compete, they start to see their earning abilities initially diminish, then almost entirely disappear. If you’re in the fitness game and don’t plan ahead – then you have only yourself to blame!!

Shawn Rhoden is the type of athlete who’s obviously learned, asked questions, and gotten several different educations in different aspects of the sport, during his rise to the very top. I, first, saw the posters for his Shawn Rhoden Classic at Jim Manion’s Pittsburgh Pro in May 2018. That’s right folks, even seven months out, the pull-up displays were out in full force. To some, promoting an event seven months out may seem like a little much, but when your contest is part of your livelihood and when your contest is yet one more representation of your work in an industry, then you pull out all the stops. And that’s just what Flexaton did!!

Just take note of the venue!! The Shawn Rhoden Classic was held at the world renown Solaire Theater in the Solaire Resort and Casino, in the metropolis city of Manila, capital of the Philippines. Just that fact alone it was held there, was a major head-turner. Then you look at the media coverage in the house and just who was involved in the planning, promotion, and logistics, and it became abundantly clear why so many heavy-hitters from the U.S. were booking flights to Manila. The fact the promoter had won a series of titles, then, not to mention the Mr. Olympia, created a fantastic level of interest and stellar outpouring of support. The reality of the matter though, is that even without the Sandow, Flexatron was already running the contest like he was born to be a promoter. Life, though, sometimes gives us blessings, and the fact he’s now the best in the world, shows us that Flexatron has reached the highest point as a competitor and is well on his way to doing the same as a promoter.

A lot of people always ask, “what’s it’s take to be successful?” They also like to ask “what’s it take to be the best?” These folks spend tons of money, invest tons of time and effort, on get rich quick schemes or mumbo jumbo programs, searching for a simple truth. Little do they realize, that the best advice they need, they already know; they’ve probably been hearing it since they were kids. It’s all about hard work – plain and simple.

Even for the 2018 Mr. Olympia, how many people were predicting Rhoden? NO ONE!! How many people laughed when I said he’d win? Countless. The truth of the matter is, when you want something and give 100%, then you have a really good chance of getting it. When the fans and commentators were remarking that Rhoden could barely stand on his own, let alone walk, they just then realized how much this man suffered, how much he gave, where he could barely even stand straight. The comfort and excitement after the show didn’t matter, I’m sure Rhoden never even thought anything beyond the stage while in prep, especially those last few days, those last few hours. He was a man on a mission; he knew what he had to do and he did it!! The same is the case as a promoter. A man like Rhoden knows no failure and neither should you. If you fail despite giving 100%, then there’s no shame in that; however, most who give 100% don’t fail flat on their face. Always give your best, like the champ, Shawn Rhoden!!
The contest was a huge success!! The athletes loved it, the fans couldn’t get enough, and the 2018 Mr. Olympia helped grow the sport of bodybuilding in yet another country. Who could ask for a better outcome? I hope you enjoyed reading this article. I look forward to your comments – whether here at Iron Magazine or wherever you may you see this article.