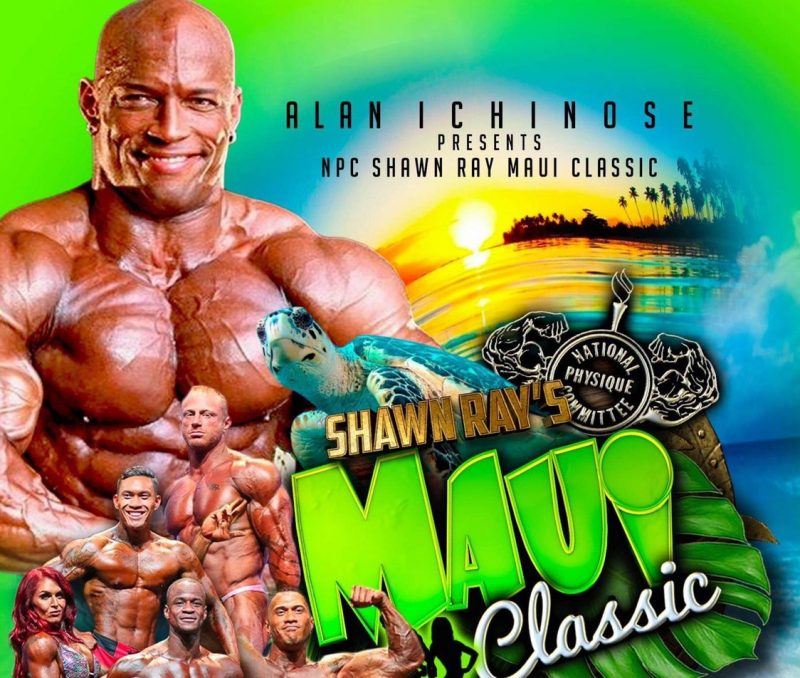 “Sugar” Shawn Ray is a man known throughout the world. He’s considered to have been one of the greatest pound for pound bodybuilders of his day. He’s won a series of major titles, including the Arnold Classic, and placed among the very best in numerous Mr. Olympias. He’s served as the Athlete’s Rep, worked for major publications like Muscular Development and major websites like Generation Iron, in addition to being featured in major motion films, documentaries, and specials. Shawn also covered bodybuilding for major television networks and was the face of countless supplement companies, domestically and internationally.

How many guys have had the life of “Sugar” Shawn Ray? Very few, I’d say. This Hall of Fame bodybuilder, journalist, and businessman, has also promoted a number of bodybuilding contests, spanning well over a decade – from his days in Colorado to the scenic beaches and countryside of Hawaii – and that my friends is the topic of today’s article. As the 2019 contest season approaches, with all the great many NPC and IFBB Pro League contests about to kick off, few are more talked about than Shawn Ray’s 2019 NPC Maui Classic, on Saturday, March 30th. There’s a great many reason why competitors, press, and fans should get over to this beautiful island paradise, from getting to meet the legend himself, Shawn Ray, to competing in a tropical destination few Americans will ever visit, to earning national qualification for all the big pro qualifiers like the NPC Masters Nationals, North Americans, USA’s, Nationals and the Universe.

Much has changed in the world of professional bodybuilding, particularly in how people get their news, get their coverage, and even how some of the sport’s younger adherents pick their heroes. In the grand scheme of things, today’s big names often find themselves getting mixed up in a world of toxic drama, accusations of using fake weights, and focusing more on becoming Instafamous than in building the kinds of physiques that were considered great in the 1990’s. The one thing that’s remained a pretty steady constant, is that the bodybuilders of yesteryear have acquired almost cult-like followings. Most people don’t get excited to see bodybuilders anymore, at least not the contemporaries of today. It’s a different world, one where an over-saturation of social media, has left very little to the imagination. Most fans today could be their heroes’ biographers – there’s very little they don’t know about them, because we live in a world that’s connected 24/7.

Some of the biggest names in our sport, are feeling the pressure that Hollywood stars and starlets have experienced from pretty much Day 1. Although TMZ doesn’t hound top bodybuilders – yet – I won’t be surprised if that day soon arrives. On that note, the bodybuilding press is doing a little bit of monkey see – monkey do. From keeping close tabs on personal websites, social media platforms, and through the tried and true tradition of keeping tipsters close by, the bodybuilding press knows pretty much everything. They’re the ultimate sleuths. Any bodybuilder who wants to stay under the radar, is almost forced to find him/herself a dungeon or bunker to train. Anywhere that has even a single bar of reception, can expose you to being on someone’s social media feed. It’s insane, but all it takes is one computer or one phone – and that’s it. Anonymity and secrecy is totally compromised. There’s no mystique anymore, there’s nothing left to chance, and that’s all the more reason the stars of yesteryear are giving the stars of today a run for their money.

What happens when Shawn Ray, Flex Wheeler, or Kevin Levrone go abroad? They get mobbed. It’s like when The Beatles first came to America or when they played The Ed Sullivan Show. Shawn Ray is no stranger to throngs of fans, waiting patiently, just for a chance to give him a high five, possibly get to say two words to him, and/or for the few, the lucky ones, perhaps can get a photo, maybe a short video clip, or maybe, if the stars align the right way, maybe even an autograph!

Meeting superstars like Shawn Ray at big fitness expos can be a major test in tenaciousness. These expos, no matter how large the venue that houses them may be, are basically one huge sardine can. It’s very easy to feel overwhelmed. People are constantly bumping into each other, everyone seems to be moving in opposite directions, and the few conversations, if any, are hurried. For fans of Shawn Ray, going to the NPC Maui, affords them an opportunity to actually meet the man, in the flesh, and have a much better chance of interacting with him.

For competitors getting on stage, it would be a huge honor to place high, win a class, and especially to win the overall at an IFBB Pro League Hall of Famer’s contest. Just imagine the bragging rights alone, on top of the fact of being nationally qualified, and the huge convenience of being able to enjoy this milestone achievement at the very beginning of the year. I think that’s where a lot of competitors set themselves up for failure. If you’re planning on qualifying way later in the year, you’re really not giving yourself enough time to properly peak for the big shows. For example, if you’re going to try to qualify at a local or regional contest, say 1-2 weeks before a massive, major contest like the North American Championships, you’re really not giving yourself a fighting chance. Some may have been able to do it, but why subject your body to that sort of stress? The smarter way is to qualify early, then take some time to really perfect your physique.

Also, not everyone may be on the same plan as you. I’ve seen competitors scope out a small local show, going into it at around 80%, only to have their asses handed to them. Newsflash – you’re probably not the only one looking for a quick national qualification – and – some of these more local contests are the Superbowl for local and regional competitors – that’s their national show, that’s their everything! Don’t ever make the mistake of thinking of any contest as a “warm-up show.” Again, I’m not looking to scare anyone, but this is the NPC, there are no “easy shows” and there are no “warm-up shows”; you could easily go into a small show and get your ass handed to you.

Be smart, get nationally qualified, ASAP.
Finally, Maui is a tropical destination. How many Americans will ever get to visit Maui? Most folks fly down to Florida, maybe cruise around the Caribbean, or possibly fly down to Cancun; however, traveling to Hawaii is almost unheard of. It’s really kind of wild to think about, because it’s a state in our country, but it’s so far away, so exotic, that most just never get to experience. There’s everything from scenic beaches, to lush green landscapes, volcanoes and a rich cultural history that’s felt in unique cuisine, music, and customs. I know so much about it, through book, but I, too, hope to step foot there one day. I know we’re talking about a bodybuilding show here, but why not make a vacation out of the whole experience, as well?

I hope you enjoyed reading this article and look forward to your comments – whether here at Iron Magazine or wherever you may see this story.