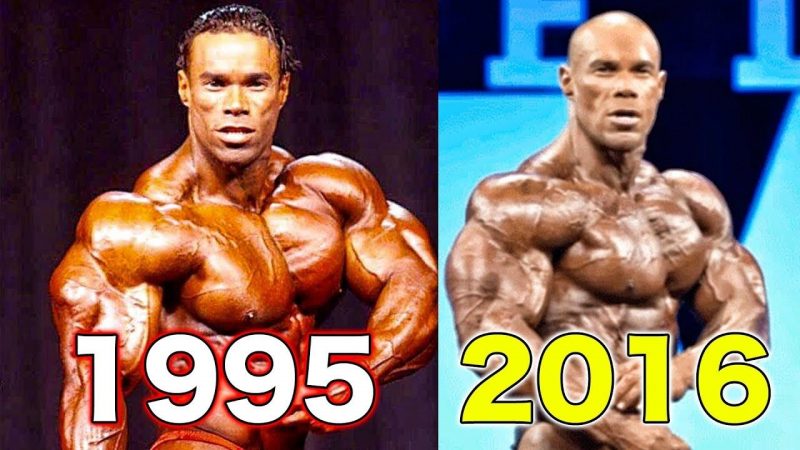 Although it may not be widely known, I played a minor role in helping bring Kevin Levrone and Generation Iron together. The collaboration was a huge one, as GI has done a great deal on behalf of developing itself as a bodybuilding media powerhouse. From their work with Shawn Ray, Flex Wheeler, and Kevin Levrone, their roster of IFBB Pro League Hall of Famers is as impressive as the movies, contest coverage, and articles they put out.

Born To Overcome was a documentary written around Kevin’s comeback to the Mr. Olympia, going all the way to his retirement in Australia. The film will be going to Amazon, where it’ll be available for all to enjoy. In this article, I’d like to touch upon that comeback. For many Kevin Levrone was a name they revered. They saw his photos in the magazines, they watched him with great interest over all the DVD’s from contests, eating the meals, and training with crazy weights with perfect form. Some knew him as Kevin Levrone, but most, knew him simply as, The Maryland Muscle Machine. There was real mystique as well. Even Maryland’s flag stands out from the rest. Take Levrone’s nickname, the quality of his muscle, and take into account his career as a musician with his band Full Blown, not to mention his work in Hollywood, and you have what’s known as a living legend. Countless people identified with Kevin, because he simply wouldn’t give up! It’s always so much easier to take the easy way out – whether that means to whine, to doubt yourself, or to quit. So many people have embraced mediocrity, that that’s all they know. One look at Kevin Levrone, and he’ll inspire even the most lost. This is what this article is all about. I also genuinely hope you get over to Amazon and rent or purchase this film – I know I will and so too will countless, real bodybuilding fans.

If you let pain get the best of you, you’re doomed. When Kevin was at this prime, he was firing on all cylinders, but when he made his comeback, he was considerably older, he hadn’t really trained like a bodybuilder, and he hadn’t competed. Let’s not forget, when Kevin left the sport, he went to Hollywood and his goal was to land major parts in big films. Hollywood isn’t bodybuilder-friendly. Although Arnold and Lou found work in the early 80’s, most films by the 2000’s weren’t going to give a 260 lb, ripped to shreds bodybuilder, any key parts, much less a starring role. Kevin could have defied the norm and essentially wasted his time, but he was going after acting with the same passion with which he went after bodybuilding and music. His band, Full Blown, sounded amazing and I wouldn’t be in the least bit surprised if they had major label interest, promoters wanting to book them on major concert packages, and/or the ability to sell out substantial venues throughout the country. Mediocrity is a word that I just don’t think was in Kevin’s vocabulary – not then, not now, not ever! He’s probably the last guy who I think would content himself with being average. Therefore, if he was going to act, he was going to be the best. He transformed his body from top bodybuilder, to movie star look, and then after more than a decade later, he set his sights on taking the stage one last time. The decision to compete wasn’t about making money – he sure as hell didn’t need a bigger audience and/or “to be relevant;” Kevin’s whole motivation to competing in bodybuilding again, was to make the fans happy, and give them what they wanted.

If you let pain get the best of you, you’re doomed. When Kevin returned to the sport, he was dealing with a very painful leg injury. He didn’t want the fans to know, much less to see, but I think showing the determination to get through it, became as important as the comeback itself. Always a consummate professional, Kevin accepted Mr. Jim Manion’s invitation to compete and of course, he was competing to win – he wasn’t going to cheat the media out of writing and commentating on all the buzz they naturally create. That buzz, while at times frustrating and petty, also has a way of ramping up interest in the sport and the contest. This is just how the social media cookie crumbles – people like a little drama (just take the recipe for success behind Pumping Iron); however, the main reason for the comeback was for the fans and overcoming adversity has always been a war cry of bodybuilding. When we saw Kevin at physical therapy, getting fluids drained, and in agony just to walk, then days later squatting 405 like it was a feather – that was a testament to the human will to succeed, to the human will to be the best humanly possible. That’s what Kevin Levrone’s comeback was ALL about!! And speaking to that point, I think that’s exactly what Generation Iron captured in Born To Overcome.

Everything about Kevin’s comeback transcends mere placings, even if we’re talking about the biggest contests in the sport. Levrone returned to launch a widely successful supplement company, he did an enormous amount of media, seminars at contests and may even potentially have his own show – who knows. He traveled the world, made peace with critics, and gave the fans a renewed take on the sport. It was more than nostalgia, I assure you of that. It’s one thing to return from yesteryear to sell a book, DVD, and talk about the good ole days, it’s quite another to come back and MAKE HISTORY. Most guys at 50+ would never get on stage next to young bucks, 5, 10, even 20 years their junior, but Kevin Levrone isn’t “most guys.” Also, when you think of bodybuilding, age should never be a factor; if ever there were sport that celebrated the underdog – it’s ours. It’s a people’s sport, hence why we have People’s Champions, and why some People’s Champions become more popular than those holding the gold medals.

When you think of yesteryear or the recent preps, you think of Kevin Levrone, donning sweats and a hoodie, in a quiet gym, with the flags of Maryland and the USA in the background. You think of your favorite song playing in the background and you think of a man on a mission. The more people hated on him for even daring to do what he did, the stronger the fire grew under him and the stronger the fire grew under every single person who wanted to overcome a mountain of adversity, whether setting a new PR, leaving a dead-end job, or embarking on a life-changing adventure. I’ve written extensively about the sport of bodybuilding and the indelible impact it’s had on countless people, from all walks of life, from NFL players to WWE wrestlers to major movie stars. There’s absolutely no question in my mind that Kevin has inspired a great many people to live better, happier lives. That’s what being a real role model is all about. That’s who Kevin Levrone is.

I can think of another great bodybuilder who sounds an awful lot like this; someone who, more or less, gave their life to bodybuilding and if given a chance to do all over again, probably wouldn’t change a thing.

I would encourage all bodybuilding fans to watch two movies ASAP, Ronnie Coleman – The King – and – Kevin Levrone – Born to Overcome, BOTH from Generation Iron. Both movies represent the very best bodybuilding has to offer and I’m very proud to write an article pointing that out. I hope you enjoyed reading this article at Iron Magazine and I look forward to reading your comments.