Newer PostFlexatron, Big Ramy To Compete at the 2020 Arnold Classic
Older PostAre High in Protein Claims Being Abused These Days?
Share on FacebookShare on TwitterShare on LinkedinShare on Pinterest 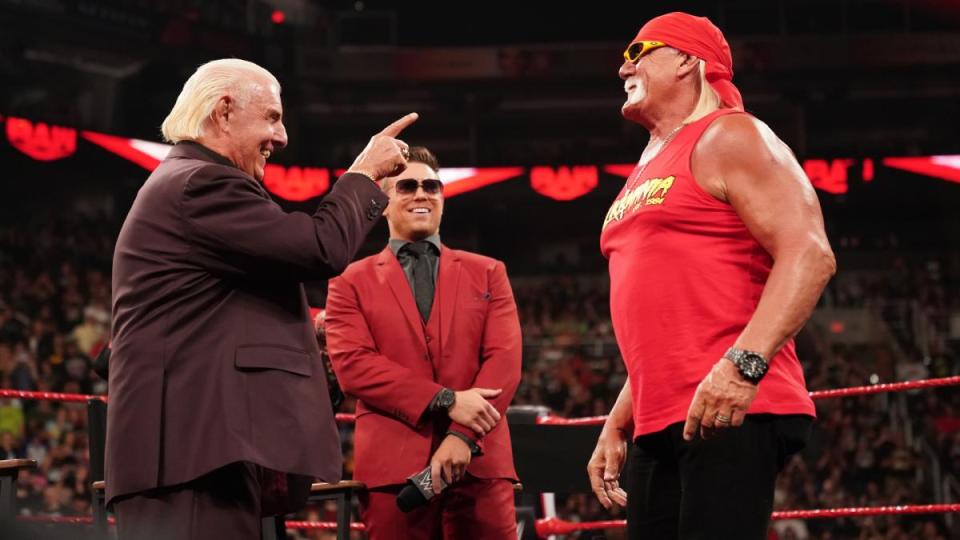 Unless you live under a rock you know about the fan confrontation between Hulk Hogan and a belligerent, drunk fan over the weekend. Hulk Hogan is a superstar among superstars. We all grew up with Hulkamania – it was perhaps the last, decisive cultural blow that nailed the coffin shut on the Cold War. Everyone wanted to follow in Hogan’s footsteps (no matter from what country or walk of life), from body-slamming Andre The Giant, to his atomic leg drops, to defying the odds, to ripping your shirt off, showcasing a chiseled physique (much like that which won bodybuilding shows). When you heard that Real American song come on, it was Hulk Hogan 24/7.

Fans go nuts for The Hulkster, but some act out in ways I’m sure they regret. Sadly, alcohol has a way of making even the best of us into complete jerks and that’s what apparently happened with a group of 40 something’s who decided they were going to interact with two pro wrestling legends, in Ric Flair and Hulk Hogan, over this past weekend. As I see it, this confrontation speaks to a bigger problem, as well. Fans don’t give stars adequate space, they don’t realize that stars have lives, and fans also don’t realize that stars (like all other human beings) have a breaking point.

Hulk Hogan’s fame peaked in the 1980’s and 90’s, with considerable fanfare in the 2000’s, and super stardom since. His main passion is without a doubt wrestling, but he’s been involved in so much more, including movies, music, and literature. He’s also been greatly involved in the fitness industry, from appearances at major festivals and expos to the business side of things, and interacting with bodybuilding press and media. His close friendship with Mel Chancey has also undoubtedly sparked even more interest in physique-based sports. Mel is one of the most connected and passionate ambassadors for the sport of bodybuilding there is. His work includes hosting programs, promoting events, and his roles with Core Medical and other respected companies over the years. That being said, I’m sorta glad Mel wasn’t present at this past weekend’s event, because like anyone who truly cares about Hogan, things may have taken a different course. Mel is very cool and collected, but again, this confrontation could have escalated and thank God it didn’t.

Here’s the deal, Hulk is a legitimate tower of power, but he wasn’t out looking for any sort of trouble; he was just getting a drink with a friend, who also happened to be a fellow superstar. From what I’ve read and from Hulk’s own accounts, they were simply trying to stay out of the public eye, have a quiet drink, and then get to the business of promoting an upcoming match. With that being said, these guys know all about being in the limelight – this wasn’t their first rodeo – after all; however, respectful fans keep a distance. True fans, especially the diehards, will be hard-pressed not to take their phones out or react in some way – that’s almost expected. They may want to play it off, play it down, and act like they’re not starstruck, but unless you’re in media or see stars on a daily basis, it’s just hard not to fight the urge to tell the world you saw one of your biggest heroes in person. I get it, but like I said, there’s a respectful way to do things and everyone at that bar, except for this one drunk guy, seemed to have behaved themselves accordingly.

Now perhaps the guy in question wasn’t even a fan, but for argument’s sake, let’s say that he was and let’s say that alcohol got the best of him. Fans need to realize that stars don’t owe them anything. There’s a very real, very unsettling sense of entitlement by a small slither of fans, who much like aggressive paparazzi, literally stalk celebrities. It gets to a point where people stop being rational and their obsessions border on the criminal. Some of these fans may not even know they’re guilty of this until they see someone they look up to and they just become lunatics. It’s not cool folks and quite frankly, it can easily freak celebrities and their families out – and with good reason. Other types of obsessive fans don’t scream, clap, and/or hyperventilate, rather, they get angry, belligerent, and downright hostile. When you throw drugs or chemicals into the mix, irrational fans can become a real problem.

The guy in question, along with his friends, approached a couple of celebs who were clearly trying to enjoy some downtime, away from the general public. Ric Flair, from Hogan’s account, wasn’t having it and tried to get rid of them. When these guys didn’t pick up on the obvious, things escalated, and Flair in kind made a funny comment. That could have been it, but the disgruntled fan sent Flair and Hogan a couple Shirley Temples. Unless the service staff was oblivious to the symbolism behind that, they should have ignored the request. Sending anyone a virgin cocktail means only one thing, especially to old school guys like Flair and Hogan. In any event, these guys are probably used to the local tough guys from back in the day and are less likely to snap than the average person.

Speaking of which, this reminds me of my interview with IFBB Pro Bodybuilder Mighty Mike Quinn. Back in the day, when all the magazines dubbed him “The Bad Boy of Bodybuilding,” he’d travel America (and the world), whether competing, guest posing, or making appearances, and there was always at least one guy who wanted to see if the tough guy rep was real. Maybe they were fans or maybe there were just jerks, but instead of meeting Quinn and being cool, they wanted to start shit.

With that being said, although celebs may be used to it, fans need to understand that celebrities are only human. All people, even the Dalai Lama and Mother Theresa types have a breaking point – rest assured of that. If anyone tells you otherwise, they’re full of it. Even Jesus lost it in the temple with the moneychangers (and with good reason).

So here you have this loud, drunk, belligerent guy mouthing off, sending virgin drinks, and if that weren’t enough feels compelled to have more words with Hogan, who’s walking with a crunch and by himself, as he’s leaving. Now don’t for a second think the Hulkster couldn’t have set the crunch against a wall and dealt with this guy, but beyond a verbal exchange, that was that. Thankfully that’s all it was, but the guy clearly wanted to get under Hogan’s skin and perhaps to a certain extent he did. The story was then picked up by mainstream news, tabloid news, and everyone took to social media. I don’t know if that was the guy’s intention, but that was the outcome.

I wanted to take this opportunity to write this article for Iron Magazine because I think it’s a good opportunity to speak to bodybuilding fans regarding etiquette and how to approach pro’s. For starters, pro bodybuilders and other fitness celebrities have down time, time with their friends and families, and quite frankly, fans should respect that. For those who feel absolutely compelled to make contact, there are appropriate ways to do so. Believe me, celebs see their fans way sooner than fans see their heroes, and they will often walk over to them, as they’re leaving, provided they have time, and provided they won’t get mobbed. If they don’t, fans SHOULD NOT take it personally.

Getting mobbed sounds may sound like a real hoot to everyday people, but to celebs it can be a downright nightmare. Do you ever notice why celebs at huge expos (like the Arnold and Olympia) tend to walk and talk? It’s because if they stay in any one place for more than a few seconds, the word they’re there spreads like wildfire, fans start arriving, and before you know it, the star is completely surrounded by at least several dozen layers of aggressive, excited, and clamoring fans. It’s not a good place to be and it’s next to impossible to breakout. So if a celeb talks to you, walk with them if they’re ok with that, but don’t try to delay them.

Ultimately, the star dictates the terms of any interaction. Fans are not in the driver’s seat – that’s where that sense of entitlement seems to rear its head. Just because there’s a crowd of fans, it’s not strength in numbers – you’re all there, because you want that celebrity’s time and attention – so be mindful of that. Also, don’t touch celebs (whether it’s putting your hand on their shoulder, hugging them, even insisting they shake your hand). Be mindful and respectful. If you want an autograph, don’t be pushy, same with photos. Also be reasonable. If celeb grants you a shot, don’t take five or six to pick the best, don’t then invite your friends in for follow-up shots, and by no means ask the celeb to pose any certain kind of way. Although you think the fans are the reason they’re rich and successful, I promise you, that them taking a photo with you (or not) won’t affect their starpower one bit. Be grateful they care, because many celebs have soured so much on interacting with fans and media, they just ignore everybody (and they’re still megastars!!).

In conclusion, I’m glad this confrontation didn’t escalate to anything more serious and Hulk Hogan deserves all the credit for that.