Newer PostWilliam Bonac Placed Higher, “All Alone”
Older PostYamamoto Pro Cup Will Be Bigger Than the Olympia?
Share on FacebookShare on TwitterShare on LinkedinShare on Pinterest

There was a ton of talk about the 2019 212 Olympia Showdown. The predominant discussions revolved around 7x champion James “Flex” Lewis leaving the division. Some believe he hung them up for good, embracing retirement, while others believe The Welsh Dragon will resurface in 2020 in the open division. Wherever he goes and whatever he does, Lewis was out for 2019. The other main discussion being had, was that Derek Lunsford was the heir apparent.

For many fans, Derek’s victory and eventual domination was basically a forgone conclusion. To many fans, him even showing up in Vegas was a formality – to them, Lunsford had the win in the bag. Another very big discussion being had online, in gyms, and throughout social media, dealt with The Persian Wolf, Hadi Choopan. For most, Choopan was considered a longshot because of his visa woes. You have to take into consideration that at the present time, the U.S. has better relations, even, with North Korea than Iran. The prospects for Choopan getting a visa in 2019, seemed bleak at best. Nonetheless, there was constant talk that if Choopan could get a visa, that he was the only man who could stop Derek. So there you have it, three topics dominating a division many have come to regard as one of the fastest growing, most exciting new additions to physique-based sports in the last 15 years. In reality, however, of the three, the topic that became the main, driving force, was that of crowning Lunsford as the face of the division, long before the 2019 contest. As a result of this ever-increasing pressure, I believe it created a great deal of stress on Lunsford, alienated many in the division, and showed the world just how gullible some in the industry’s mainstream media can be.

I think it’s very important to make the clarification that Lunsford never asked to be designated the heir apparent. I don’t feel he ever wanted that title and I know that many times he made a point to tell the media not to discount the efforts of his peers; however, after a point, we’re all human. I think that when the world is worshipping you, it becomes more and more difficult to push that love away. I do think Derek started to embrace this fanfare and it may have gone to his head. I have always liked Lunsford and thought he truly pushed Lewis in 2018. I don’t, personally, believe he defeated Lewis, nor do I think it was anywhere near as close as some of my fellow colleagues in the media world wrote. I think rivalries are great and I think everyone wishes for the days of another Coleman/Cutler or Heath/Greene rivalry, but when those type of battles aren’t really present, some wishful writers will create a suitable alternate reality. The truth is, Lunsford is still very young and has a world of potential, but he was defeated by Lewis and he was defeated by new 212 Olympia Showdown champion Kamal Elgargni. I don’t think Kamal’s physique is superior, necessarily, but I do think Lunsford was off for the prejudging, and so much so, that I had him 3rd. Now, understand something, Top 3 in a division as stacked as the 212 this year, is huge, but I do believe Shaun Clarida beat Derek and I have yet to find anyone from the press who disagrees with me. 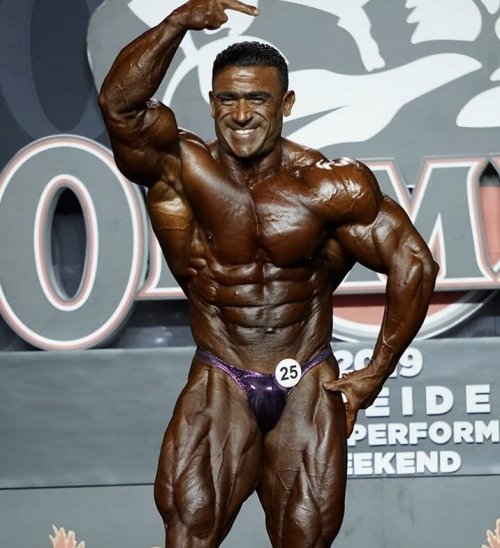 It’s hard to believe just how stacked the 212 was, given the media’s fascination with Lunsford. It looked like the obsession would shift when Choopan was announced as having been granted a visa, but that possibility was extinguished as soon as he decided on the Open. What’s crazy is that you had really big names in this contest, guys like Eduardo Correa making a comeback to the stage. This is the same Eduardo Correa who pushed Flex Lewis to the limit. Now, no disrespect to Derek, but Eduardo came much closer to toppling The Welsh Dragon than he did. Interestingly, Correa never enjoyed the same fanfare (even after proving himself) that Lunsford has. In fact, there was even public outcry that he had beaten Lewis, which we didn’t experience with Lunsford in 2018. Another big name that undeniably ignored was David Henry. David Henry dominated the 202 and 212 and was considered by many to have many of the physique qualities of Ronnie Coleman. Nonetheless, Henry was totally ignored. Shaun Clarida, considered one of the preeminent giant killers of the day, was in the house and looked ready for battle, but he was vastly overlooked as well. Ahmad Ashkanani, who was one of the most talked about bodybuilders in the 212 just 2yrs ago, had zero media interest. He’d go on to place Top 5, but even then, no media attention. Isn’t that crazy? Correa, Clarida, Henry & Ashkanani – all ignored!!

We often hear that social media totally redefined the game, how now everyone would be covered, but that’s hardly the case. On the one hand, I understand how the snowball effect works. I also understand that media, ultimately, gives what the people want, but I feel that in this case, the media was instrumental in creating much of the demand that was felt. I think some damage was done here and I think it’s patently obvious that key champions have felt alienated and overlooked. That’s not good.

When David Henry says in an interview that he hopes his competing at a show will remind the media that “he’s still here,” that to me says the media has failed the sport. We’re not perfect – we can and should improve our game. The one thing 2019 showed all of us, is that not only could a favorite lose, but that a guy totally under the radar could win!! It also showed the less informed and the newer fans that the judges don’t care about media hype, sponsors, or even how loud the crowd cheers. Judges are highly trained experts, who have an eye for muscle size, symmetry, and balance; they also look at posing, when ultimately deciding placings. They don’t score based on who looks the best on Instagram, who talks the biggest game, or who has the most flattering articles written about them.

On the one hand you have those who are talked about and then you have those who were talked about and are now, virtually ignored. The new 212 champ doesn’t fall into either of the aforementioned categories. This is a guy who was so off the radar, that he literally came to Vegas, walked in, and took the whole show. If that’s not a stark reality check, then I don’t know what is.

I have to say, that I think the media did, in fact, play it wrong with the 212 this year. I’m just as guilty as the next writer. Well, maybe a smidgen less, but guilty nonetheless. It’s not a competition. I’m here, simply stating, that we can do better. We shouldn’t have legends feeling like no one cares about them in the press. It’s our job to care!!