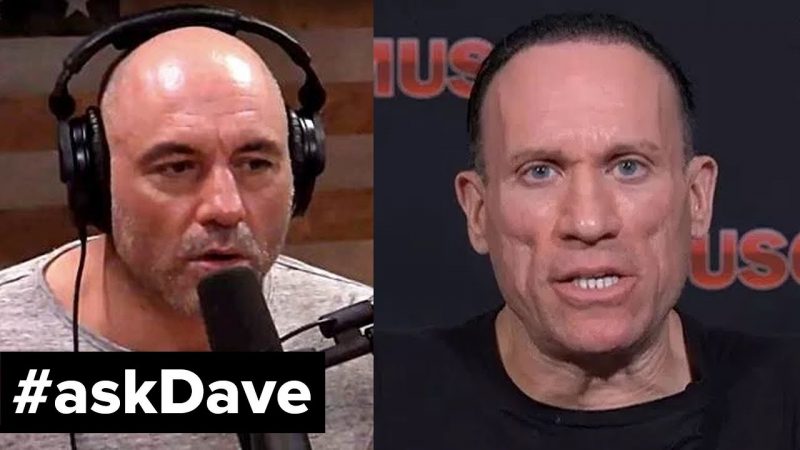 When I first saw the headline, I was really surprised, I was floored actually. I wasn’t surprised Dave would get an interview, because Dave knows a ton about nutrition, training, and supplements. When it comes to getting people contest ready, Palumbo is at the top of the list. No, I was surprised Joe Rogan would ask. I don’t dislike Rogan, I just don’t really get him. He’s obviously very talented, but he’s a podcaster, and I’m not big into podcasts (maybe 10-15yrs ago, but def not now).

I find them a little boring, even though I’ve been a guest on several, and I do enjoy talking shop with like-minded people. Then again, a lot of the topics Rogan discusses, are of zero interest to me. That being said, Joe is the top dog in a very vast pool of wannabes. When I clicked on the RXM video, I saw what you normally see on Rx, Dave in FL and Sid in NY, but no Joe Rogan. Surely, they’d tell the viewers where the episode with Joe and Dave was at, but nope. As the video played on, I figured they’d share an upcoming date for the interview (or even a prospective one), but again, sadly not. Although the headline read “Dave Palumbo on the Joe Rogan Podcast,” what it really meant was, Dave Palumbo would do the Joe Rogan Podcast, if Joe ever asked him. On the (RX) show, they said that if enough people asked Rogan, that Rogan would more than likely oblige. That’s an interesting approach, to say the least. Well, I’d like to lend my voice, to asking Mr. Rogan to bringing the man known as Jumbo Palumbo onto his show – it’d be a really big hit for you, sir.

Dave Palumbo is a warrior. He’s a real fighter. After cutting his teeth on the mean streets of Long Island, Dave made a name for himself as a top tier, national level bodybuilder. After leaving Muscular Development (where Dave was the Online Editor in Chief and a co-host of the sport’s second-ever podcast [co-hosted by John Romano and (initially) Gregg Valentino], he started RX Muscle and the rest is, as they say, history. Ten years later, RX Muscle is still considered by many, to be one of the Top 10 bodybuilding websites in the world. Palumbo’s story is one of hard work, self-sacrifice, and staying the course. Although Dave is a superstar, he remains humble in many regards, and that, too, is newsworthy. Whenever he goes to an expo, he’s mobbed!! People want to shake his hand, give him a high five, and/or even get his autograph. He’s one of the most upbeat, energetic people, preaching keto, that I’ve ever met.

Joe, you’d also have a ton to talk to Dave about. He could tell you about his reptile business, his training services, and about his run-ins throughout the sport. Ask him about visiting Kai’s old apartment building or the time he almost had the cops called on him by an angry cook at IHOP. Talk about close calls, you’ll be a the edge of your seat, Joe. You guys could also talk about current events, polyphenolics, and even fiber. Dave could bring a tub of his fiber supplement or comp you one; maybe you guys could discuss the evolution of your bowel movements. Best part Joe, is if you’re full of it, Dave can help.

But who would be the real winners, though? Clearly, it would be the bodybuilding world. Bodybuilders and fitness enthusiasts would be delighted to hear the knowledge shared. Joe, your history is in MMA, you could talk about the diet, training, and supplementation in that discipline, while Dave could speak as to that of the bodybuilding side. It would be eye-opening, exhilarating, and life-changing. Oh my God, just thinking about this epic episode is surreal. It’s like I’d never forget where I was when I heard it, kinda thing. I can tell you when and where I was when I saw East and West Berliners hammering off pieces of the Berlin Wall or when and where I was when the news broke of the Chilean copper miners being saved. It would be like that, but better! Who cares about some wall coming down or a bunch of miners being rescued, when Joe…., you could have Dave Palumbo on your podcast?!?!

Although I was bummed to have clicked on a link that didn’t give me what I wanted, it inspired me to lend my voice to that of dozens of others, all throughout the world, with one common, unifying factor, our support of Dave. I know that if we all got together, that at least one of us would get through Joe’s spam filters and then maybe, just maybe, his staffers will read our impassioned plea and mention it to Joe as he’s headed out the door or even on his way to take a leak. “Hey Joe, you want Dave Palumbo on your podcast?” And even though his likely reply would be “who’s that?” or even “Not now [insert name here], I gotta take a wicked shit.” Even though the reply might not be want we want (“Oh, Dave Palumbo of RX Muscle? Well, duh [insert name here], get that superstar booked!”), at least we’ll all have tried. So let’s get on it, BRETHREN!

I hope you enjoyed reading this article at Iron Magazine. Please be sure to use discount code “IML15” when shopping at IronMagLabs.com to Save 15% of your hard-earned cash, while getting some amazing products!!