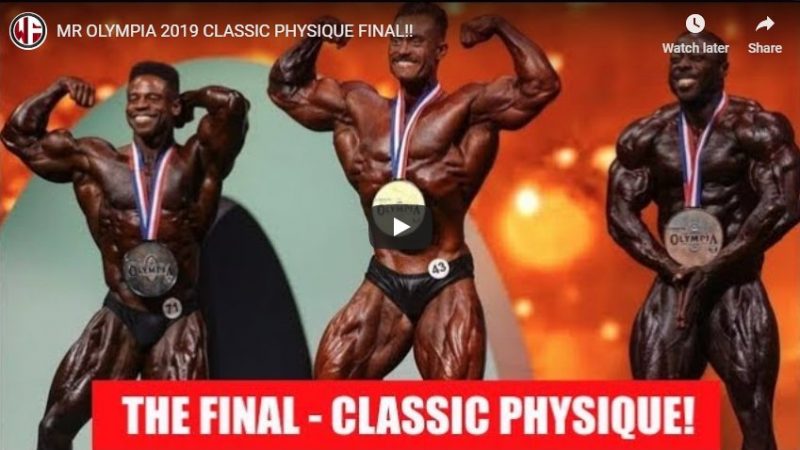 The Classic Physique Division has been the talk of the town since its inception just a few years ago. It’s the division that celebrates the artistic look bodybuilding was initially all about, that flowing, symmetrical physique, the tiny waist, broad shoulders, and complete balance. Classic competitors fall into poses like you or I would put one put in front of the other, they have a way of posing that seems natural, like second-nature.

Also, the poses they hit are poses that haven’t been seen in the bodybuilding world in 20-30 years, from complex floor poses to vacuum poses, to transitions that only a handful of bodybuilders can execute without seeming robotic. Whereas bodybuilding has time allotted for stage routines, in Classic, their whole time on stage is a posing routine. They walk differently, they stand differently, and they get a completely different reaction from the fans and the media than any other division. In many ways, especially as younger generations discover the iron game, more and more folks are wanting to sign up for Classic. Also, as the judging criteria has become a lot easier to understand, many more are giving the division a second look. This year’s Classic Physique Olympia will, without a doubt, have a huge effect on the popularity of the division as a whole, on both the pro and amateur levels. There’s no question there’s insane growth on the way!!

Just a couple weeks ago, we saw one of the fiercest battles of all time at the Olympia. It didn’t happen in Men’s Open Bodybuilding. It didn’t happen in the 212, either. .The battle took place on the Classic Physique stage. The Top 3 were locked in one of the most competitive, most intense battles of all time. The defending champion, Breon Ansley was flawless. I mean when you looked at his physique, his structure was perfect, he was perfectly dialed in, and he just nailed each and every pose. Chris Bumstead, who’s much taller than Breon, had filled out perfectly. That’s always a concern with taller guys and Chris isn’t just a little taller, he towers over Breon. Nonetheless, he was able to edge out the champ by a point. Can you imagine that? The champ comes in perfect, but the challenger is able to still win, because the challenger was just that good. And we of course can’t forget George Petersen, who rumor has it will be moving up to 212. George was also in fantastic shape, though he’s a different story, in that there’s guys in Classic who are on the denser, bigger end, and would be better fits in 212. There’s also guys on the smaller end, in terms of muscularity who’d be better off in MPD. These are key considerations, because while we can see people crossover at the local/regional amateur levels from MPD to CPD or BB to CPD, at the Pro level, the Classic look is distinct from the other two (or three, counting 212) divisions.

Speaking of distinctions, Classic is also a division that’s much more friendly to the natural athlete. We saw Keone Pearson reach top placings when natty and just recently we saw R.D. Caldwell Jr., win the first-ever IFBB Pro League Ben Weider Natural Pro. If you look at R.D.’s level of condition, separation, and the balance he nailed on contest day, then you see a lot of the qualities necessary to win at both the Arnold and Olympia levels. In many ways, Classic may seem like quite a mountain to climb, but it’s also more attainable than bodybuilding, looks more mainstream-friendly, and as a result, it’s far more marketable.

Speaking of marketing, I can’t stress how important that is. The remaining fitness magazines seem to favor the MPD and CPD looks over bodybuilding – hands down. This is the same for acting roles and mainstream gigs. While many will dwell on the large differences in prize money between open bodybuilding and all the other divisions, that’s just one of many ways to earn income in the fitness industry. The truth of the matter is, supplement companies are going after more classic looking athletes than ever before. Other segments of the industry are also going crazy for the two physique divisions, particularly clothing. The apparel side of the fitness industry has come a long way from string tanks and clown pants! There’s companies out now that have fused casual clothing with sportswear. There’s also companies putting out formal attire, like blazers, dress shirts and pants, and even tuxedos. These companies specialize in specific cuts and even custom made clothing. We’re talking fabrics from Italy, high-end suits, and high-end fashions. Those who model these pieces are paid very well. The bar keeps getting higher and higher, as do the price tags! And that’s just the tip of the proverbial iceberg. There’s also fitness shoe companies, designer watch makers, and soon cologne companies, deodorants, and even aftershave products will all be lining up. That’s why even if the prize money isn’t there, the money from endorsements, sponsorships, and appearances will more than make up for it. Not all divisions have equal marketing potential. Classic is most definitely one to watch.

Most younger and newer competitors will more than likely go for Classic Physique than bodybuilding, and eventually, maybe even more so than Men’s Physique. Classic has one foot in both men’s divisions and walks away being the clear cut best of the three. It’s a great time to be getting into physique-based sports.