Cheat This, Not That: Hypocrisy, Ethics and Performance Enhancement 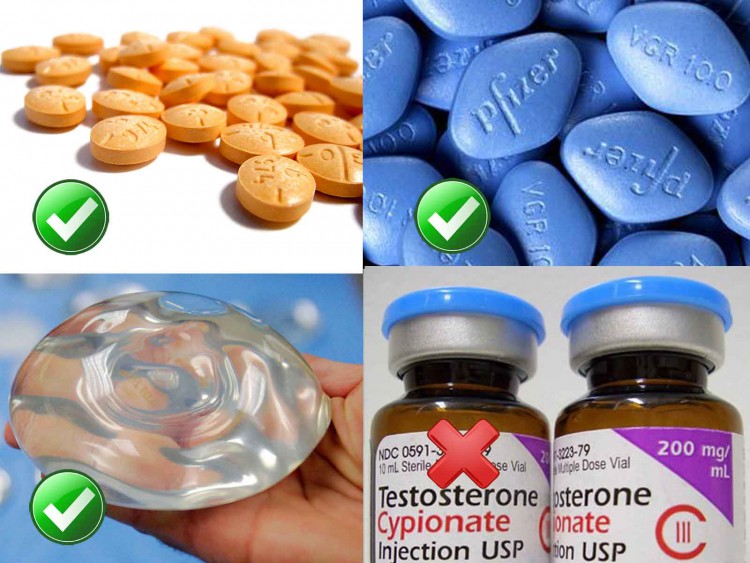 Anabolic steroids demonized while Viagra, Adderall and breast implants gain societal acceptance. Those of us who have spent our careers studying substance use (note we do not assume that all use is disordered) and/or working with, in various capacities, those who engage in non-medical use of androgenic/anabolic steroids (AAS) have long ceased being surprised at the degree of bias in both the media and scientific communities against AAS and users of AAS.

The agenda pressed by many in both venues has had the direct effect, whether purposeful or not, of casting those who use AAS in a negative light. Hence, the general message to the public is that such users are narcissists with an “Adonis Complex” and muscle dysmorphia (in fact, so are all bodybuilders and anyone who cares about their physique); that they are addicts who are dependent on AAS and exhibit a wide range of psychopathology; that they have cognitive deficits; and/or that they may explode at any moment into murderous fits of rage. Above all, perhaps, AAS users are “cheaters” who use drugs to defy the limitations that nature has imposed. Unfathomable!

But wait! How do we square this level of targeted indignation and hypocrisy with the fact that America has become a nation of “performance enhancers”? When it comes to academic/intellectual performance, the idea of playing the hand one was dealt has given way to the use of stimulant drugs to enhance cognitive performance as a means to academic success – to be all you can be. This is no longer only to ameliorate deficits, but to take anyone at any level and seemingly increase performance. We cannot get through an hour of television without seeing a commercial that tells men that they need not live with the natural decline in erectile function that our fathers endured, that it “may be an issue of blood flow” and there’s a drug for “when the time is right” (which seems to have something to do with being in the bath tub on a hill or seashore). The “lifestyle lift” tells women that they no longer need to be subject to the age-related decline in skin firmness, but can recapture the illusion of youth under the skilled ministrations of a surgeon. Looking one’s natural age need no longer be endured. Liposuction and other body sculpting techniques can re-contour hips and abs. Implants that can reshape and enlarge calves, pectorals, buttocks, and breasts are now accepted means to overcoming natural limitations. Prescription stimulants that can improve focus and concentration are being sought by parents and students and prescribed by physicians with increasing latitude. In deed, we are an enhancement culture; counter-intuitively, given the bias against AAS, even the father of all AAS – testosterone – is hawked on television in a form we can rub on our skin or dab under our arms so we need no longer suffer the hormonal decline that occurs naturally with age. Breast enhancement, sexual enhancement, cognitive enhancement are all about the American Dream of bigger boobs, better boners and brighter brains; bigger, better bodies, however, are simply not on the American agenda. Clearly some goals and methods for being all we can be are more accepted than others.

A recent study (1) compared how individuals judge others who use performance-enhancing drugs in two different domains—the athletic domain and the academic domain. The researchers noted the similarities between the misuse of prescription stimulants and the misuse of AAS – in both cases, a drug with legitimate medical uses is being misused to gain a competitive advantage. However, the researchers hypothesized that an athlete who takes a performance enhancer and succeeds will be judged as more of a cheater than a student who uses a performance enhancer and succeeds. They also hypothesized that the use of a performance enhancer by an athlete will be viewed as more necessary for successful performance than a performance enhancer used by a student. Approximately 1,200 male college freshmen were recruited to complete a questionnaire that included two scenarios. One scenario described an athlete who misused AAS to help him succeed at a championship race, while the other described a college student who misused Adderall to help him succeed on his midterm exams. As expected, results showed participants believed the athlete was more of a cheater than the student. However, contrary to the hypothesis, the participants felt Adderall for students was more necessary than AAS for athletes in bringing about success. So for AAS users, the news is all bad: AAS users are viewed both as bigger cheaters and as having less necessity/justification for using the drugs.

The study supports our observation that those who use substances to enhance physical performance are viewed more negatively than those who use drugs to enhance cognitive performance. If we look for the causes of this bias, why it is that Americans see those who use physique-enhancing drugs as a different case – as cheating, narcissistic pariahs – we need look no further than the bias in science and the tag-along media. Those who keep up with the scientific literature have seen an increase in articles that assume pathology among AAS users. Some researchers seem to come out with a new study every month highlighting another reason to be afraid, be very afraid, of AAS and their users. After all, what is it with these people who want to be bigger and leaner, who flex and shave their bodies? Who are these big, scary, hairless people? Our own research into the characteristics of AAS users found something quite startling – at least to those who consider such users an alien form of life. That is, they are just regular people, looking to better themselves.

Researchers studying human behavior, especially in cases which have political and moral (and funding) implications, often approach such questions with certain assumptions. As humans studying humans this is not always avoidable and does take a level of objectivity that is sometimes difficult. For instance, when it comes to AAS many researchers begin by assuming that any and all use is abuse, or they poorly, if ever, differentiate between use, misuse and abuse. They then interpret all findings in light of those assumptions. Case in point: a small percentage of individuals using AAS may exhibit some increase in hypomanic behavior; a similar small percentage may show increases in aggression as measured by laboratory analog tests (even though it is generally found that observers report no such increases). The interpretation of this finding in the literature has now consistently become “AAS cause aggression.” In service of the science of human behavior we have to stop to ask, what of the other 99% of users who aren’t affected? Why not them? Apparently they are not important when one is seeking problems and finds what they are looking for.

It is also clear that this bias in the public’s view – a public that rarely if ever reads the scientific literature – reflects the media’s slanted presentation of information on the use of drugs to improve physique or physical performance. Interestingly, although we are at a point where attitudes toward marijuana use and users have become more moderate and recreational use has begun to gain legal acceptance in some areas, AAS continue to occupy a special place of evil in the public mind. Perhaps this partially reflects the fact that marijuana use is sufficiently ubiquitous that most either know users or have used themselves, while AAS use is, in the general population, so rare that most people have never, to their knowledge, met an AAS user. When it comes to marijuana, the public has learned to smell bullshit when it is in their back yard, so to speak, and can therefore tell when scientists with an agenda are misleading them. But in the case of AAS, their sole source of information is often media reports that abstract sensational quotes from the research or highlight or invent anecdotal reports from rare and, quite frankly, incredible cases. Hence, many people who know the name Chris Benoit and the tragedy of his making will also associate only steroids with him – few will have heard of other more likely causes of his behavior, such as chronic traumatic encephalopathy.

Those of us who have long studied drug use and the history of our country’s relationship with drug use immediately see a parallel between this approach and the pyramid of prejudice created regarding marijuana in the late 1930s; scientists look to find presumed negative outcomes and use their findings to further substantiate their biases; other researchers cite these findings as fact and build on them, feeding back confirming and biased results to the literature; popular media uses these and expands on them by focusing on the most irresponsible and sensational exemplars (2) of the class of individuals, by creating distorted images and presenting them as if they are the norm, as if they were reality, and capitalizing on the relative ignorance of readers with regard to the basic facts. Soon such articles, scientific and popular, are cited by others and the cycle continues. Sadly, this “beefer madness” – a bizarre doppelganger of reefer madness – has a number of negative effects, perhaps most notably the fact that AAS users have come to distrust both the media and medicine and may, therefore, be less inclined to receive the preventive care necessary to avoid harm. Frankly, we hope that decades hence this pyramid of prejudice will be subject to the same level of ridicule with which we now view those bygone days of marijuana hysteria.