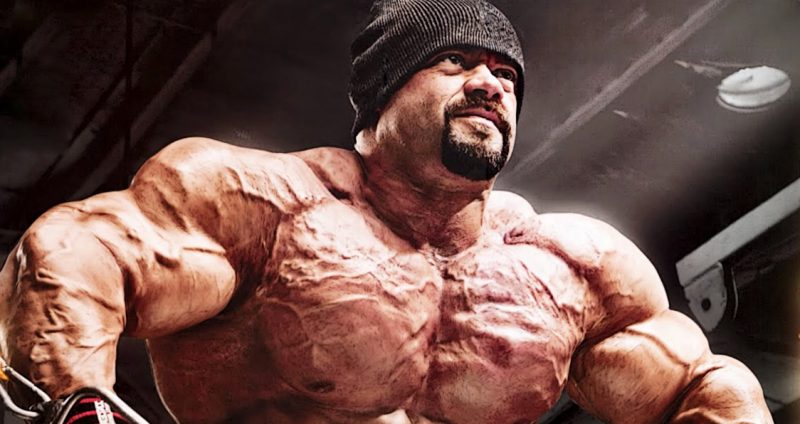 No one trains like Branch Warren, today. Very few could hang with him in his heyday, besides his longtime training partner Johnny Jackson (the world’s strongest bodybuilder) and of course the G.O.A.T., 8x Mr. Olympia Ronnie Coleman. Branch, like 6x Mr. O Dorian Yates, always brought a grainy level of condition, with slabs of dense muscle mass, and veins for days.

Warren, like few of his day and even fewer today, gave the people what they wanted. Much like the iconic film, Pumping Iron, Branch and J.O.J. gave their fans something more. At a time when many bodybuilders were stoic, low key, and covered from head to toe in baggy sweats, these two showed their gains, trained with huge chains, and even rusty, ancient looking equipment. Like Coleman, they trained at the original Metroflex – the one without air conditioning – under the hot Texas sun. They didn’t grab a wheatgrass shot at the gym’s juice bar – that’s not the kind of place that was. And where they trained and how they trained, is a big part of why the fans flocked to these guys, followed them, and took their recommendations very seriously. After all, credibility is key in the fitness industry. If you sign a sellout, they could preach the virtues of a supp line till the cows come home – but no one takes them seriously. Their name isn’t respected and their testimonials, even less so. On the other hand, you take a man’s man like Branch and whatever he said, might as well have been carved in stone. He pushed Muscletech zealously, really helping them make it into one of the most respected names in the business. The demand for their products soared! That’s just one example of Warren’s undeniable starpower. In this article, I’d like to talk about Branch’s approach, the impact he made on the sport, and how he continues to inspire countless fans and aspiring competitors.

After many years of winning the Most Muscular award at the Arnold and being a fixture in the Top 10 of the biggest contests in the world, it became crystal clear that Warren was a superstar. His rise took time, from his first contests in the early 1990’s as a teen, to winning the heavies at the 2001 NPC Nationals, to his first pro win just four years later. I always knew Warren was a tough, seasoned competitor, but nothing could prepare me for his amazing placing at the 2009 Mr. Olympia. When that happened, he smashed his way into a battle between two legends. He was so good, he got right in between them. And in the end, when the smoke cleared, Jay regained his title, Branch took runner-up, and Dexter took a very strong, very surprising 3rd.

Word of Warren’s amazing placing was headline news for months to come. Not only was Branch not the most aesthetically pleasing bodybuilder, neither was Jay, but they both edged out the more symmetrical, more balanced, reigning champion, Dexter Jackson. As Bob Cicherillo has said countless times over the years, the Olympia can be summed up as being an “apples and oranges” competition. Mass, freaky condition, and insane density, bested symmetry and flow in 2009. From that point on, in just a couple of years, Warren would win not one, but two Arnold Classic titles. But what was very cool about his rise to superstardom, was that he didn’t change a thing about who he was. Branch didn’t change his outlook on the sport, he didn’t tone down his over-the-top methods to training, and he continued to narrow the gap between the stars and the fans. Branch Warren truly was a blue collar bodybuilder – a star who never saw himself above his fans.

Warren’s impact on the sport is undeniable. Most bodybuilders come to a very stark realization early on their journey. There are those blessed with great genetics and there are those who have to give genetics the bird, build a winning physique the hard way, and fight for every last placing and title. The finished product may never look like that of Frank Zane, Bob Paris, or Flex Wheeler, but if the muscle is freaky enough and the athlete has enough self-confidence and drive, absolutely nothing will stand in their way. Nothing stood in Branch’s and nothing necessarily has to stand in yours. That’s the take home message. Although he didn’t win the O, a runner-up spot ain’t too bad, not to mention winning the most iconic bodybuilder of all times’ contest – twice – and doing so consecutively.

The Texas Rattlesnake has also made a strong impact when it comes to the resilience of a committed athlete. Even after the heyday of the MuscleTech years faded, he was always at the center of all the action. He always had great sponsors, received tons of great press, and was always seen as being on the ball. That’s in part because of his reputation, his physique, but also his work ethic. Today, in addition to his name as a champion bodybuilder, sponsored athlete, and recognized force in training videos, Branch is also a highly-respected contest promoter, who knows exactly what the competitors want, what the vendors want, and want the fans want. This is why he’s such a unique promoter and why he will continue to be mega successful.

When you look at what Branch is all about, it’s a real story about overcoming the odds, from creating a great physique, to being an international superstar, and to always staying true to your roots. These are values that are useful to athletes in all walks of life. Branch’s star will continue to rise, count on it!

I hope you enjoyed reading this article, here, at Iron Magazine. Also, be sure to use discount code IML 15 when shopping at ronMag Labs I to Save 15% Off your purchase.