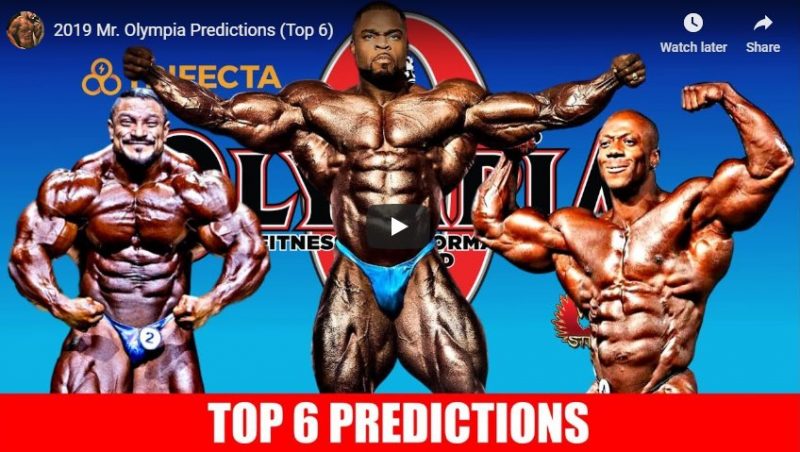 I’ve often claimed the two greatest Mr. Olympia contests in history were the 1998 and 2009 renditions. 2009 due to the number of competitors who had a realistic chance of winning the show, and 1998 because the long running champ had retired. We would undoubtedly see a new Mr. Olympia after six years of Dorian dominance. The latter situation is a rare one. Lucky for us, not so lucky for others, this elusive champ-not-in-the-show situation is once again right around the corner.

This year will see a whole new dynamic in regards to the new champ guarantee. Not only will Mr. Olympia Shawn Rhoden not be there, Phil Heath and Big Ramy will also be absent, both of whom are obvious threats to the title. The 2019 Mr. Olympia is as wide open as any of its kind throughout history.

The outlandish action figure of a man Brandon Curry seems to be the frontrunner in the minds of most. After winning the Arnold Classic this year, there really isn’t anyone in the show who is ranked above him, with the possible exception of Dexter Jackson. That said, Brandon is not without flaws. As of his last showing his legs still didn’t match his upper body and he was better from the front than he was the back. Since he began training with the Camel Crew at Oxygen Gym, he’s managed to consistently nail his condition, which was a major issue for him in the past. Since heading to Kuwait, Brandon has made unbelievable improvements from year to year and even show to show. Based on these unparalleled improvements, one can see why people are expecting these minor flaws to be vanquished come Olympia time. Can Brandon be defeated at his best? The chances are slim to none.

William Bonac has to be considered second in line behind Brandon based on his recent showings. The Conqueror has been as high as third at the Olympia, and some say he should have been second. William has assumed the role of a modern day Lee Priest as a short competitor who is still capable of butting heads with the best of the best despite his height. From the standpoint of overall balance, William is the best in the show. His only weakness is his height, plain and simple. Unfortunately William has dealt with some fairly serious coach drama over the last few weeks, which could very well wreak havoc on his Olympia preparations. Assuming this drama does not affect William’s physique and Brandon is not a cartoon character, William can easily win bodybuilding’s greatest title.

Roelly Winklaar is this shows dark horse. This guy is capable of not only winning, but obliterating the lineup. He has more muscle per square inch than any man alive. Winklaar has the greatest triceps in human history and arguably the best arms in history. He is the biggest freak in the IFBB, which is saying a lot, as every IFBB open professional bodybuilder is a certified mutant. The Dutch Beast has one glaring flaw: consistency. We never know which Roelly is going to show up. Soft Reolly, peeled Reolly, tight waist Reolly, bloated midsection Reolly. He really is all over the map. If The Beast can dial in all of that otherworldly muscle, he can be a living, breathing, nightmare for the rest of these guys.

I guess it’s time to discuss the one and only vampire in the lineup, Dexter Jackson. Apparently human blood is the secret to longevity in this sport because The Blade’s longevity is second to none. Dexter will be two months shy of fifty years old when the Olympia rolls around and he is a legitimate threat to the throne. In a sport which gaining muscle and losing fat is of utmost importance, this should not be impossible. Nonetheless there’s Dexter taking out young up and comer Luke Sandoe at the Tampa Pro several weeks ago, successfully putting himself into discussions like this one as a top contender for Olympia gold. Dexter winning his second Mr. Olympia title and snagging his 30th career victory in the process at forty-nine years old is the best possible story going into this years show and could prove to be the greatest story in bodybuilding history.

The Olympia debut of Luke Sandoe is an exciting one. Of the many stellar British pros rising through the ranks at the moment, Luke is the easiest to get excited about. The Juggernaut possesses a massive, gnarly, throwback physique reminiscent of Dorian Yates. Need I say more? Luke has been putting out a nearly constant stream of high quality video content as of late, which makes it a piece of piss to root for him. His hardcore, no bullshit, genuine persona is overwhemingly refreashing in an era of fake do-nothing fitness models who are miraculously garnering all of the attention and money. If you’d like to learn how to become a great bodybuilder, follow and emulate Luke Sandoe.

As far as predictions are concerned, these competitors were not discussed in a random order. The living, walking action figure known as Brandon Curry will be too much for this partially gutted lineup. The battle for fifth and sixth will be a ruthless one. I would selfishly prefer Luke to land in fifth, simply because I feel he is good for the sport. Nathan de Asha, Steve Kuclo, and Jon Delarosa will be in the fight for sixth. Steve and Jon will both be content with eighth and ecstatic about sixth, not so with Nathan. Rather, Nathan will be devastated by eighth and content with sixth, although this partially depends on who finishes fifth, as Nathan and Luke share a fairly strong British rivalry. I fear that Nathan will appear small next to the other guys at the Olympia and place sixth or seventh. I am wholeheartedly pulling for Jon Delarosa to land in sixth. While my motives are selfish and based on the fact that Jon and I have experienced very similar struggles over the last year or two, no one in the industry will deny that Jon is a great man and deserving of a high placing at the big dance.

If I’m honest, this year’s Olympia is slightly less exciting with Phil, Shawn, and Ramy on the sidelines. Although as stated earlier, this situation is a rare one and if Pokemon taught us anything as kids, sometimes rare is better than exciting. In this case a rare situation will beget an extremely exciting one in the future. Assuming Brandon or William does become Mr. Olympia this year, the 2020 rendition will be one for the ages with three Mr. Olympias all close to their prime, battling it out on the same stage. It is important to see the forest through the trees in regards to this years show, as it could very well be setting up the greatest Olympia in bodybuilding history.