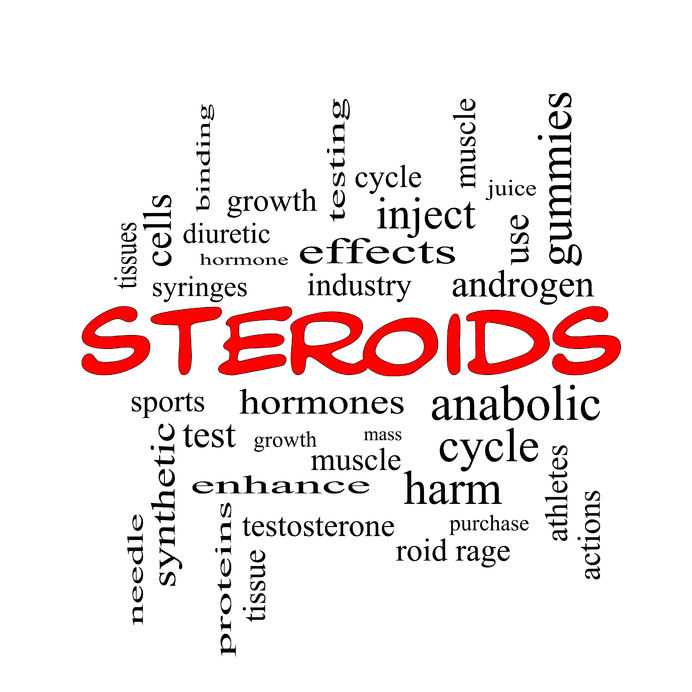 Unlike traditional street drugs, or narcotics, anabolic steroid sales adapted quickly to the advent of online marketplaces, stretching back to the late ’90s when they first became available for sale online. Since then, and in contrast to street drugs, the primary method for purchasing anabolic steroids and other performance enhancing drugs, is the Internet.

Open source boards, once the black sheep of the online steroid world, and often considered “bad for the community,” have since become the norm. While mainstream discussion venues like Facebook and Reddit have been known to shut down steroid source talk (most notably last month, when the subreddit of that name was closed), freestanding steroid websites almost universally allow some degree of steroid source advertising and source discussion. Naturally, research and discussion of anabolic steroids is often conducted in close proximity to purchases. In the ’80s this may have entailed asking the biggest guy in the gym what he was on (then asking where he gets it), in the current day it involves the Internet.

Therefore, a recent study on anabolic steroid research aimed to discover exactly what people searched for, when they searched for anabolic steroids online. As the majority of Internet search traffic (87.5%) is conducted utilizing Google (over 3.5 billion daily searches), the company’s own internal data stream analyzer (Google Trends) was relied upon by the scientists conducting research for this study. Also relied upon were previous studies into what anabolic steroids were available for purchase online and user surveys of the most commonly used compounds. Here’s a look at what they discovered: 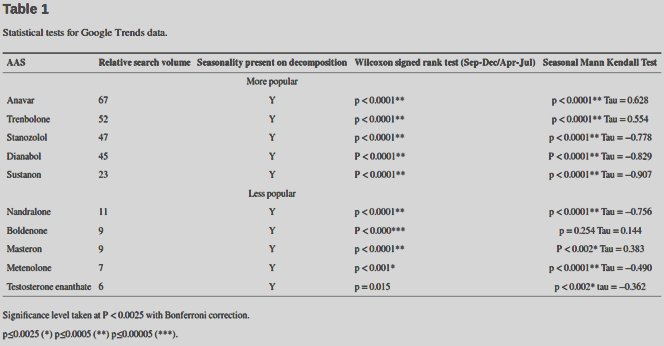 Unsurprisingly, an increase in search volume was seen in spring and summer, from the months of April to July, most likely corresponding with an interest in attaining a beach body (in the spring) and maintaining it (throughout the summer). 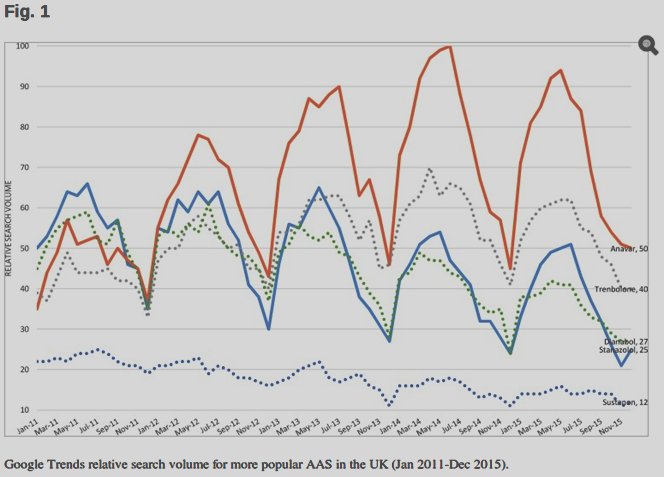 Primobolan (aka methenolone or metenolone), oddly, is absent from the top searched (and utilized) anabolic steroids. This may be due to cost (it’s the single most expensive injectable anabolic steroid), the high percentage of counterfeits on the market, or that it’s relatively weak compared to many others. Whatever the case, this is unfortunate because it also boasts one of (if not the) best safety profile. Trenbolone, perhaps one of the harshest anabolic steroids in terms of side effects, rates as one of the most researched (and used), and this is almost certainly not because of cost (it’s relatively expensive) but rather because it produces noticeable and rapid gains in both muscle and strength. It can also be acquired without a prescription and inexpensively home-brewed using cattle implants. Anavar was also very prominent in searches and use, most likely because it imparts fairly rapid cosmetic changes (lean muscle accrual without fat gain), despite being expensive. It’s also considered by many to be a low side effect anabolic steroid with the added benefit of being oral (for those who are needle-phobic). Finally, and again to little surprise, Dianabol was very popular – it’s likely the cheapest oral steroid on the market, although gains aren’t particularly solid (water retention and fat gain are often issues) and side effects can be significant.

Finally, there are some glaring errors with this work that require explanation. The first is that Nandrolone (a very popular injectable anabolic steroid) and Stanozolol (another popular steroid available in both oral and injectable form) are claimed to be less popular search trends. However, both are misspelled in the article. The first “O” in each word is erroneously spelled with an “A.” If this is simply an error in the paper that didn’t originate in the actual Google search, then it’s just a typo. If it’s actually how the researchers spelled the words during their searches, then we have a problem and the data on both of those steroids should be disregarded.