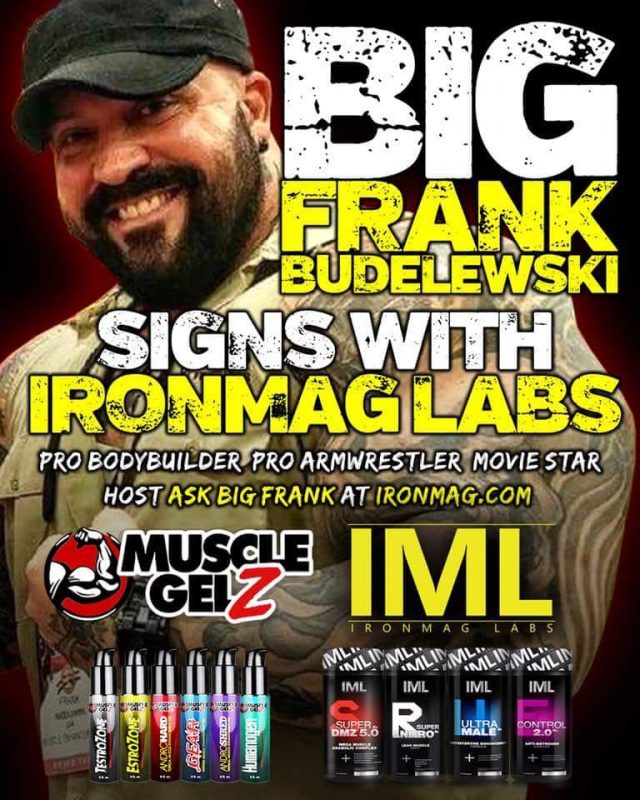 Not all athletes are created equal. In theory, we all have the ability to defy the odds and do things that separate us from the pack, but life also deals some of us bad hands. In many cases, adversity sidelines many, and it all but destroys plenty of lives in the process. Some hurdles are easily overcome through some positive thinking and hard work; however, when a medical professional is telling you that you’ll never walk again, that you’ll live a life on meds, and that the last thing you should do is train, then that’s enough for most to put to rest any and all desires to compete, go pro, and do anything that requires even the most minimal physical effort.

Frank Budelewski (aka “BIG FRANK”) is the type of person who defied the odds, refused to listen to the talk of (negative) medical professionals, and who instead, created his own alternative narrative, who persevered, listened to his body, and gradually inched closer and closer to the life he wanted to live, to the physique he wanted to attain, and to present the very kind of personality sorely missed in today’s fitness industry. When a great man, in Rich Piana, discovered Frank, he knew what he was getting. He liked that Frank helped others, visited hospitals, and was less consumed with himself & more so about those who society has turned its back on. Big Frank is kind, compassionate, and humble, but he’ll just as easily turn tough as nails if it means protecting the downtrodden, neglected, and bullied. In more ways than one, BIG FRANK is like a modern day superhero in a fitness industry consumed with feuds, pettiness, and selfishness.

When IronMag Labs changed its marketing approach, we initially opted against signing athletes. Our goal was to be a media house, creating, releasing, and promoting our own video programs and articles; however, IML is a company that believes in constant innovation. We will never settle in, rest on our laurels, and/or refuse to change. Change is necessary – if and when – warranted.

Signing Big Frank to Team IML was a no brainer. Earlier in the year, I offered Big Frank an opportunity to make videos for IronMag TV (our video network). The series was off to a great start and when 5% decided to cut many of its athletes, the first question that came to my mind was whether Frank was one of the people let go. From then, it was a race to get the man to sign on the dotted line – we had to have him as part of the family.

The Arnold Classic is what sealed the deal for me & the rest of the company. We had all set our sights on Columbus since about December, but it wasn’t until the last couple of weeks that having Big Frank join us at the Muscle Gelz booth became a plausible option. The addition complemented our efforts spearheaded with Gregg Valentino at the helm. Having two superstars on that level, ensured that we’d have a ton of traffic, but it was so much more than that.

Gregg is an undeniable people’s champion, someone known for his realness, his true love of the sport, and the fact he’s been involved in the fitness industry since the days of the Golden Era. Big Frank, on the other hand, has history, but more and more people are just now getting to know him. That’s a great thing! He’s most definitely on the ascent, with no end in sight!!

Although Big Frank was only with us for a couple of days at the Arnold, his fans made themselves known from the get go. As soon as we started releasing graphics announcing his appearance, there was an undeniable outpouring of support. This is because Frank has tapped into several different fanbases. Whereas some bodybuilders have gone as far as they possibly can with the sport, those who really see the bigger picture, are keen to the fact that in order to be truly successful, it’s all about cross-promotion. It’s key to do all the things that you love and strive to do them all at the highest possible quality. 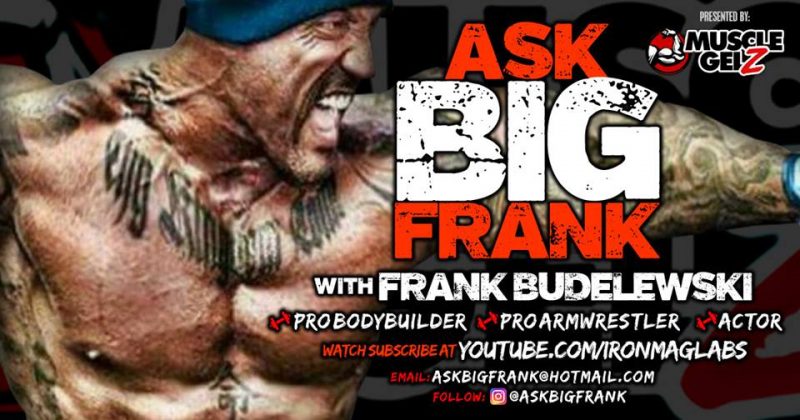 Big Frank is a pro bodybuilder, a pro armwrestler, and an accomplished movie star, appearing in major motion films that will appear in movie theaters and go to DVD. Frank is also the product of an impressive transformation and overcoming surgeries, pain, and physical hurdles each and every day. His whole life is an inspiration.

At the Arnold, there was a VIP guest who literally waited almost two hours for Frank. He stood faithfully by the booth, clutching a photo. It was almost like he was a palace guard or something. His resolve was ironclad; he was a man on a mission. Only later, did we find out, that like Frank, this gentleman had successfully completed a jaw-dropping transformation. He saved his own life, changed the way he lived, and a great part of that inspiration was because of the example set by Big Frank. The gentleman traveled to Columbus, in large part, to say thank you.

Seeing people from all over the country come to the booth was very powerful. Even people from 5% couldn’t stay away and it’s rumored they tried to get Frank back. Other companies raced to court him, but we were the first – and loyalty is very important to the big man! That’s another virtue lost on many in today’s fitness industry. On the competitive side, we’re blessed to have the outstanding leadership & example set by the NPC and IFBB Pro League, but when it comes to navigating through the waters of sports supplement companies and personalities, endorsed athletes, and the media, that’s a far cry from the level of professionalism of the aforementioned federations. When you’re at expos, there’s all sorts, but Frank is most definitely one of the good guys!

Personal attributes and his good heart aside, Big Frank also presents a physique unlike any. When I first met him, in 2017, he was with Rich Piana. It takes a certain kind of individual to sign someone who’s physically bigger and, arguably, stronger than you – especially if you’re the main attraction. Rich Piana was the epitome of secure in a world racked by fragile egos, narcissists, and ridiculous people going out of their way to hide their many insecurities. Rich didn’t only discover Frank, he wanted the world to get to know him. That’s the kind of guy Rich Piana was and there will never be another one; however, Frank is a lot like him. Between Frank & Chanel, there’s a part of Rich that will live on! No one can kill that attitude, no can fake it, and no one can acquire it – it’s just there or it’s not. At 6’4, 370lbs of muscle no one’s going to miss this muscle giant!! He dwarfs even the “mass monsters” of the day, making them look like Boy Scouts. His arms outsize most guys’ legs and his functional strength is through the roof, even stunning WAL Champion Devon Larratt on the table.

Bodybuilders look strong, but generally aren’t. Powerlifters, generally, look like Norm Peterson from Cheers, but are very strong. Powerbuilders are strong and ripped, championed by the likes of Mike O’Hearn. Big Frank is huge, strong, and ripped, BUT is bigger than a house. He doesn’t fit into any particular window; he’s doing his own thing and that’s another reason he’s an IronMag Labs sponsored athlete!

When you think of a fitness industry rockstar, an image of Big Frank should come to mind. If it doesn’t now, don’t worry, it will. That’s my job! We’ll be making a series of appearances around the country, so be sure to come over and say hello. Don’t worry, Big Frank won’t charge you $25 for a photo, he won’t charge you $50 to be your friend, and he won’t look at his watch every other second you talk to him. He’ll look like he cares about you – because he does! We’re real people on this team – from Rob, Preston, yours truly, Gregg, Goon, The Real Chris Brah & Big Frank! We’re always looking to grow the family – provided you’re as real as we are. If you’re a poser, bandwagon person, or a troll, please head for the door. Life is good at the present time and things are only going to get better & better! 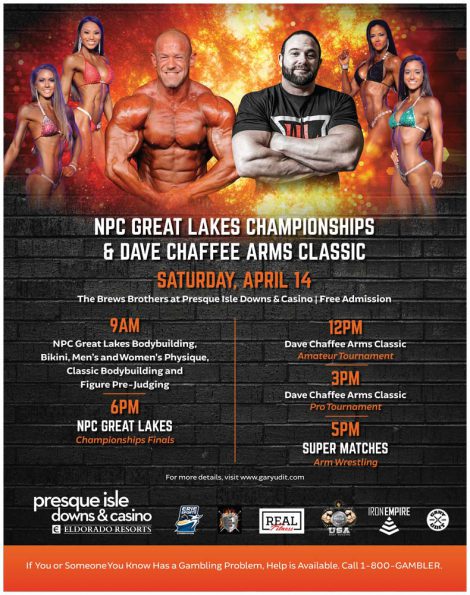 We all had a huge blast at the Arnold Classic and hope to see y’all in the very near future. Big Frank’s next appearance will be April 14th, in Eerie, PA, for DAVE CHAFFEE’S ARMS CLASSIC. Make sure to get out to the event so you can meet the big man, get a photo with him, and talk shop. We will also be filming an episode of Ask Big Frank, with special guests, so you won’t want to miss that.

If you’d like to check out our great products, log onto IronMagLabs.com and remember, when shopping, use discount code BigFrank15 and save 15% off your purchase. There’s NO QUESTION that building & maintaining muscle is heavily due to what you EAT and how you TRAIN, but great SUPPLEMENTS most definitely play a role. In the end, it’s not so much about looking at the AFTER PICTURE and racing towards it, it’s more about looking at the smaller pieces, seeing how they all fit in together, and working with a sensible, rational game plan. Otherwise, all you’re doing, is setting yourself up for failure.