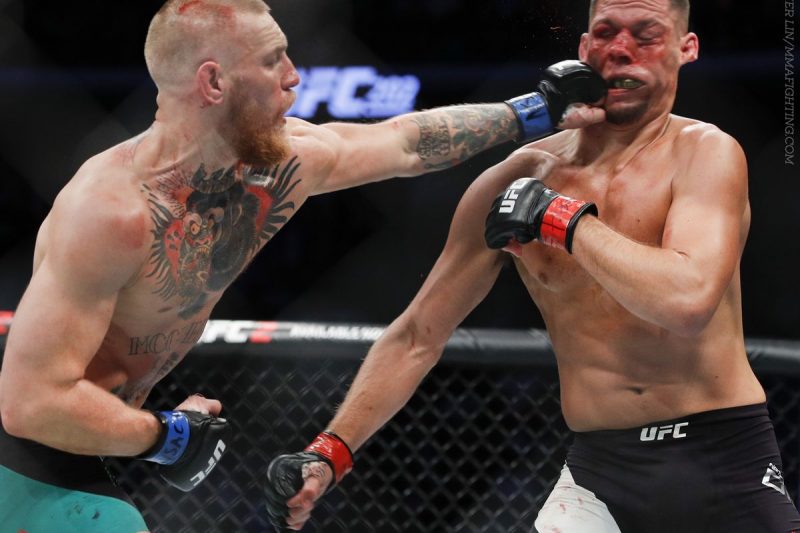 The overall popularity of bodybuilding, along with its lack of mainstream appeal, has been debated relentlessly over the last several decades. There are many common explanations for why bodybuilding has avoided mainstream popularity, ranging from steroid use to the sport being unattainable for the general public. As if any professional sport is attainable for the general public. Reasons given for why the sport should be more popular tend to be slightly less potent, such as bringing up the point that nearly everyone works out these days or that nearly all other professional sports use workouts which originate from bodybuilding. One tactic that is rarely implemented in regards to making a case for the popularity of our sport, is comparing it to another sport which possesses all the same popularity downfalls, yet became hugely popular nonetheless. In this case, that other sport is mixed martial arts.

Similarities between MMA and bodybuilding are abundant. They are both individual sports which require a “camp” of sorts to prepare for competitions. In fact, these camps even tend to be a very similar length of time. Coaches play a hands-on role in both sports, both require a specific type of gym to train at, extremely hard and grueling training, as well as training partners in most instances. Bodybuilding and MMA both require extreme dieting and mental toughness leading into a competition, in order to make weight and/or be in supreme condition. The similarities in contest preparation alone are downright uncanny. Last but not least, both sports are judged subjectively and are constantly dealing with judging controversies. One would be hard pressed to find two other completely different sports which share as many similarities as MMA and bodybuilding.

So what makes MMA so popular? The same things that make bodybuilding popular. Its ability to turn heads and draw a crowd, as well as the fact that everyone can relate to it. There are few things that turn heads like a fight. High level basketball players at a park will get passed by all day long without a glance from a large number of people. Not so with a fight. Everyone stops to watch that fight. On the same token, a 250 pound man with no visible body fat will also turn nearly all heads within sight. If you have ever spent any amount of time with a well developed bodybuilder, you know this to be true. Everyone has a full understanding of what a fight is, the same way that everyone understands what muscle represents. Nearly every human alive has either been in a fight or has come close to it. They have also nearly all made an attempt to improve the way their body looks. These factors give bodybuilding and MMA an extremely wide reaching spectrum of appreciation. These particular aspects are not found in every sport. In fact, the most popular sports in the world do not possess these qualities at all. Bodybuilding and MMA not only share similarities inside the function of the sports themselves, but they also garner attention and popularity in the same fashion.

One might make the case that the large steroid doses used in bodybuilding will always prevent it from enjoying mainstream popularity. The problem with this notion is the fact that steroids are used in MMA as well, as seen by the numerous failed drug tests which continually plaque the sport. Yes, MMA athletes use far less than bodybuilders do, but the bodybuilders aren’t beating each other nearly to death in a blood bath either. Which is more off-putting? If steroids really are the chief reason for bodybuilding avoiding extreme popularity, then why are they allowed? Why don’t we test our athletes like every other sport, or at least pretend we do like the NFL? Is being 260 pounds shredded instead of 236 pounds shredded really worth zapping our sports popularity to death?

Muscle sells. Everyone loves muscle. Even those who do not are really just jealous of said muscle and/or bitter about their own lack of muscle. There is no great reason why bodybuilding cannot be far more popular than it currently is. Especially considering the fact that a sport which includes bloody beatings and broken limbs, that was actually illegal in the recent past, is now a mainstream phenomenon. MMA was able to overcome all of the ignorance, miss information and negative stereotypes once attached to it and now it is our turn to do same, by any means necessary.