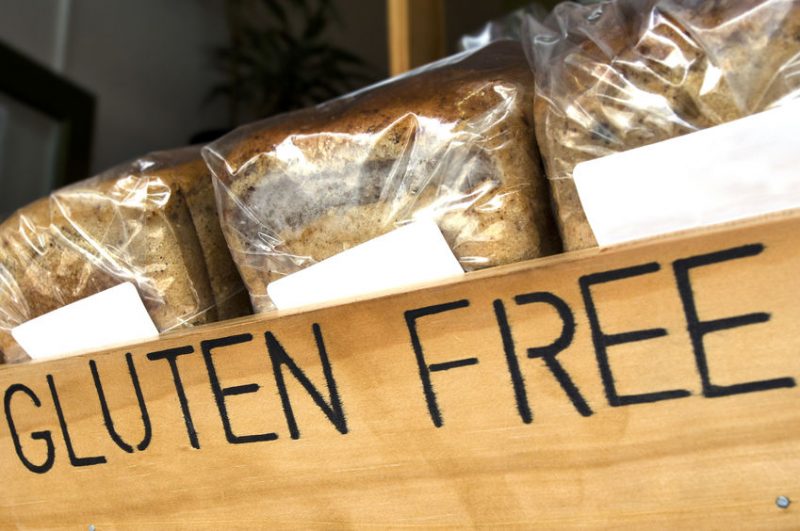 Gluten is a protein composite found in grains like barley, wheat, and rye. It’s used in a wide range of foods and is frequently found in baked goods. The reason being, is because it helps dough rise and creates a chewy texture in foods. Items such as bread, cereals, and pastas are typically high in gluten. Other products where gluten can be found, extend to less likely categories, like preserves, syrups, and even vitamins. Studies have shown that less than 1% of Americans are unable to process gluten. Those diagnosed with Celiac Disease, approximately 1:133 (or 2 million) Americans, should avoid gluten products.

With respect to those who have no issue consuming foods with gluten, there’s absolutely no reason to avoid it, yet one look at supermarket aisles, restaurant menus, and/or (even) a cursory look into the blogosphere, message boards, and self-help websites, and it would seem that gluten should be avoided at all costs, by all people. Parents scour markets, scanning labels, and raising hell when gluten-free options are not available and plentiful. Celebrities seem to constantly Tweet about their gluten-free diets, meals, and stance on life. Gluten has become a four letter word in the dietary world and the market has rushed to accommodate this growing, and arguably pointless, concern. Why are people all of a sudden so consumed with this issue and what does it mean for the fitness industry as we know it.

Nutrition is key, especially in the pursuit of building and maintaining muscle. It’s often said that building great physiques takes place in the kitchen, not the gym. We’ve all heard that time in and time again. The concept is easy enough to understand, but the difficulty for most, is putting the words into practice. The vast majority of people who fall short of building the physiques they want, attribute their results with the fact they couldn’t stick to a clean diet. Now imagine, if you were nailing your macros, never missing a meal, and never settling for anything but the best quality food, but you still couldn’t gain muscle, or even gain weight!

Years ago, I used to train with a friend I met up north. I trained like bodybuilder, meanwhile he trained like an Olympic strongman. Several times we’d sit at the protein bar after some of the most grueling workouts and he’d tell me about the hell that was his life, until he was diagnosed with Celiac. For most of his life, he was rail-thin, he’d eat everything in sight, but could never gain weight. He’d lift and eat, supplement and eat, rest and eat – and nothing! He visited countless doctors and all they could tell him was that he had a fast metabolism or that genetically he wasn’t intended to be anything but skinny. It’s easy to tell a patient just about anything, when blood panels aren’t scrutinized and specialists aren’t involved. As soon as it became clear his body couldn’t process gluten and he began eating gluten-free foods, he gained considerable weight, packing on slabs of muscle, and experiencing a substantial elevation in strength. His life – both in and out of the gym – changed dramatically for the better!

At the time of his diagnosis, my friend didn’t have a lot of food options to choose from. In fact, most of what was available lacked flavor, lacked variety, and was presented in an unimaginative package, with boring labels, and virtually no promotion. Most mainstream supermarkets not only didn’t carry gluten-free products, but they couldn’t care less. Everything’s changed as of the last ten years though, but imagine what things used to be like for those who needed these options.

We’re living in a time/industry where R&D has taken a backseat to graphic design and hype. Imagine buying a product that looked generic, tasted bland, and cost a lot of money. Imagine if you could only find those items in small health food stores and virtually no restaurants. Who would want to buy into that? No one! But therein lies the point. For those diagnosed with Celiac, they didn’t have a choice. Buying gluten-free is not a “want” for them, it’s a need. If anything positive has come from the gluten craze, it’s that the market has responded to the unexpected, unfounded demand, by going all out with branding, packaging, and promotion. The fight for the gluten-free crazies’ money, has given those who legitimately need these foods, the luxury of enjoying foods and snacks that taste good. That was a first!

What’s also shocking is that for those who are not gluten sensitive, there’s absolutely no advantage from avoiding the protein composite in question.

Interestingly, for every study which maligns gluten, there’s a second study which renders the first findings inconclusive. Once science is removed from the equation, there’s no logic or rationale which justifies all the fuss being made. The reality of the matter is that celebrities have always wanted to break with the general public and currently gluten is the in-thing to avoid. This craze has created such a backlash that companies are suddenly re-thinking what products they take to market. Will gluten-free become a bigger niche than organic? Will it be a fad? Will it be something only certain fringes demand, like Non-GMO labels, and/or will it be something that the government will eventually get involved with, such as it did with trans fats and/or high levels of sugar in carbonated beverages, juices, and snacks? I guarantee you that this is a topic all too familiar in boardrooms across Corporate America. By the time it gets on their desks, it’s no longer an issue of whether it makes sense, it’s simply an issue of profits – and profits only.

Profit is key. No one adheres to the notion that “money talks,” better than the business world. While a great many people believe in being frugal, that changes when it comes to their children. They will spare no expense to ensure they get the best. And if you don’t think Fortune 500 companies are lining up to exploit this very noble concern, then you’re nuts. Even the cheapest Scrooge’s of all, will not shortchange their children. Others won’t even shortchange their pets! I’m sure the gluten-free kick will find its way to dog and cat food – though I’m sure that’s old news by this point. It never ceases to amaze me what kind of crap people will eat, but altruistically, deem unacceptable for their kids and pets.

The gluten-free craze targets yet another very important demographic. Most of the people buying these products, particularly those who don’t need them, have the finances to knowingly get ripped off. Consumers who faithfully buy without protest or concern over prices, make for the best suckers, I mean customers. Eventually store brands will step in, doing everyone a big favor by selling identical goods for a few cents cheaper. Nonetheless, even the generic gluten-free option will be considerably more expensive than the regular options. Everyone will earn, from the supermarket chains to the mainstream conglomerates, and the gluten crazies will enjoy being part of something.

At this point, I suspect, we’ll be seeing the gluten craze hit the floor of Congress, followed soon thereafter by the United Nations, and heck, maybe even the Pope will issue an edict prohibiting gluten at the Holy See. By that point, a new craze will be waiting to take off. That having been said, I’m almost positive it won’t be based on lactose. After all, posers love their pizza and ice cream way too much! Can’t part with that, not even in the tireless race to be cool.