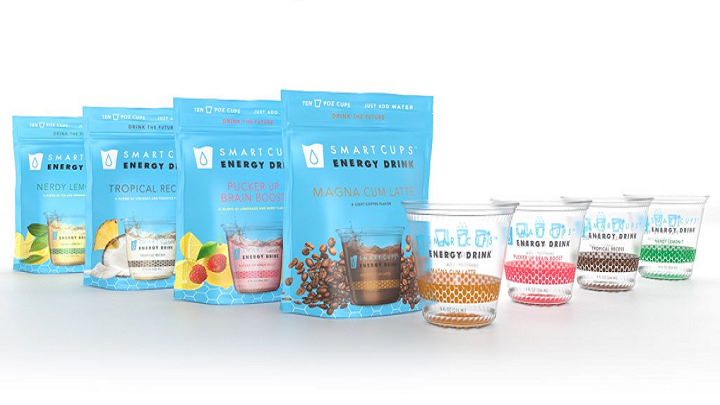 A friend of mine was telling me all about these new “smart cups” on the market. I asked what’s so great about them. He told me that they are a cup that turns into a zero-calorie energy drink. The first thing that came to mind is some sort of sorcery. A cup that turns into an energy drink? What is it? Some kind of Transformer? After a few minutes of trying to grasp this concept, I finally Googled “Smart Cup” myself to see what the heck he was talking about.

After some digging, I found out what Smart Cups were all about. At first, I thought it was an extremely cool concept, then I thought things through a little further and wondered why anyone would purchase such a product. The purpose of the energy drink category has primarily been a convenience play where consumers grabbed something like a Monster or Red Bull from their local gas station or convenience store while running around for a quick pick-me-up.

Smart Cups is simply a 3D-polycapsule biodegradable cup. So, here’s the concept. You go out and purchase a bag of these “cups.” It’s an eco-friendly cup that at the bottom has the flavor system (printed microcapsules containing the active and flavor materials) where when activated by water, fizzes similar to an Alka-Seltzer and turns your plain water into an energy drink without even needing to be stirred. The company claims that it takes the place of heavy cans full of liquid and is more convenient to travel with. But, being that it doesn’t have a lid on it, I’m not sure where the convenience comes into play when compared to a bottle or can that at least offers some sort of spill protection (for instance when traveling with it in the car).

But, here’s my million-dollar question. I have to carry around an empty cup, right? And then I need to either carry a bottle of water around with me to fill it if I’m on the go or go somewhere that I can fill the cup up (like a water fountain or sink). If I’m somewhere with a sink, I probably have a refrigerator or cooler nearby where I can store a real energy drink and just pop the top and not need to worry about going to fill the cup up with water. Not only that but energy drinks purchased at convenience stores are ice cold. Regular tap water isn’t that cold. Therefore, I’m not really seeing the benefit of this product or where it’s more convenient than what’s already on the market.

Without even really testing the product, they are already looking to expand the line into things like protein drinks, sports drinks, coffees, teas, and juices. To be honest, I’m still not sold on their initial launch. I just don’t understand the concept or reason behind its inception.

They are currently selling their nine-ounce cups on their website for $11.99 (contains five cups) and $17.99 (10 pack). Let’s break that down into something we can work with. For the pack containing five cups, that will bring the individual cup (serving) cost to $2.40. For the 10 pack, the cost per cup comes to $1.80 (a little more reasonable). However, you still need to factor in the cost of shipping which drives the cost up even higher.

When you factor everything in, you’re paying just as much if not more for this cup than if you went and purchased a Monster or any other energy drink out there and you wouldn’t need to play Mad Scientist just to drink it. Sure, it’s unique and has some “cool factor” to it, but other than that, it’s pretty gimmicky.

I’ll leave you with some statements from the co-founder and CEO of Smart Cups and hopefully, he can convince you that this is worth spending your money on.

“This delivery system is a scientific breakthrough the food and beverage industry has never seen before. Putting the power of science into a cup, Smart Cups provides a more convenient, hassle-free, and eco-friendly beverage experience for consumers. We’ve developed a game-changing delivery method that consumers will be able to experience through our initial line of energy drinks. This delivery system print technology will become the new standard for a variety of industries including pharmaceutical, beverage, water purification, and beyond. Just think about how heavy 30 Red Bull cans are, but then consider a stack of 30 empty cups.”

Still not sold? Me neither. Frankly, I think he’s delusional.