Newer PostGregg Valentino, Big Frank, LIVE – Arnold Classic / Luimarco
Older PostCould We Have Asked for Any More From the 2018 Arnold Classic?
Share on FacebookShare on TwitterShare on LinkedinShare on Pinterest 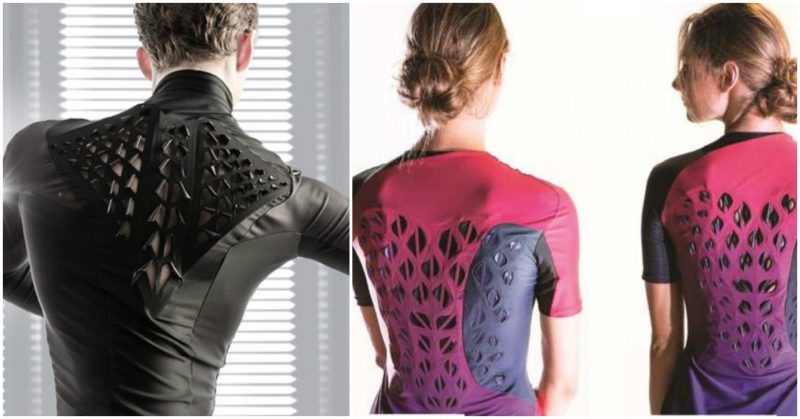 With so many gizmos and gadgets out there today, it’s only normal for researchers to come out with something new for the fitness community. With the launch of things like Nike Dry Fit and Under Armour Cold and Heat Gear, we’ve seen some pretty cool advances in technology. Yet, it appears that wasn’t good enough. A group of researchers at MIT have created a self-ventilating workout suit that supposedly helps keep the wearer cool and dry. What brand could possibly be interested in such futuristic wearable technology?

New Balance. You might be as surprised as I am in hearing their name. When I think of apparel with breathability, I think of Nike and Under Armour before anyone else. The fact that New Balance is stepping up their game is actually exciting. Especially since out of the top five fitness apparel brands, they are pretty much falling behind the likes of the brands already mentioned as well as Adidas and Reebok. Could the technology catapult them ahead of others in the market? I don’t believe so, but it’s a valiant effort put forth by New Balance. I was never really into the apparel side of their brand, yet I owned a few pairs of their shoes—which I thought were great. Dumping money into this research could yield amazing results (sales) or turn into a “cash and burn” moment of epic failure.

I’m not going to lie, while this suit might appeal to some, I think it’s utterly ridiculous. It looks like something a super hero would wear in an action movie or comic book. It’s unclear how much they will run for (cost) when finally released, but if you ask me, they couldn’t pay me to wear it. I could potentially see professional athletes using this technology but for the normal gym-goer, it seems like a complete waste of money. The only other potential use I could see for it would be if you live in an extremely hot climate, and you work outside part or most of the day, and would need the ability to lower your body temperature and keep cool.

Each suit has latex flaps that cover your back which are lined with live microbial cells. No, that’s not a typo, I really said “live microbial cells.” Pretty weird, right? These flaps are placed at specific locations based on where the researchers noted the body produces the most heat and sweat. Also based on the specific area of the back that shows the most heat and sweat, the flaps can be anywhere from the size of a finger to as small as a fingernail. One researched said, “People may think heat and sweat are the same, but in fact, some areas like the lower spine produce lots of sweat but not much heat. We redesigned the garment using a fusion of heat and sweat maps to, for example, make flaps bigger where the body generates more heat.”

Some of you might be asking about any possible or potential health risks or concerns with having live cells on your skin thanks to this new technology. The researchers mentioned that the microbial cells themselves are safe to touch and even consume—but they clearly aren’t recommending that you try to eat your shirt or lick it as they would not provide any value to your health.

As if this technology isn’t futuristic enough, they also mentioned that they have the ability to create cells that light up when moisture touches them. So, as you sweat, apparently the cells would light up on your apparel thanks to the addition of green fluorescent proteins. One researcher mentioned, “These cells are so strong that they can induce bending of the substrate they are coated on. We can combine our cells with genetic tools to introduce other functionalities into these living cells. We use fluorescence as an example, and this can let people know you are running in the dark. In the future we can combine odor-releasing functionalities through genetic engineering. So maybe after going to the gym, the shirt can release a nice-smelling odor.” Now that, would be a really cool feature, to be able to not smell like a skunks rear-end after an intense workout.

Utilizing the same technology as in their shirt, researchers looked at the foot as another area where this technology would come in useful. They looked at the areas of the foot that generally give off the most heat and moisture and formed layers of the fabric (with the flaps being able to open downward) that shaped the insole of the shoe. This is actually brilliant as many people suffer from sweaty feet, even when they aren’t exercising. The shoe technology would be something I’d be interested in giving a try. It might be something they put in the shoes at the time of purchase, but I would love to see some sort of thin insole that you could put in with this moisture wicking and cooling technology.

Their research was very thought out as one researcher said, “In the beginning, we thought of making the flaps on top of the shoe, but we found people don’t normally sweat on top of their feet. But they sweat a lot on the bottom of their feet, which can lead to diseases like warts. So we thought, is it possible to keep your feet dry and avoid those diseases?”

When researchers had participants come in and exercise in a controlled environment, they were able to see first-hand how miraculous this technology is when compared to other workout apparel that doesn’t don this technology. One participant said, “It felt like I was wearing an air conditioner on my back.”

From the research that has been completed, it certainly appears that this technology works. The question is, who will it be marketed towards other than the running population that they pulled in as participants in their testing? Will the price point be so high that no one will be able to afford it, let alone buy multiple shirts if they exercise regularly? Will it make sense for non-exercisers to utilize this technology if they are people who perspire a lot? More importantly, how long will the shirt last with the live microbial cells on it? Can it go through the washing machine and dryer? What stipulations come with such a technology using live cells?

Being that there are many uses for this type of technology, the researchers are hoping to work with many different sportswear brands in hopes that they include this technology in new apparel launches. Will they be receptive or skeptical like myself? Not only that, but I’m not sure how they structured their deal with New Balance and if they would have an issue allowing other brands to utilize this technology. Only time will tell. But, I for one, unfortunately don’t see a need for this in my wardrobe other than potentially the shoe insoles.

What say you? Do you feel this wearable technology would be something you’d invest in and give a shot? Are you someone who sweats a lot and finds value in a self-ventilating shirt? Let us know in the comments or let me know on social media @weikfitness.