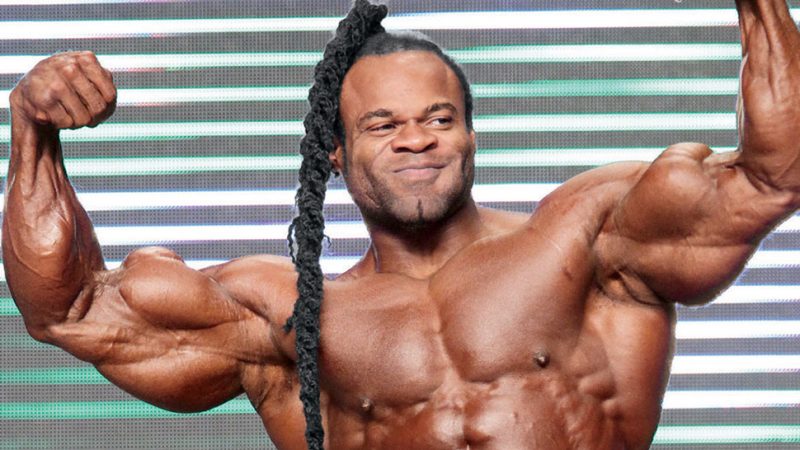 If you’re a bodybuilding fan, chances are you’ve heard about Kai Greene and the many great victories he enjoyed. Fans from all over the world have his posters and reminisce about the glory days, when The Predator dominated the sport. Whatever contest he entered, the NYC-based giant would dominate. On his many world tours, he commanded large crowds. In India, throngs of fans took to the streets. In China, word of his arrival spread faster than wildfire, as if each fan played the role of a modern day Paul Revere, making sure everyone knew that Kai had arrived. Many fans cried tears, others yelled, others were simply grateful, grateful that they could see such a man in their lifetimes.

And that’s just it, Kai Greene is larger than life, the myth about him has become even bigger than the person. We haven’t seen Kai Greene compete at an Olympia since 2014. In 2015 he nearly competed, but was under the impression he’d been banned, and released a video sobbing in the dark. In the years of his absence, a lot has changed, most notably the crowning of a new champion, in Shawn “Flexatron” Rhoden. The pecking order has also changed, with new faces like William Bonac, Roelly Winklaar, and Brandon Curry breaking into the Top 5. Others, like Big Ramy & Dexter Jackson find themselves in new, unfamiliar placings. The big question now, isn’t so much if Phil Heath will regain his title, but more realistically, will there be a surprise threat, a name from the past, returning to upset the apple cart.

Kai Greene is definitely a fan favorite, but he’s someone who essentially gave up – he quit. For whatever reason, perceived or actual, he had to make a decision and the stage was not it. Unlike Cutler and Rhoden, who would eventually see their efforts pay off, Greene opted to do movies, mainstream radio shows, and embark on promotional tours behind his new company. In many ways, Greene’s path was similar to that of Lou Ferrigno in the 1970’s. There’s no question Ferrigno would have eventually won the Sandow, even per Arnold’s own admission, but it took him nearly two decades before returning to the stage.

There’s nothing wrong with choosing different career paths, but bodybuilding is not a sport that’s easy to get back into. Many have raised the point that Greene has kept the size, but size alone isn’t enough. These folks are basing everything on the Kai Greene they saw back in 2014, over four years ago, and coupling that nostalgia with the fact Greene hasn’t lost muscle. That’s quite a gamble.

Another factor working against a potential return for Kai, is the fact he’s proven to be very difficult to work with. Despite being granted special permission to compete after the contract deadline in 2015, Greene failed to compete. This is particularly concerning for an event as important as the Olympia. Contract deadlines are there for a reason. The Olympia is the biggest contest in the world and there’s a vast promotional aspect to the competition. If promoters don’t know who’s competing, then how can they create campaigns? Who’s going to wait till the 11th hour to know if a major star will appear or not? The track record in question isn’t a promising one. If I were a promoter, I’d want some definite assurances that Kai would compete, but even with those in place, the prospect of him being a no-show, are quite high.

There was a time when Kai could write his own ticket, but nowadays, most of the new fans are have new heroes. Kai went from being someone in contention to win the Sandow, to just another big name pushing protein powder and pre-workout products. He should never have left and he’s probably regretting it as we speak, but that ship has long sailed.

The idea that Greene could come back after four year and jump over veterans like Big Ramy and Dexter, not to mention guys hitting their prime, like Bonac, Winklaar, and the ever-promising Brandon Curry – is darn near preposterous. Phil Heath is still in the mix and Kai hasn’t beaten him in a decade. But the biggest obstacle to Kai emerging from a victorious Olympia comeback, is the current champion, Shawn “Flexatron” Rhoden. In order for Kai to beat Shawn – or anyone else for that matter to do – will require a revamping of his physique. The reigning champ sets the look of the day. Aesthetics are in, symmetry is in, and mass is now in the backseat. Kai is bigger and freakier, but that look is not going to upset the apple cart.

The same way Phil got numerous wins by the skin of his teeth, so too, will Shawn enjoy that deference. Kai will have to knock Rhoden out, the same way Rhoden knocked Heath out. That’s not going to happen any time soon, and it certainly won’t happen from anyone who hasn’t competed in four years. Also, if Kai were to compete in 2019, for example, that’ll be his first contest in five years – that’s half a decade!!

Yet another factor that cannot be quickly dismissed, is the legacy factor. Kai Greene went out on top. He’d won Arnold Classic titles and taken runner-ups at the Mr. Olympia. If he returned to the stage after five years and didn’t place 2nd or better, his brand could be negatively affected. It’s one thing to quit for greener pastures, but a comeback (for the right reasons) would have to be because the athlete wanted to prove something, hopefully something beyond making a few bucks. If Greene returned not at 100%, expecting to take up from where he left off in 2014, he might be in store for a rude awakening. If Greene hit the Olympia stage and finished, say 5th, 6th, or barely inside the Top 10, that would be a devastating blow. He’d lose fans, he’d lose money, and he’d look rather silly. Also, if he came at anything less that 100%, it would show little respect for the sport.

I just don’t see a Kai Greene comeback as anything at all likely; however, that’s not going to stop certain media outlets who are dead set on gaining subscribers (at whatever the cost) and earning every last penny possible through shameless, incessant clickbait. Sadly, those same media outlets have succeeded in having us address their speculations here at Iron Magazine.

Kai Greene will go down in history as one of the great bodybuilders of this decade. The epic showdown between Greene and Rhoden will play out on message board hypotheticals, while others will continue the debate over whether Greene ever truly beat Heath. Kai will continue doing world tours, appearing in movies, and selling supplements left, right, and center!!