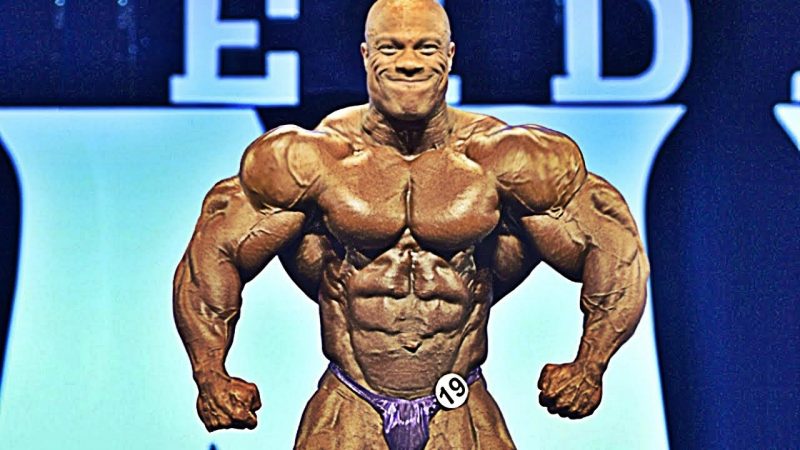 A simple answer to this would be anyone is beatable on any given day. However, Phil continues to bring a good enough physique to the Olympia stage to take home the Sandow. Will 2018 be any different or will Phil once again prove to the world that he’s at the top of the bodybuilding food chain?

As history has shown…

Even when Phil isn’t his best, it’s still good enough to win the Olympia. I’m extremely critical of Phil, and there have been a few Olympia’s where I didn’t feel that he should have won. But, for whatever reason, the judges must have seen something in person that I couldn’t see through a television screen (live broadcast).

I do need to give Phil credit where credit is due. He has listened to his critics and has really brought up his lagging body parts. His back was one area that I felt he was really weak, as well as his chest due to his clavicles and being very narrow throughout the chest. While you can’t change the structure of your bones, Phil has silenced all of us by adding slabs of mass to his back and chest. His shoulders are like boulders and his arms are simply massive.

One area that I feel Phil needs to improve on is his midsection. It seems like after adding several pounds of quality mass to his frame, his stomach is distended and large enough that I feel he should be penalized for bringing it to the stage (yet, this can be said about many of the competitors on the stage today).

Phil noticeably had a hernia at the 2017 Mr. Olympia contest that he confirmed after his win, and followed it up with surgery. It didn’t take Phil long to recuperate before he was back in the gym training. And from looking at photos, he didn’t miss a beat.

There are quite a few competitors that could rain on Phil’s parade at this year’s Olympia contest. Big Ramy almost ruined Phil’s streak in 2017, but Phil narrowly edged him out. If Ramy makes improvements this off-season and can still hit his conditioning, we might be seeing a new Mr. Olympia.

Another competitor that has been impressing many of us is William Bonac. While placing 3rd in 2017, many thought he should have beat Ramy and took home 2nd place – I was one of those people. Bonac has a ton of size for such a small frame and reminds me of Kai Greene. Can Bonac add any more size to his frame and manhandle Phil? I don’t think so, but, if he comes in shredded with the amount of muscle he already has, anything is possible (assuming Phil would come in a little off).

Dexter, the vampire-himself, would love to come into Olympia weekend and steal the show. However, even with an amazing physique at his age, it won’t be enough to even get him into the top three. I’m a huge fan of Dexter and would hate to see a major show without him present, but I’m not sure how much longer he is going to be able to beat Father Time.

Unless something happens to Phil (injury or missing his mark), I don’t see the judges handing the Sandow to anyone other than Phil. Honestly, I think they want to see Phil win 10. It would be a cool feat to experience and see a new record, but I’m not sure Phil will be able to hold off the competition that long. Competitors like Ramy and Bonac are eager and determined to knock off the king and win their first Olympia title.

When it comes to 2018 results, I can easily see the top three being identical to 2017 or have Ramy and Bonac flip-flop. I don’t see any dark horses coming in and making a splash in the top three. Roelly has the size, but his conditioning is always an issue. Rhoden in my opinion, while he looks good, is just a more muscular Classic Physique competitor. If I were a betting man, I would lay down a bet that Rhoden will never win the Olympia. If he wants to add some wins behind his name, he’s going to have to stop sitting out all year and start showing up at other shows.

There are two things that concern me slightly about the 2018 Olympia and that is how Phil and Bonac have been conducting themselves off the stage. Phil talks a good game while on stage and comes off as a good ambassador for the sport, but after his win in 2017, he was rude, obnoxious, and ingenuine after his win with post-contest social media chatter. He has thin skin, and that’s something you can’t have at the professional level. Suck it up, laugh it off, and get to work.

Bonac, on the other hand, had some choice words overseas with a YouTube personality that in my opinion shouldn’t sit well with the judges or the IFBB. I think something should have been done following both competitors tantrums. These events were an extremely poor representation of the IFBB, the sport of bodybuilding, and of them personally. There’s no room for such actions and stunts in bodybuilding. The sport already has a target on its back, and we don’t need our largest ambassador and an up and coming future Mr. Olympia acting the way they did.

Overall, I think we are in for another amazing Olympia this year. I wish all of the competitors the best of luck with their final weeks of Olympia prep and can’t wait to see the packages they bring to the stage in a race for the title.