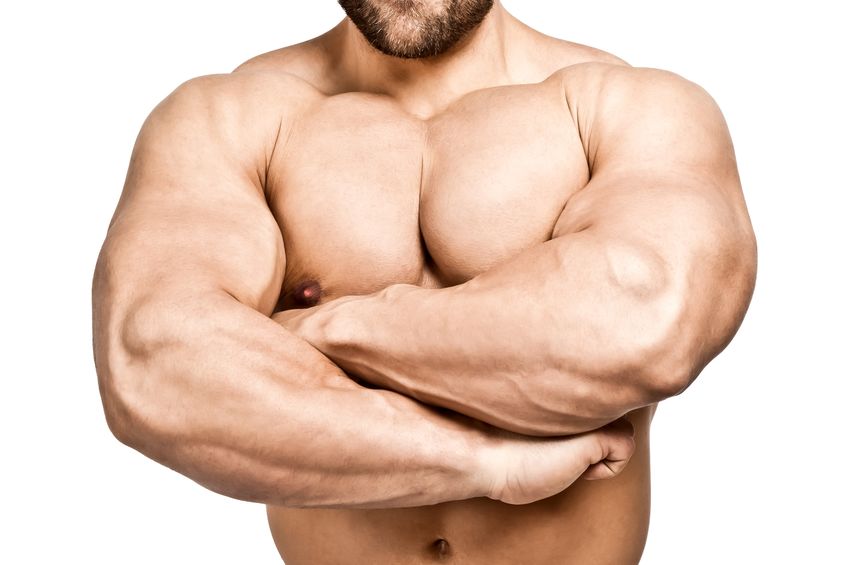 First and foremost, I generally don’t care about the whole natty vs enhanced argument. I think what ever people do supplement-wise is their own business. I think it’s very impertinent to walk up to someone you don’t know and ask if they’re taking gear or not. Truthfully, performance enhancement drugs are in every sport, from bodybuilding to MMA to football and baseball. We can believe that this sort of thing is limited to physique and strength-based sports, but that would make us laughably naive. In most cases, it’s a cat and mouse game. Sport federations who implement testing, try their best to find those who are using banned substances. Some athletes try to beat the tests, use masking agents, and/or time when they take certain products, calculating when they’ll be out of the bloodstream/system. Is it unfair? Of course it is, but I don’t get into it.

I don’t spend any of my time deliberating which lineman is naturally an ox and which one became one through using synthetic hormones. In most sports, using banned substances is a dirty little secret no one talks about. There is an NFL, but it doesn’t stand for the Natural Football League.

It’s only when it comes to physique-based and strength-based sports that we have any sort of line drawn. The difference between natty and juiced competitors in physique-based sports can be painfully obvious. Size is a dead giveaway, as his dryness and conditioning. In strength-based sports, those who are chemically enhanced can lift considerably more, breaking some pretty jaw-dropping world records. The difference between chemically-enhanced powerlifters and their natural counterparts is almost as pronounced as the difference between shirted and raw. But like I said, i could care less about who’s juicing and who’s not. That having been said, if you’re juiced to the gills and you decide to compete in a natural competition, you’re a jerk. Let me explain why.

Bodybuilding, like powerlifting and strongman, has had an undeniable history with performance enhancement drugs. For a long time, no one talked about gear in bodybuilding, and no one really does in the strength-based world, today; however, bodybuilding is a totally different animal.

In powerlifting, you might sell some lifting shirts, maybe a weight-training belt, or some ammonia to sniff. The market is pretty small and sponsorships, as we know them in the fitness industry, are unheard of. In one camp you have bikini girls and muscled-up guys appearing in professionally-produced online series, magazines, and even making their way onto the silver screen. In the other camp, you have a much more low key bunch, focused on hard work, breaking records and keeping to themselves. Although these two sports are two totally different animals, the juice runs freely in both. The one thing they’ve historically had in common, is silence on that dirty little secret.

With the advent of the internet, particularly social media, some bodybuilders wanted even bigger audiences. The most surefire way to get attention online, is being outrageous, and nothing was more taboo than talking about things the industry frowned upon. Today, everyone talks about everything; there’s nothing related to building muscle, getting ripped, or dialing in a competitor that’s really off limits. Again, whatever people want to use, it’s their business, it’s none of mine.

Where I have a problem is where dishonesty rears its ugly head. When it comes to major league sports, I believe a lot more players than we know of are probably getting through loopholes. I also believe those federations have a lot more resources to find those cheating the system. Then again, I can’t be a hypocrite. It’s wrong there and it’s wrong in bodybuilding too, but the fact someone would juice up like a gorilla to go compete against guys getting by on protein powder and creatine is totally messed up!!

I think everyone has their path and earning top honors in a subjective sport is no cake walk – not for anyone. If someone takes performance enhancing supplements and they go all the way in terms of competition – that’s awesome. Most of their accomplishments will be the product of their hard work, their self-sacrifice, and years and years of hard work. However, if you add gear to the mix, you’re getting a lot more than a mere 10% (as some champions have stated).

When someone is basically a walking pincushion and they have the nerve to say it’s 90% nutrition, I just about want to slap them across the face – figuratively speaking. In all honesty, the “slight edge” in many cases is a lot more critical than some would like to have you believe. And yes, it’s true, if everyone used these substances, would we have a bunch of superstar bodybuilders? Absolutely not. Genetics play a huge role, as well as all the hard work, but even a mediocre athlete with enough sports enhancing supplements in his arsenal, can defeat a top tier natural competitor who may be bring 90-95% to the stage.

Fake Natties competing in tested events are losers.There are people who aren’t ready to win anything. Some of these folks not only aren’t currently ready, but they never will be. They don’t want to work hard and they’re always looking for ways to hustle and/or get something with the absolute least amount of work possible. If someone is taking anabolics, stacking anabolics, and employing cutting agents to compete at a natural show, then I have absolutely no respect for them. There are people who know what to use, how much to use, and when to use it. Some are so good at being scumbags that they know what will show and what won’t. These hustlers make, even, politicians look like choir boys. Some of the worst of the worst fake natties can pass a lie detector test in their sleep. To them, blood tests are a gag – urinalysis an even bigger one. When you see them take the stage, sometimes weighing 20-40lbs more than anyone else up there, it becomes blatantly obvious, but if their cheating can’t be proven, some federations will simply stay quiet. Some federations won’t risk a lawsuit, especially if they can’t prove it.

Many of these Fake Natties frequent the small to tiny tested federations throughout the country. They wouldn’t dare step foot on the best stage on the planet, but every once in a while…, a test comes back and someone gets DQ’ed.

Testing is largely for the birds. Testing like anti-virus software – is only good so long as it works. The same way hackers always find a way, so too do guerrilla chemists and shady competitors. In the end, it’s all about ethics, but a lot of people today, are clueless as to what those are.

I have a ton of respect for anyone who makes their dreams into a reality, but how you get there still matters. If you’re juicing, please have a little integrity and don’t try to go for the easy win at a natural competition.

I hope you enjoyed this article at Iron Magazine. Please be sure to leave a comment, whether here or wherever you may see this article. Thanks for reading.