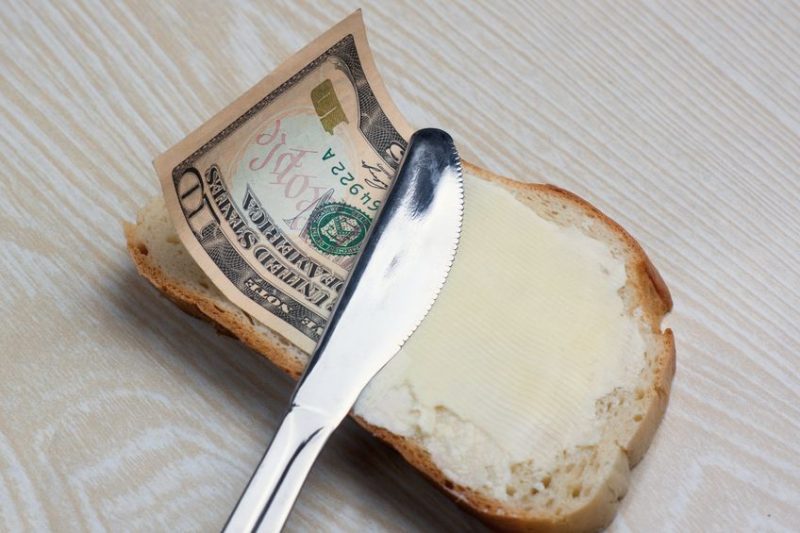 There’s a cheesy sales pitch that’s always used around the Holidays, it goes like this, “Say Hello to Good Buys.” Get it? Well, I’ve always found it rather humorous, but it should definitely give you some food for thought. Everyone wants to save money, usually because they want to pool their resources for something important. Some folks save money to go on a vacation, others save for a car, and some save for their retirements or the proverbial “rainy day.” The irony though, is that you won’t be around for that rainy day, much less your retirement, if you’re dead as a door nail.

As Americans, we’re plagued with onset adult diabetes, coronary heart disease, high blood pressure and your run of the mill issues with obesity. Many of these problems could have easily been avoided if those afflicted with illnesses had had more access to fresh fruits and vegetables, less processed whole foods, and less interaction with cheap fillers and flavorings, from endless preservatives, bad fats, and artificial sweeteners, Most of the foods that have been highly treated and processed are among the cheapest, while those which are less manipulated, fresh from the Earth, and readily available in the countryside, seem scarce and are oftentimes very expensive. Why is that? When’s the last time you saw some fresh, red delicious apples by the cash registers. Imagine seeing apples, pears, and c antelope slices in the same place where you see Snickers, Mars bars, and Butterfingers. The fruits would cost less, taste better, and promote health and well-being. Interestingly, I don’t know of a single market that employs this approach – not mainstream supermarkets, not small mom and pop health food stores, either. When it comes to diet, it’s all about how people think, what foods are known [to people] to provide satiability, and how culture evolves, if at all.

Let’s go back to the chewing gum, candy bars, and sweets by most registers, at most markets, throughout the United States. Most kids nag their parents about buying these impulse items and parents usually will say no. They’ll say no for a variety of reasons. For starters, some parents may use these snacks as a reward for good behavior. Others might be saying no, simply because it’s a better deal to buy the packs in the aisles (or even wholesale) than buying them individually at the checkout lane. Others may indulge their kids, buy the bars, but only do so on the condition that the snacks be consumed after a meal. No matter which the situation that may be happening, in all of the aforementioned situations, the candy bar is the pot of gold at the end of the rainbow. Fresh fruits and vegetables are the stuff you have to eat – not that you want to eat. It’s not even just about parents and their kids. Look at school meals, hospital food, look at how menu items are put in order. Dessert is the culmination of the meal. If only mainstream eaters looked at fruits the way Low-Carbers do, then farmers would be sitting on piles of gold. Low Carbers are keen to the fact that fructose, or fruit sugar, has a huge impact on insulin levels. That’s not entirely such a good thing, either, but fruits could very easily be thought of as candy from the Earth, because in many ways, that’s exactly what it is. Most fruits are very sweet, lack any real protein or fat, and keep us satisfied for very short periods of time. The saving grace for some fruits, however, is fiber. Fiber has a way of keeping us satiated and the more fiber involved, the less damaging will the insulin spike be. Fiber can also determine whether a fruit or vegetable can be pulled out of the simple-carb category and be placed in the more favorable complex-carb category. Contrary to new age thought, calories aren’t all the same, and that applies to carbs as well.

Still, for as sweet as fruit may be, it’s not as sweet as the hype surrounding highly processed junk food. Marketing places a very big role in how people think – both in the present time and the future. If all ads stopped today, most people in varying stages of adulthood, will already have some pretty well ingrained notions about nutrition. It would be very difficult and require almost an all out media switch, for adults to see fruits as appealing as candy bars. Much of what we know to be true, is far more the result of nurturing (teaching), than nature. When it comes to diet – from nutrition to indulgence, very few humans eat according to how foods make their bodies feel. Eating for performance is something almost exclusively reserved for those participating in physique and/or strength-based sports. Even those playing mainstream sports, will more than likely lack that enhanced knowledge. Those competing in physique-based sports have a huge leg up on everyone else. They know what foods will make them flat, what foods will fill them out, and many are accustomed to studying their own genetic profiles, that they even know how their bodies respond to specific essential and non-essential amino acids. Most people, couldn’t even tell you what an insulin spike feels like, much less how damaging those can be to metabolism and overall health. Most Americans who suffer from obesity will starve themselves long before they study macronutritents and their effects on metabolism. Society simply isn’t programmed to care. Even some registered dietitians are clueless. People don’t eat for vitality, they don’t eat to perform better; they simply eat because they’re hungry and they’ll shovel whatever feels exotic into their mouths. A sign of independence for a young adult isn’t simply cooking for oneself, but being able to have pancakes for dinner. Why? Because pancakes, like Butterfingers, are reserved for dessert. Like the Pink Floyd song goes, “how can you have any pudding if you don’t eat your meat?”

Think about all the people who heard Another Brick in the Wall. To them, pudding is the prize. Try changing that perception. Good luck!

Satiability is key. If you’re hungry, a plate consisting of complete proteins, good fiber, and healthy fats will do the trick. You could even have some tasty complex carbs. Provided the person eats the meal, chews the food, and lets it digest, then that person will be satisfied – they’ll be satiated. Chances are though, that the meal in question will come from a drive thru window, amount to an incomplete protein, lack complex carbs, lack fiber, and lack good fats or protein. Chances are, the person won’t let the salivary enzymes hit the food and they won’t chew anywhere near as much. Chances are, they won’t let the food digest properly and will eat more – because they’re still hungry. When the person has eaten far more food than necessary, heartburn and indigestion will kick in. If the person eats too late at night, the person won’t sleep properly, and the digestive process will not be completed. Not only will the person suffer GI distress, they won’t rest, and the fallout will likely spill over to the next day. This situation will play itself out over and over again, because the madness is the person’s reality.

It’s highly unlikely that society as a whole will come to grips with this problem and collectively change. Schools are trying to counteract poor eating choices in schools, but students are only in class 9 months out of the year, for eight hours a day. The time away from school, is just enough to undermine everything they’ve learned insofar as healthy eating. Also, healthy eating is reserved only for students on school lunches. Students who bring their lunches from home or bring money to buy whatever they want, are unlikely to buy a side of celery over buying a bag of Cool Ranch Doritos or Cheetos.

I hope you enjoyed this article at Iron Magazine. Unfortunately, I don’t have all the answers and we leave this article with a giant question mark for an ending. I invite you to leave your comments, whether here, or wherever you may see this article. Only time will tell what happens. In a world flooded with cheap junk food, dollar stores at every corner, and weight-related issues plaguing the population, the future looks grim.