Dimethandrolone is a relatively new, amazingly powerful, anabolic androgenic steroid currently being tested in men for androgen replacement and as a male contraceptive. Although it’s been in the human-testing phase for only a few years, it’s actually been under development for the past two decades by the United States Contraceptive Development Branch of the National Institute of Child Health and Human Development. A patent for dimethandrolone was filed in 1997 and granted in 1999, while a patent for it with the undecanoate ester and buciclate esters was filed in 2002 and was granted in 2003.

A quick look at the nomenclature (specifically the part that reads “19-nortestosterone”) tells us that Dimethandrolone is a member of the nortestosterone (progesterone) family. This is also where we find nandrolones (Deca-durabolin, etc…) and trenbolones (Parabolan, etc…), which almost certainly reveals quite a bit about the compound.

Firstly, it’s going to cause a complete shutdown of natural gonadotropins, including follicle-stimulating hormone (FSH) and leutinizing hormone (LH). Inhibition of the former will decrease sperm production, while inhibition of the latter will decrease testosterone production. Nandrolones and trenbolones are infamous for these (typically unwanted) effects, and there would be no reason to expect that Dimethandrolone will be any different.

But this is a double-edged sword, as many 19-nortestosterone aficionados have discovered. Using a progestin to will quickly and reliably produce a sperm count below the level necessary for conception…but can also cause sexual dysfunction. It seems almost too obvious to warrant stating, but a male contraceptive that prevents sexual intercourse is going to be counterproductive (or at least redundant).

Progestins are infamous for this effect and for this reason, many anabolic steroid users who choose to include them in a cycle, will also include some form of testosterone. Progestins also possess the ability to aromatize and to convert to a dihydrogenated version, and are easily detectable on a standard doping test, often for months. This property may provide additional incentive for scientists to develop male birth control from this family of steroids, as athletes would be naturally disinclined to pursue them for doping purposes.

Again, looking at the nomenclature for the base chemical (i.e. not inclusive of the ester), it’s evident that DMA is not methylated, which would normally imply that it’s meant to be used parenterally (as an injection), and with the addition of an ester, this is true 99.99% of the time. But DMAU (DMA with the undecanoate aka undecylate ester) is the exception to this rule. Dimethandrolone can be attached to other esters such as buciclate and dodecylcarbonate, but it appears that most (or at least the first) of the commercial attention will be focused on the undecanoate ester.

Esters are fatty acids attached to the parent hormone with the intention of making them slower to dissolve in the body (usually from the depot formed through injection). With a very long fatty acid, the compound becomes less like a powder and more like a viscous liquid. The undecanoate ester is exceptionally long, and because it turns the DMA into a liquid, the resulting product can be placed into a gelcap (normally with castor oil), and used orally. This allows it to avoid first pass metabolism through the liver and be absorbed through the lymphatic system. Andriol (testosterone undecanoate) is another notable anabolic steroid that utilizes this delivery method.

Compared with methyltestosterone, and methylated oral steroids in general, Andriol is far less toxic to the liver (hepatoxic), and this is true of oral DMAU. Less toxic, however, does not mean non-toxic.

It should be noted that this is an extremely inefficient and expensive way to deliver anabolic steroids. Injectable testosterone with the undecanoate ester would deliver full androgen replacement for an adult male. However, put that same amount of testosterone undecanoate in a pill, and it would take five pills per day, every day of the week. The trade-off is convenience and comfort. Many people simply prefer not to inject, and compared to other anabolics (that pass through the liver), the lymphatic delivery route provides far less (not zero) danger of hepatoxicity.

So while this steroid is new, many of its characteristics appear to be highly predictable, and recent clinical data bears out the assumptions that can be made through examination of the nomenclature.

Three doses of DMAU (100, 200, and 400 milligrams) and two different carrier vehicles (castor oil and powder) were tested in a study involving 100 healthy men aged 18-50 years old, for a total of six different groups. Each randomized group included five subjects who received a placebo and 12 to 15 men who received DMAU (*again, at one of the previously mentioned doses and in one of the two carriers).

The study lasted 28 days, during which time the subjects consumed their pill with food. By the end of the study, 17 men had dropped out for various reasons (not uncommon).

Subjects receiving the highest dose of DMAU exhibited hormone levels that were reduced below the level necessary to conceive (DMAU was therefore successful as a contraceptive). All of the groups also experienced weight gain and decreases in HDL (“good”) cholesterol, while passing all safety tests (liver and kidney function). Although testosterone levels were significantly decreased, sexual dysfunction wasn’t a problem.

The idea to consume DMAU pills with (fat-rich) food is likely based on evidence from Andriol (testosterone undecanoate in castor oil) studies, absorption studies, where it was ascertained that blood plasma levels of the parent hormone were much higher when the pills were consumed with food.

That evidence was confirmed through a Phase 1, randomized, double-blind study that examined escalating doses (25-800mgs) of DMAU in a fasted state versus following a high-fat meal. At each dosage level, ten men received DMAU and two men received placebo. Serum DMA was measured after ingestion. When consumed in a fasted state, it was only detectable in 40% of the participants, and then only after the 800 mg dose. When consumed following a high-fat (50%) meal, DMA (the parent hormone with the ester metabolized off) was detectable in all participants starting at the 200 mg DMAU dose (which also significantly decreased gonadotropins/testosterone), and showed an increase up to 800 mg (the highest dose tested). Hence, taking DMAU pills without a fatty meal is going to be almost entirely ineffective.

Although 19-nortestosterones are able to be aromatized (metabolized to estrogen), DMA does not seem to do so. However, as a progestin, many users will experience side-effects that are similar to those produced by aromatizable steroids. In addition, since it lowers testosterone levels, it’s actually going to lower estrogen levels as well (as there is no natural supply to be aromatized). Typically, lowering both testosterone and estrogen will produce sexual dysfunction, although that wasn’t reported by dimethandrolone test subjects. In addition, it doesn’t appear to 5a-reduce (convert to a dihydro-version), it is unlikely to produce hair loss or any of dihydrotestosterone-related side effects. 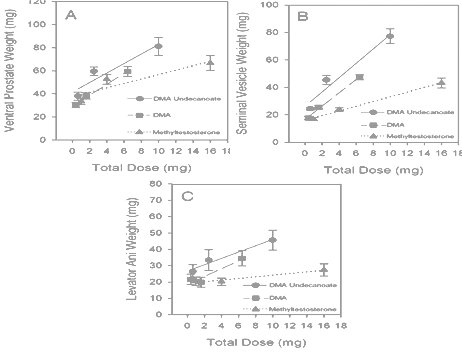 Animal data also indicates that the effects of DMA on sperm production are reversible, but this is hardly surprising, as it is a characteristic shared by nearly all anabolic steroids.

At this stage, real-world feedback is lacking, and DMA/DMAU’s effects in bodybuilders and other athletes have not been reported.

It’s not unreasonable to suspect that if DMAU finds it’s way onto the black market through an underground lab (a near-certainty), it’ll be an injectable. It’s also not unreasonable to expect that if it ever hits the legitimate pharmaceutical market, some users will squirt the contents of the gelcap into a sterile oil solution and use it that way. Underground wisdom holds that if you’re not ready to inject, you’re not ready to take steroids.

Expect that this compound makes its way onto the market sooner rather than later, and as an injectable rather than oral.