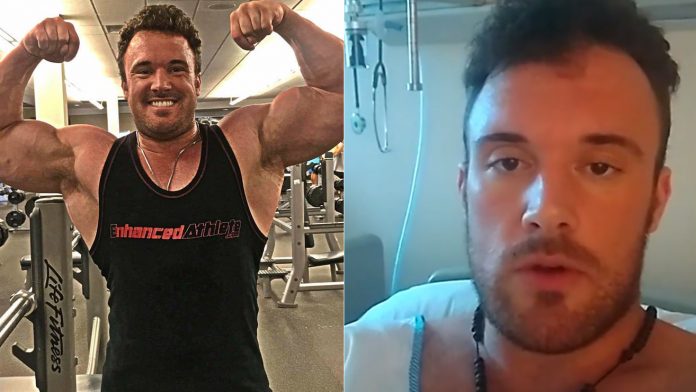 This is the story of a community that came together to help one of its own. “Dan The Bodybuilder” just lived through a nightmare, the worst seems like it may be over, but who really knows. A few days ago, I saw a video that showed a somber sounding and somber looking man in a hospital bed in Thailand. He pled for help, after many surgeries, trying to save his leg after injecting what he calls bad gear. The cost of one surgery, let alone multiple, can be astounding, but this was a man who had clearly exhausted his resources and was seeking help from the bodybuilding world. Many of the biggest websites and media outlets in the sport, took to the cause, as well as fans posting threads on various message boards and blogs.

Although some were quick to judge, the vast majority of folks were quick to set their personal criticisms aside and tried to figure out a way to help this individual. There are so many people quick to demonize any cause, particularly when there’s a GoFundMe involved. It’s really kind of bizarre, because, if any anything, people have the right to do whatever they want with their money. Some people like to spend their money on themselves, others have a hole burning in their pocket and they’ll almost throw it into the wind. Some people, however, actually like helping others – call it paying it forward, charity, or just trying to make a difference. It seemed everyone was getting the word out, everyone was sending their readers to the GoFundMe, and throughout all this good work, it seems that Dan’s final surgery may have been a success. He is no longer accepting donations, as of writing this article, and his leg may in fact be saved. So is that it? Is that all we have to say on this story, no, definitely not. In this article, I’d like to discuss why so many bodybuilders are traveling overseas, why there’s so many fake supplements throughout the world, and what can be done about it? Hopefully Dan’s will be the last case of it’s kind, but that’s highly unlikely.

There’s a number of key bodybuilders who have taken to traveling overseas. Many go to Mexico, others to South America, and a great many to southeast Asia, particularly Thailand. They go there with the hopes of starting new lives, developing fitness-related businesses, and growing the sport they know and love. Many of these folks hate censorship, they have a way of life they want to pursue freely, and they simply don’t want to compromise any aspect of it. For many, the places they go to, don’t resemble the places they’re from; however, it’s a small price to pay, to live free. I mean think about it, what greater reason is there to pick up and move around the world, than freedom?

I’m sure the food in Thailand and TJ is pretty damn good, but it can’t be any better than stateside. There’s freedom there; however, that freedom may come at a price. Whereas, supplements may be more readily available there, the quality may be suspect. Also, many countries around the world have far more powerful black markets than here in America or the West. I, personally, would never buy anything from the black market, especially not supplements, but then again, we’re all created differently. In some countries, particularly where corruption is more pronounced, black market goods may be sold alongside those from legitimate businesses. That’s frightening on many levels, particularly quality control. You’re certainly not in Kansas anymore!!

When Dan said he used bad gear and had a bad reaction, that’s actually not an isolated incident. Anyone who uses underground supplements is playing with their lives. Some argue that the current laws on the books here in America have some of the moral blame for the fact that bodybuilders are traveling throughout the world to find the supplements to build muscle. If these substances were legal, albeit controlled, quality control would be much higher and these types of freak accidents wouldn’t happen. This argument may or may not have validity, but the truth of the matter is, there are countries where pharmaceutical grade supplements can be obtained, legally, and safely. The fact that there are people out there who play Russian roulette, is entirely up to them. I’m not exactly sure what happened to Dan, why he travels the world, or even what supplement(s) he used, but if anything, this ordeal shows the very real extents to which some people are willing to go, to build a great physique and push the envelope.

The fact that when presented with a very real potential tragedy, the bodybuilding world came together and acted, is very impressive. We’ve seen this with other charities for surgeries and life-saving procedures. Although the process of eating, training, and taking supplements, may be seen as nothing but a vain attempt at obtaining perfection (by the onlookers), there’s a real community here!! During tough times, people come together!!

I pray that Dan saves his leg and that his health improves 100%. I hope you enjoyed reading this article and look forward to reading your comments, whether here at Iron Magazine or wherever you may see this article. Thanks for reading.