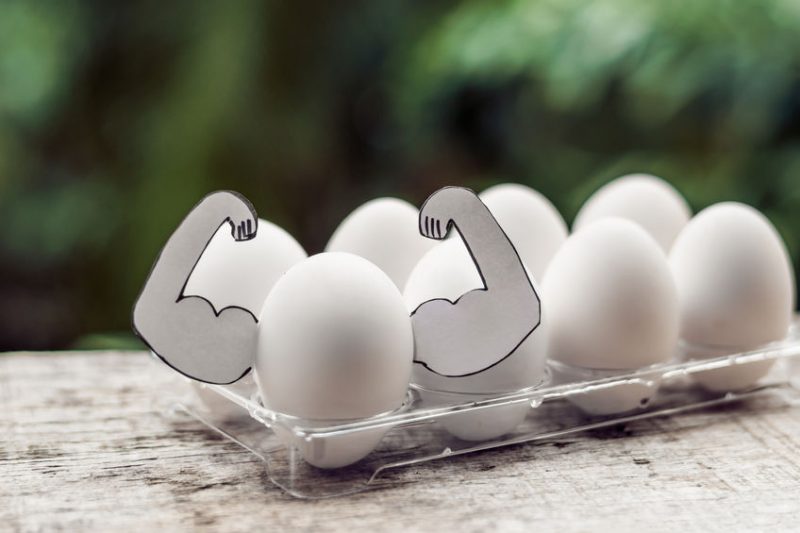 Without a doubt, eggs are one of the best protein sources you can find. I’ve done several content pieces on how great eggs are not only for your health, but for putting on quality lean muscle mass. It seems just about every year some new research comes out showing more benefits. Now, researchers are stating there’s a greater muscle-building response when individuals choose eggs post-workout – but not just any egg will do.

Know eggs-actly what you need to build muscle

If you’ve followed the timeline of research on eggs, you would know they were once touted as healthy, then demonized, then reverted back to being considered healthy.

Eggs are great! No, the fat content will slowly kill you and raise your cholesterol. No, wait! We were wrong! The fat in eggs is healthy – eat up!

Honestly, the back and forth was confusing, and to this day, many people still are unsure if they should be eating whole eggs or only egg whites in their diet. Now, new research is showing that if you opt for only egg whites, and throw away the yolk, you might be cutting yourself short on some quality muscle mass.

Researchers are now confirming that while both the yolk and the egg white itself contains protein, the yolk specifically contains some components that seems to unlock muscle growth potential much greater than egg whites alone.

Researchers gathered a small sample of individuals and had them take part in resistance training. After their workout, they were given either 18 grams of protein from egg whites or whole eggs as part of their post-workout recovery protocol. The researchers then tested the amino acid levels of the participant’s thanks to eggs that were isotopically labeled with leucine to aid in helping the researchers track exactly where the amino acids were coming from (eggs or otherwise).

One of the researchers mentioned, “By using those labeled eggs, we saw that if you ate the whole egg or the egg whites, the same amount of dietary amino acids became available in your blood. In each case, about 60 to 70 percent of the amino acids were available in the blood to build new muscle protein. That would suggest that getting one’s protein from whole eggs or just from the whites makes no difference, as the amount of dietary amino acids in the blood after eating generally gives us an indication of how potent a food source is for the muscle-building process.”

Protein in the American’s diet

While American’s have no issues hitting their daily carbohydrate numbers, protein is another story. Sure, you could use something like a protein powder, but not everyone is savvy with supplements or even wants to veer away from whole foods. For that reason, eggs are a great choice. And when considering breakfast is a carbohydrate-heavy meal for most (cereal, toast, bagels, muffins), the inclusion of whole eggs can improve the overall macros for the meal.

A researcher from the study was quoted saying, “There’s a lot of stress on protein nutrition in modern society, and research is showing that we need more protein in the diet than we once thought to maintain health. As the world’s population grows, we need cost-effective and sustainable strategies for improving the use of protein in the diet. This work is showing that consuming egg protein in its natural matrix has a much greater benefit than getting isolated protein from the same source.”

All in all, bodybuilders consume a much higher protein intake than the general population. And while many bodybuilders are already consuming enough protein in their diet, it might be a great idea to add and/or substitute some of their meals with whole eggs to enhance their muscle-building response by as much as 40 percent (when compared to eating egg whites instead).

Additionally, this is great news for many people as more and more American’s are deciding to raise their own chicken on their property, not only for the egg production, but eventually for the chicken itself. Chicken are easy to raise and manage and are a great source of food production. They can also cut down the cost of huge protein bills from grocery shopping (protein, such as beef, isn’t cheap these days).

In conclusion, this is just another awesome study showing the health and muscle-building potential from eggs. So, don’t be an egg-head, and start consuming whole eggs in your diet.