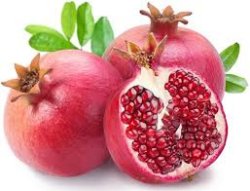 The polyphenols and nitrates in fresh pomegranate juice make it an interesting supplement for weightlifters – and probably for other strength athletes too. But they need to drink 1.5 litres a day, report Tunisian sports scientists from the University of Sfax in PLoS One.

Study
The researchers used nine experienced weightlifters as their subjects, who on two different occasions did a classic weightlifting training session of short sets with very heavy weights. Read more about the type of training they did here.

On one occasion the athletes drank 500 ml fresh pomegranate juice three times a day on the two days preceding their workout [POMj], and then 500 ml one hour before the workout. On the other occasion they used a placebo [PLA], which contained no active ingredients and no sugar, but consisted of aroma, colour and flavourings. (Indeed, the composition of placebos is not optimal.)

Results
Supplementation with pomegranate juice boosted both the maximal weight that the participants were able to use for training and their total training volume.

After drinking pomegranate juice before the workout, the weightlifters reported that their muscles were less sore two days later.

Mechanism
“Using pomegranate juice supplementation during the recovery period helps in returning the post-training session values of CK, LDH and ASAT to their baseline concentrations,” the researchers wrote. “The rates of decrease were 11.34%, 7.30% and 6.77% higher respectively for CK, LDH and ASAT, using pomegranate juice supplementation. Similarly, with the same condition, the CRP showed higher rate of decrease (5.1%) during the 48 hour period.”

Conclusion
“The present acceleration in the recovery kinetic of CK, LDH, ASAT and CRP, affirms the above-mentioned suggestion that pomegranate could be a potent anti-inflammatory and anti-damage treatment.”

How much polyphenols?
“In the present study, using natural pomegranate juice – that contains 2.56g of polyphenol in each 500 ml – showed an acceleration of muscle damage recovery following intense weightlifting training session.”