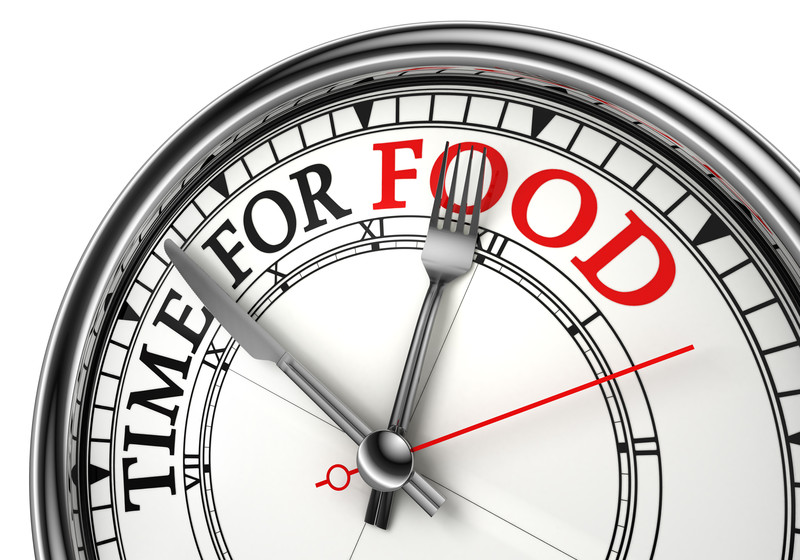 Broscience once told us that we should eat 5-7 small meals (every 2-3 hours) a day in order to help lose weight and shed body fat. Everyone was packing their Tupperware containers each morning and off to work they go with 3-4 containers full of glorious macronutrients. They found themselves eating quickly at their desk or in their car in order to consume all the meals they “needed” each day. Many found this to be a pain, yet a necessary evil in order to get the results they were told would follow. Little did they know they were simply wasting time.

Since then, that theory was debunked and research showed that meal frequency is a fallacy. Shucks. I’m sure you all enjoyed trying to fit in all those meals during your hectic day. Not. So, what’s the best way to consume meals now? Actually, new research is showing time-restricted feedings having the ability to improve weight loss results and burn fat.

Researchers conducted a first of its kind study on early time-restricted feedings. Some of you might be asking what the heck that is. To many it might sound identical to intermittent fasting where you have a feeding window. Anything outside of that window is a no-no other than water or calorie-free beverages such as black coffee. How this particular time-restricted feeding works in the study is that an individual eats their last meal mid-afternoon and then doesn’t eat again until breakfast the following morning. This strategy has been found to keep individual satiated as well as improve carbohydrate and fat burning in the body.

One researcher stated, “Eating only during a much smaller window of time than people are typically used to may help with weight loss. We found that eating between 8 am and 2 pm followed by an 18-hour daily fast kept appetite levels more even throughout the day, in comparison to eating between 8 am and 8 pm, which is what the median American does.”

To throw in a comparison, those who utilize intermittent fasting generally has a feeding window between 12pm and 8pm. This strategy allows the individual to basically eat almost up until the time they go to bed, and then figure by the time they wake up and get to work they are almost able to eat again. Most of their “fast” was done while sleeping and since they ate late, they generally wake up still satiated from their last meal.

Researchers utilized 22 participants (split evenly between 11 men and 11 women) who were slightly overweight and had them only eat between the hours of 8am and 2pm for a total of four days. This piece was specifically for the time-restricted feeding strategy. They then had the same participants eat four more days only between the hours of 8am and 8pm (a normal American feeding schedule). Both strategies were conducted by utilizing the same number of calories consumed each day to keep things standardized. Researchers then looked at how the 8am-2pm model (time-restricted feeding) fared when it came to total calories burned, total fat burned, as well as the individual’s appetite when compared to the normal American feeding schedule.

When all the data was collected after the study, researchers found that time-restricted feeding did not change the total number of calories burned each day, but what it did show was that there was an increase in fat burned as well as a reduction in hunger pangs throughout the day. Interestingly enough, it also showed that there was an improvement in metabolic flexibility. What this means is that the body was actually able to switch between burning carbohydrates and fats—essentially showing the possibility for the body to burn fat as fuel and ultimately shed body fat in the process.

More studies will need to be conducted to validate the theory that this time-restricted feeding strategy actually burns fat long-term and shows a noticeable change in composition.

Is this the “new” diet fad?

As mentioned earlier and throughout this article, this particular style of feeding is very similar to intermittent fasting which has worked extremely well for many people. This study also shows their method of eating dinner early or skipping it all together to be effective as well. Our metabolisms seem to function optimally in the morning and for that reason they worked the feedings around that time-frame.

Following the study, one researcher said, “These preliminary findings suggest for the first time in humans what we’ve seen in animal models — that the timing of eating during the day does have an impact on our metabolism. With additional research on early-time restricted feeding on humans, we can create a more complete picture of whether this innovative method can best help prevent and treat obesity.”

Being that this method is very similar to intermittent fasting, I can see why it works. Personally, I use intermittent fasting as it works extremely well with my lifestyle and work schedule. People ask all the time if you’re hungry during your fast and my answer is no. If you’re up for it, I’d definitely give it a try. I’d run it past your doctor first though to make sure it won’t interfere with any medication or health issues you may have.