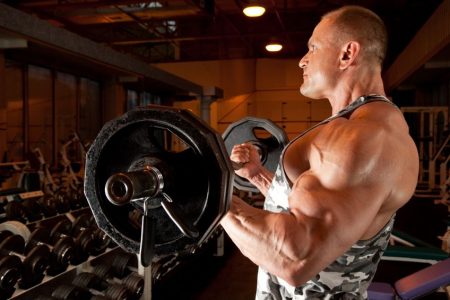 Strength athletes who use anabolic steroids rupture their tendons a whopping 9 times more often than strength athletes who stay clean, write researchers at McLean Hospital, Boston in the American Journal of Sports Medicine. Interestingly, according to the study, most tendons are not ruptured in the gym but outside it.

Study
The researchers derived information from a group of 142 bodybuilders (88 users and 54 natural athletes, who had been training for an average of 20 years) on how often they had ruptured a tendon. The participants were aged 35 to 55.

Results
Of the diehard steroids users in their fifties, 60 percent had never torn a tendon. Among the natural bodybuilders the figure was 94 percent.

The chance of rupturing a tendon is 9 times bigger among pharmacologically supported bodybuilders than among bodybuilders who stay away from chemical muscle strengtheners.

Secondly, eighty percent of the injuries occurred while they were doing another sport or at work. So most of the unlucky ones who ruptured a tendon were not training in the gym when the injury happened.

The amount of steroids the users dosed themselves up with varied a lot. The study was too small to be able to detect a relationship between the dosages and the risk of injury.

“Our findings provide persuasive evidence that the risk of tendon rupture is strikingly higher among anabolic-androgenic steroid users than among equally experienced weightlifters who have not used these drugs.”

“These findings would suggest that if a muscular man presents with a ruptured tendon, perhaps especially an upper body tendon, the clinician should strongly suspect anabolic-androgenic steroid use as a contributing factor.”

Background:
Accumulating case reports have described tendon rupture in men who use anabolic-androgenic steroids (AAS). However, no controlled study has assessed the history of tendon rupture in a large cohort of AAS users and comparison nonusers.

Methods:
Medical histories were obtained from 142 experienced male bodybuilders aged 35 to 55 years recruited in the course of 2 studies. Of these men, 88 reported at least 2 years of cumulative lifetime AAS use, and 54 reported no history of AAS use. In men reporting a history of tendon rupture, the circumstances of the injury, prodromal symptoms, concomitant drug or alcohol use, and details of current and lifetime AAS use (if applicable) were recorded. Surgical records were obtained for most participants.