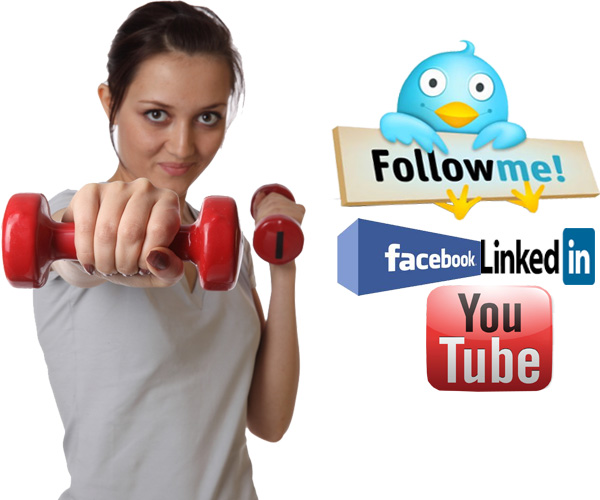 Social media can be extremely powerful for those looking to get in the best shape of their life and be healthier. However, it can also be their demise as well. We are so engaged with social media that it’s almost obsessive. People wake up and first thing they do is check Instagram or Facebook. Before they know it, more than 15 minutes has passed by and they haven’t even gotten out of bed yet. I think everyone would be blown away if the amount of time we all spent on social media was recorded and documented it every day.

I’m willing to bet some individuals spend hours scrolling through social media during the work day. We are becoming less productive thanks to platforms like Facebook, Snapchat, Instagram, and Twitter. Combining social media with your fitness can be disastrous on many levels. Not only can you be more annoying than Kim Kardashian on social, but you’ll leave the people around you giving you the stink eye. This article will go over some of the negatives of this combo. Don’t make these mistakes or your will create an epic FAIL.

1. Thanks for checking in @ the gym

I laugh every time I see someone post they are working out and then tag the location and the gym. Thanks! We all needed reassurance that you actually lift. And if you actually need to make such a post to reassure people, then you better be killing it in the gym because you probably need to be there. Don’t do it. No one cares if you’re working out—including your mom. If you look the part, it’s pretty much a given (which actually goes hand in hand with our next topic). Don’t use a social media check-in as an excuse to be lazy and simply say, “but I went to the gym.” I can’t tell you the number of people I see posting on social media that they are at the gym killing it and it just so happens that I’m there and all I see is them hitting on girls who can lift more than them. Quit fooling yourself—your physique will do all the talking for you so save your thumbs the workout.

2. Is that background from the Matrix or do you just suck at Photoshop?

It’s common knowledge that people are Photoshopping their images online these days. You can look at some shady supplement companies and easily see that their athletes are being digitally edited. One company got hit pretty hard and was exposed for basically Photoshopping all of their athletes. The one female who was a competitor all of a sudden looked insane in her photos and no one knew how she transformed herself the way she did. Then when you see her in person, she doesn’t look anything near what she did in her photos. She was exposed and became so self-conscious that she ended up getting plastic surgery to fix her “lagging” body parts. Another athlete for the same company was dumb enough to be Photoshopping himself to look super jacked in his images, and then he would shoot videos of himself. Guess what, Captain America? You can’t Photoshop yourself in video and you can clearly tell you Photoshopped around 50 pounds onto your physique in your photos.

Use this as a lesson. When you Photoshop or alter your images, there is a good chance you will get called out. It will be embarrassing. You will regret the choice you made. You will never be able to go back in time and change the decision you made, you’re stuck dealing with it. The two individuals mentioned above to this day are the laughing stock of the industry. Sure, they still have a huge following on social media, but it’s from all the people who either don’t know any better or are just a bunch of perverts.

It’s all about the Benjamin’s baby! Ok, not exactly—more like, it’s all about the likes baby! Give me a thumbs up! Tell me how good I look! If you have a fairly large following on social media, it’s pretty easy to fall into the thought process that you need to do everything possible to keep building your following and get more likes and comments about your physique. This is a downward spiral. Very few people are making a living off of using social media, and those who are making money, it’s not truly enough to live off of. Stop investing so much time into something that will give you a very limited return.

Many of these individuals are missing something in their life—self-esteem. So, they try to fill that void with likes and follows from people they don’t even know or even care to engage with. Many of these people are constantly talking about how many followers they have on their social media. That’s cool, how much money do you have in the bank thanks to your social media following? What’s that? Speak up. Oh, not a penny. Good work, Chuckles.

And ladies, ladies, ladies. Have you no self-respect? Nice work on your latest post talking about the new pants you got, meanwhile you’re taking a snap shot from above your head so everyone can check out your cleavage with the slightest glimpse of the pants you’re posting about. Is this how you value yourself? And the half-naked selfies in the bathroom? You might as well snap some photos and just send them to porn sites and magazines to post. That’s what’s going through guy’s heads anyway (both of them). I can see all the comments rolling in now from your almost nude selfies—send noodz pls. Nicely done. Momma’s so proud of you.

If you want to completely destroy your chances of hitting your health and fitness goals, then by all means follow influencers on social media who constantly show their cheat meals. It seems like every other day they are posting images of these gigantic cheat meals with pancakes, pizza, burgers, sushi, donuts, you name it. This is not real life people. If you follow what they are doing you’re going to look like a sumo wrestler. And if you aren’t lean to begin with, don’t even think about a cheat meal. Stick to your nutrition plan until you get to a comfortable weight. Walking around at 30+ percent body fat is not healthy. Show some self-control if you’re overweight and work on yourself before thinking about sitting down and slamming home a dozen buttermilk pancakes and a couple pizzas. Many times, their posts on social media are for entertainment value only. Most of them are not eating all of that food. If they are, they’re at least sharing it with someone else or planning on saving some for another day. You look at these images and either think you’re doing something wrong that you can’t eat all of that without gaining weight or you envy their “fast metabolism.”

I will say, some of those images are indeed legit. But, what you fail to realize is that for that one cheat meal, that individual was living off of chicken and broccoli just about every day for the past 6 days just to enjoy this cheat meal. Would you blame them for posting the image if you were in their shoes? I wouldn’t. But again, these individuals are not the norm, most are for entertainment purposes only.

5. Objects in the mirror are not closer than they appear

Hate to burst your bubble champ, but there are some physiques you’ll see on social media that you will never attain, it doesn’t matter how hard you work. Many of these individuals are using “enhancers” to help them achieve that look (I’m sure you can read between the lines of what I’m getting at). A good portion of these individuals are the same ones constantly saying they’re natty—as if saying it enough times will actually make it truthful. To those in the industry, we know they are lying through their teeth. Between the drugs out there and site enhancement oils, normal everyday gym rats don’t stand a chance of ever looking like those guys. And honestly, it’s not worth it in the long run anyway. They post selfies to showcase their physiques, trying to tell you that through hard work and determination, you too can look like that, and it’s all fake. I’m sure they put in the time at the gym, but what they are doing doesn’t come naturally to humans, our bodies aren’t capable of looking that way without the help of science or surgeons. So, don’t pay much attention to selfies.

In fact, the best advice I can give you is don’t post gym selfies at all. And especially don’t believe most of the physiques you see on social media. They want you to think they’re “natty bro” yet they forget to tell you all the drugs they are on to look that way behind closed doors. Ladies, you aren’t going to be left out either. All that weight you lost “naturally” thanks to product x, y, and z—it’s a scam. Unfortunately, a portion of these individuals are hiding eating disorders from their social media and are truly unhappy people. You can’t live off of celery sticks ladies, or you’ll look like one—and that’s not a good look. Don’t succumb to these pitfalls.