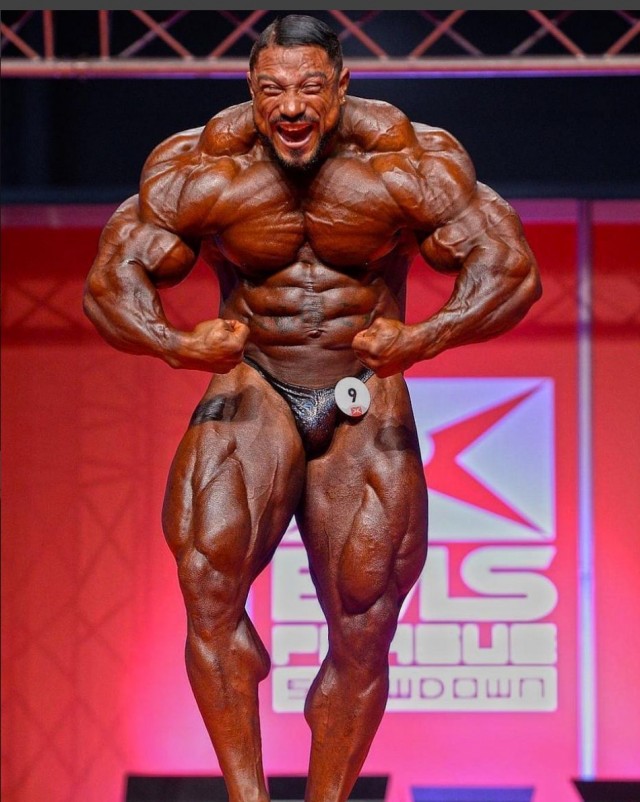 There’s a small group of elite level bodybuilders who are always discussed as being potential Mr. Olympias. Among them is, now, IFBB Pro Roelly Winklaar. Roelly took a very respectable 6th place at last year’s O, earning the support and respect of fans worldwide. In 2017, he once again took 6th, bringing a jaw-dropping level of freaky muscularity and conditioning that had him compared by fans to Big Ramy. The Dutch Beast arrived in Vegas, much under the radar. He didn’t sound off during the press conference, opting to let his physique do the talking on the stage.

The Olympia would become a huge feather in his cap, but nothing could prepare the bodybuilding world for what would happen this past weekend at the EVLS Prague Pro! At this very important European contest, Roelly would win everything, defeating 2008 Mr. Olympia and 5x Arnold Classic champion Dexter “The Blade” Jackson, who took 4th at this year’s Olympia. He’d also defeated William Bonac, who placed 3rd at the Olympia and who many fans had winning the whole contest – even surpassing Big Ramy!! Now, to be fair, both Jackson and Bonac were noticeably off, but that doesn’t matter. A win is a win. Roelly must be on top of the world right now, having earned a big $40,000 payday and enjoying the limelight that comes with being the best. This is also great news as it qualifies him for the 2018 Mr. Olympia. The question now is, what will Roelly do next? This is a man loved by the fans, liked by the press, and who has the structure necessary to be one of the best in the sport.

Roelly is at a crossroads. With a title as big as the Prague Pro, a title that will earn him unparalleled support in Europe, the Dutchman must contemplate whether or not he’ll take the full year to prepare for the Olympia – or – if he’ll try his hand at any number of smaller shows. The plus in competing often, is more income. Additionally, competing more will give him more exposure (e.g. the ability to travel, see more fans, and participate among more lineups). Many fans are dissatisfied with the status quo dealing with the Top 5 Olympians and automatic qualifications. The current model prevents people, particularly in countries outside the United States, from seeing their favorite champions compete. These folks have to settle themselves for off-season posing appearances and/or seminars. The lion’s share of fans (even in the United States) can’t afford to fly out to the Mr. Olympia, either. It’s a scary thought, but their only glimpse of the best bodybuilders on Earth, will be through webcasts. A lot of the mid-level guys, like Roelly, are rebelling against this. They want to be seen and they want to compete; however, when guys are prepping and peaking for one show per year, they have an undeniable edge over people who may be pretty close to burnt out by September.

One show that seems to be drawing out major talent is the 2018 Arnold Classic. Initially, it was selected as the contest where Dennis Wolf would be staging his comeback. Now, Big Ramy has also said he’ll do the contest. It’s quite possible that Roelly will also try. The reality of the matter is, if Roelly could beat Dexter and Bonac in Prague, he may want to try to take out Ramy in a bigger, more iconic contest. Unlike Cedric McMillan, who arguably won a weak Arnold lineup at the 2017 event, winning a stacked Arnold in 2018, could mean a press and sponsorship bonanza for Winklaar. Additionally, the Arnold (Columbus) payday is not one to readily miss out on. Assuming Roelly does the Arnold and places Top 3 or better, he would most certainly be in the running to be the next Mr. Olympia. Wait, what? Yes, you heard me right. After Phil Heath’s controversial outing at this year’s Olympia, it’s unlikely that the distended gut will be tolerated again. Big Ramy looked great, but he lacked thigh separation and could’ve been more conditioned. Big Ramy isn’t any more the perennial runner-up that Shawn Rhoden – that’s just where he happened to finish this year. The truth of the matter is that if Phil is off again and if (God forbid) the hernia surgeries aren’t a success, everything could change. If the door is left open by Phil, there’s no question who might emerge victorious.

Roelly has everything we’d like to see in a future Mr. Olympia. For starters, he’s backed by a strong sponsor. This is key, because a sponsor investing time & money into the sport, is likely to go all out, should their athlete win the biggest show on Earth! Roelly also trains at Bader Boodai’s Oxygen Gym in Kuwait. Team 02 is quickly becoming one of the most impressive squads in the world. Roelly, like his fellow teammates, are afforded the rare opportunity to eat, sleep, and breathe bodybuilding. Very few bodybuilders today, find themselves in a situation where all temptations are removed, where access to the best foods is made available to them, and where the very best in gurus work tirelessly to ensure their optimal performance.

I will never forget seeing Roelly train alongside Sibil Peters aka Granma. The fact that a little old lady could be behind one of the biggest freaks to hit the stage, seemed like a bit much to believe, but it was legit. Winklaar is a guru’s ideal client, as he has an ironclad resolve to get the job done. One of the biggest hurdles facing prep coaches today, is second-guessing by their clients. Sticking to the training, diet, and supplementation plan is what will see major results. Consistency has always been of Roelly’s best qualities. Despite being 40 yrs old, there’s no question he still has a considerable time left in his career. He’s no where near done, especially not with his new trainers, sponsor, and gym.

Even a day after the big win, the message boards haven’t skipped a beat. Everyone wants to know what’s next. I think that’s become pretty symptomatic of the current state of affairs. The fans just can’t get enough, but it’s unlikely we’ll be seeing much more from the Curacao native. I have a feeling that Winklaar will take a page from the Dorian Yates’ handbook, hunkering down in Kuwait and training hard for what’s to come. On a personal level, I’d hope he wouldn’t continue to increase size. Roelly is without a doubt a beast, he definitely brings the freak factor, but he also has crazy aesthetics, and let’s not even get started on Winklaar’s signature horseshoe triceps. I don’t know anyone with triceps like this guy and when it comes to the side tricep pose – he destroys most! That having been said, Roelly isn’t a one-pose great! Many people believe he beat Dexter at the 2016 NY Pro, but for anyone who may doubt the veracity of that claim, they need only see the recent results in Prague. Dexter is a warrior, but Roelly has proven he can best him, as well as Bonac. The question now, is can Roelly best Ramy, and of course, can he go toe to toe with 7x Mr. Olympia Phil Heath.

Only time will tell, but one thing’s for sure, Roelly has a lot on his plate right now. He will have to make some very serious decisions and stick by them. I think 2018 will be a very, very big year for him, but more importantly, what do YOU think? Please take a moment and share your thoughts, wherever you may see this article, links to it, and/or it being discussed. Thanks!