Newer PostMagic Fitness Pill in the Works?
Older PostAre IFBB Pros Really Professionals or Are They Hobbyists?
Share on FacebookShare on TwitterShare on LinkedinShare on Pinterest 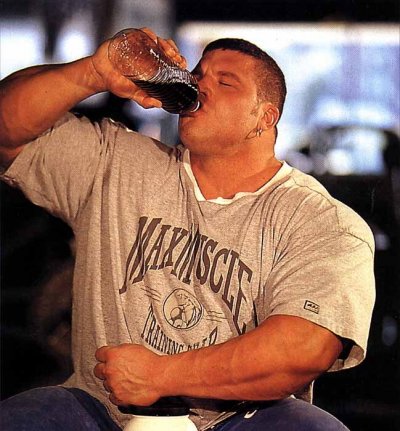 Sports drinks with fast carbohydrates that endurance athletes drink during training sessions, and also protein shakes that bodybuilders down before pumping iron, probably work better if they contain a couple of grams of L-citrulline [structural formula on the right]. Scientists at Maastricht University Medical Centre in the Netherlands discovered that L-citrulline boosts the body’s nutrient uptake during exertion.

Pre/intra/post-workout nutrition
Peri-workout-nutrition is a tried and tested performance-enhancing strategie in all areas of sport. Ingesting extra carbohydrates during a training session helps endurance athletes achieve better times, and speeds up the restoration of glycogen reserves in the muscles. Bodybuilders accumulate more muscle mass, and recover faster, if they ingest a portion of proteins or amino acids just before training.

But during intensive exertion the digestive tract becomes less active, so the uptake of amino acids and carbohydrates decreases. As a result the added value of peri-workout-nutrition is limited. For example, the optimal amount of protein that bodybuilders can take in before and after workouts is not very large: 18 g recent studies suggest. Dutch scientists reported already years ago that caffeine can have to some extent a positive effect, but little has been done with this information.

Study
The researchers in Maastricht were curious whether supplementation with L-citrulline, an amino acid that is produced when L-arginine oxidises, might improve the functioning of the small intestine during exercise. The capillaries in the intestines become narrower during exertion because the body gives priority to supplying the muscles with oxygen and nutrients. L-Citrulline converts into L-arginine in the intestines, and enzymes in the blood vessels of the gut cells can use L-arginine to produce nitrogen monoxide [NO].

Nitrogen monoxide causes blood vessels to widen, thus improving the oxygen supply to the gut cells. It also enables more nutrients to be transported from the digestive tract to the body. At least, that’s what you’d expect.

The researchers got trained endurance athletes to cycle for an hour on two different occasions. The intensity was that of 70 percent of their maximal load.

Half an hour before starting to cycle the subjects were given a placebo on one occasion and on the other 10 g L-citrulline. The researchers chose not to experiment with L-arginine, as many people get acute diarrhoea the first time they ingest 10 g L-arginine. In addition, the body breaks L-arginine down fast. 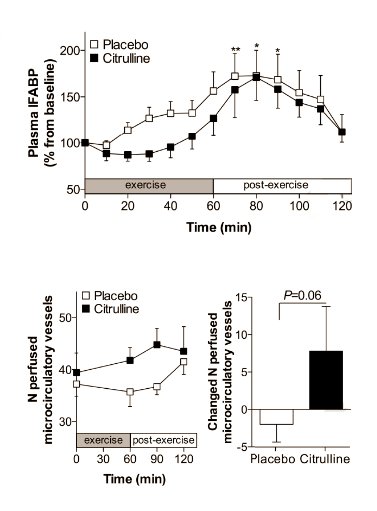 Conclusion
“The current study demonstrates that a single oral dose of L-citrulline prior to exercise preserves splanchnic perfusion and reduces intestinal injury during exercise”, the Dutch write. “The mechanism probably entails increased arginine availability for NO-mediated vasodilatation. These data suggest oral L-citrulline supplementation to be a promising strategy to improve gastrointestinal blood flow and prevent intestinal injury in athletes without adverse gastrointestinal effects as observed for arginine.”