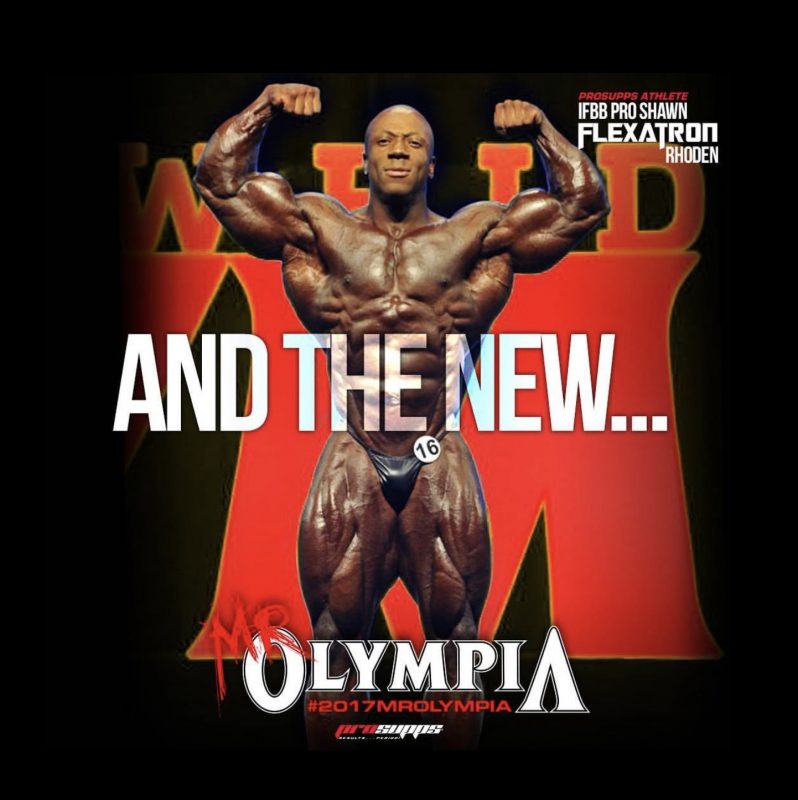 Phil Heath has won six consecutive Mr. Olympia titles and is considered by many to be able to break all existing records. I don’t have an issue with that. I first met Phil in 2007 in Kalamazoo, MI, shortly after defeating Gustavo Badell at the Ironman Pro. I congratulated him, chatted a bit, and then he was nice enough to take a photo with me. Phil has been very nice over the years, taking photos with me at the NPC Natural Ohio and the Arnold Classic. I’ve always defended him, sang his praises, and even written supportive articles (e.g. on Rx Muscle, Strength Addicts).

That being said, I don’t consider Phil to be one of the best Mr. Olympias of all time, but he’s good enough to win decisively against all [current] challengers. I believe Kai Greene has come the closest to defeating him, but I also see both Dexter Jackson and Shawn Rhoden as very viable threats. I put both Shawn & Dexter above any other challengers for the title; however, when it comes to Flexatron, most media outlets, writers, and even fans, have undercut his chances, despite his very impressive contest record, classic physique, and flawless posing abilities. Last year, Rhoden placed 2nd, and this year, his sponsor, ProSupps, has launched a series of ads that I felt were very newsworthy and reported them on my show, No Bull Weekly, available exclusively at Muscular Development, sponsored by IronMag Labs

Although there’s a long history of feuding between Phil Heath & Kai Greene, the single biggest issue seems to have been Kai Greene signing as Mr. Olympia during the 2014 event. Greene’s signing Olympia posters as the next champion during that year’s event, prompted Heath to publicly call Greene out during the press conference. It seemed that this rather trivial act, deeply offended the reigning champ. Today, with Kai Greene seemingly uninterested in signing an Olympia contract, ProSupps released a series of advertisements in which Shawn Rhoden appears to be the next Mr. Olympia. I found this to be extremely newsworthy and reported on it for MD No Bull Weekly. 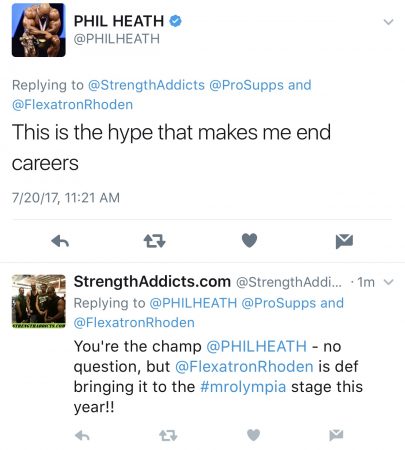 The day my episode was released, I blasted it on a number of facebook groups, as I often do, using my best efforts to promote the content, doing right by Muscular Development and IronMagLabs. In addition to Facebook, I posted on Instagram, prompting Heath to block me there, as well as posting on Twitter. The champ tweeted back to me (along with Rhoden & Pro Supps), stating “this was the kind of hype” that led him to “end careers.” What exactly he meant by that, remains unclear. The following day, I put up a reaction video to Heath blocking me on Instagram, resulting in him blocking me on Twitter.

Instead of Phil having some fun with the ProSupps ads or addressing me as a reporter, he opted to block me and make a pretty silly threat at Rhoden. What kind of a champion blocks reporters who report news? I never said Shawn would be the next Mr. Olympia or that Phil would or wouldn’t be; I simply reported on the news. This is something previous champions like Jay Cutler, Ronnie Coleman, Dorian Yates or Lee Haney would never have done – at least I wouldn’t think so. How can a Mr. Olympia be a true ambassador of bodybuilding to the world, if he blocks those who question him or report news he doesn’t like?

But there’s something about Rhoden, in particular, that may speak more to Phil’s reaction. Any man who’s earned two 3rd places and finished as high as 2nd, is very dangerous. Dexter Jackson has been a Mr. Olympia and won the Arnold Classic 5x, but if Dexter hasn’t defeated Phil thus far, I doubt he ever will. He’s basically serving as a buffer. He’s got the name, cred, and most importantly, the physique to comfortably hold off The Big Ramy’s and company; however, Shawn Rhoden at 42 could be a lot more trouble than Jackson at 47 for Phil Heath. In 2013, Rhoden took 4th. In 2014 & 2015, Rhoden took two consecutive 3rd places. In 2016, Rhoden committed himself entirely to the Olympia (as in 2015), reaching 2nd place. Rhoden’s ascent is nothing short of amazing and as Phil now looks to tie Arnold’s record, with both Lee Haney’s & Ronnie’s in sight, things could go wrong. It’s very difficult to nail a prep & conditioning 5, 6, and now 7 times straight (even if peaking just once a year). If Rhoden comes in 100% and Phil is even slightly off, he may find himself in 2nd place – his perfect streak, not to mention quite possibly his spirits – broken. 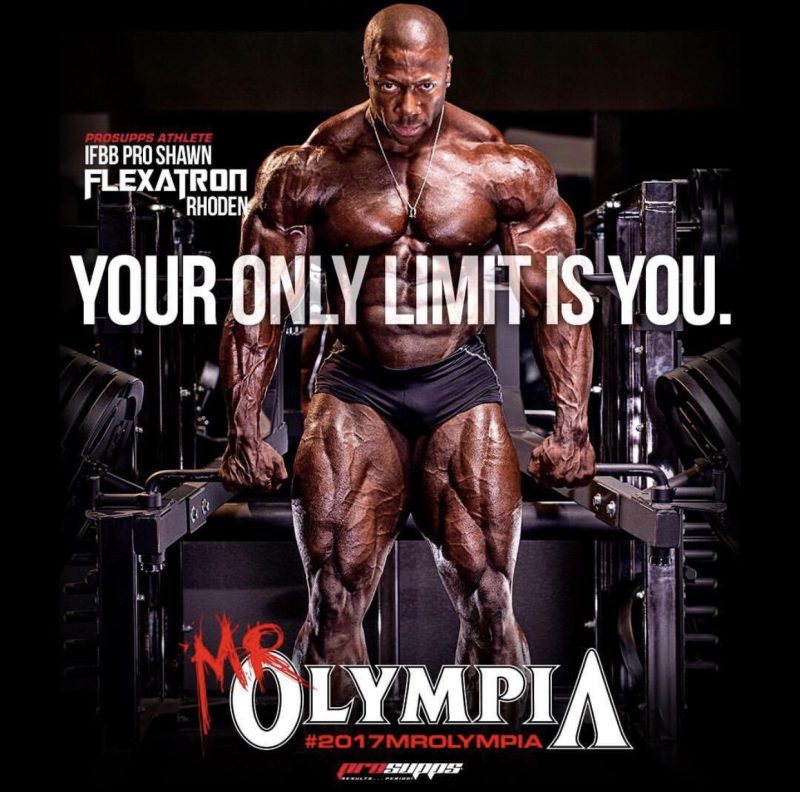 It’s late July. The building is over. Now it’s prep time. The stakes are getting higher. Psychologically, Phil has never been challenged like this before. ProSupps isn’t backing down; their support for Rhoden is unquestioned. While Phil is the first Mr. Olympia to have come to greatness entirely in the age of social media, he may also be the first to be challenged through the same platforms that catapulted him to super stardom – Instagram, Twitter, Facebook & YouTube. These ads are nothing more than a company hyping their athlete, giving him 100% support, and pushing him hard like a sponsor should. Heath is no longer with Ultimate Nutrition, for whatever reason, and the supplement line bearing his name seems to have disappeared. The truth of the matter is that Phil tweeting me, Pro Supps, & Shawn Rhoden may show a person who’s insecure. The fact he went on to blocking me on not one, but two separate social media platforms, suggests Heath may either be insecure or simply unwilling to accept any criticism or challenge. If we’re dealing with the former, then it’s a bad mindset for such a subjective sport; if we’re dealing with the latter, then Phil makes for a pretty lousy bodybuilding ambassador to the world.

The Mr. Olympia has been rightfully called, “The Superbowl of Bodybuilding.” In addition to the actual competition on stage, there’s an undeniable entertainment value that goes with it. Fans don’t just go to see 15-17 guys flex on stage. Bodybuilding has always been more than that. Fans identify with athletes, with their journeys, and their outlooks. Phil won’t go down in history for being an exciting champion. Kai Greene brought entertainment value, in addition to a solid physique. The same could be said about Dennis Wolf. There’s nothing very exciting about Phil. Dexter, despite a social media makeover, remains somewhat dull (in terms of entertainment value). The ProSupps ads are creating some fun, a showdown if you will, that’s warranted given how last year’s Mr. Olympia was decided. Phil could’ve had some fun with these ads. Instead, he’s become incredibly defensive and some might argue, hostile.

In any event, the truth is, I like Phil and I still consider him to be a great champion, but just like ANY Olympia-qualified competitor could be the next Mr. Olympia, there’s no harm in last year’s runner-up (or his sponsor) employing a little wishful thinking in marketing. The future doesn’t belong to anyone. The same way Ronnie won eight straight, he lost on his ninth attempt, because no year is a guaranteed win. Just because The Big Nasty won eight, any man competing in 2006 could have said he’d win, most especially the guy who took four 2nd places to Coleman, one, Jay Cutler. When Jay told Triple H he’d win during an interview at the 2004 Olympia, Ronnie didn’t cry about it later, instead, he used the opportunity to one-up Jay, suggesting Cutler was smoking crack. It was hilarious. No one took it personally, because bodybuilding back then – was a lot more fun, because the titleholder was so secure in himself and his physique that he didn’t care who claimed they’d beat him. To Ronnie, it just amounted to talk.

To put things into context, I’d like to quote my good friend, IFBB Men’s Physique Pro George Brown, who assessed the situation quite brilliantly, referring to Heath, he stated “I mean what’s he expect people to do, bow down? Please, not in this lifetime.” If anyone can lay claim to the Sandow, it’s the #1 challenger from 2016, but more importantly, it should extend to every man who’s earned the right to be on that stage.

No one is going to Las Vegas to place 2nd – 15th. Anyone could be the next Mr. Olympia.