Newer PostRemorse from Toney Freeman or is Leaving NSL His Curtain Call?
Older PostA Workout to Manage Diabetes
Share on FacebookShare on TwitterShare on LinkedinShare on Pinterest 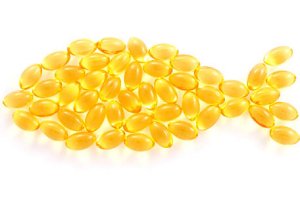 A modest dose of one gram of fish oil per day lowers cortisol levels, write Italian researchers in Molecular Nutrition & Food Research. The participants in the study were alcohol addicts who were doing a detox, but the cortisol lowering effect of fish oil is no different in healthy people.

Alcohol, cortisol & stress
If alcohol addicts stop drinking their cortisol level rises. [Am J Psychiatry. 1991 Aug;148(8):1023-5.] The effect is temporary, but the accompany feelings of stress and anxiety play a role in the failure of many attempts to stop drinking.

Study
The Italians did an experiment with 31 alcoholics who were trying to detox under guidance. Ten of them were given a placebo every day for 21 days; the remaining 21 subjects were given a capsule containing 1000 mg fish oil.

Each capsule contained 252 mg DHA and 60 mg EPA. The researchers used supplements made by the Italian company Salix. [salix.it]

Results
Just before administration of the fish oil or placebo capsules started [t0], the researchers monitored the subjects’ cortisol concentrations in their saliva for twenty-four hours. They did the same on the last day of administration [t21].

The first figure below shows that the omega-3 fatty acids lowered the subjects’ cortisol concentrations. The second figure shows that the placebo capsules had no effect.

Fish oil supplementation also reduced the feelings of stress that the subjects reported. The researchers used the Perceived Stress Scale [PSS10], where the maximum score is 40 and the lowest 0.

Conclusion
“Present results show that supplementing male abstinent alcoholics with omega-3 fatty acids: (1) decreases stress and anxiety symptoms and (2) reduces basal cortisol secretion levels”, the researchers summarised. “The application to a relatively unselected cohort of abstinent alcoholics, together with the broad availability of omega-3 supplements, makes these results quite generalizable, and the present experience replicable in most realities.”

“Collectively, these findings suggest that an elevated dietary omega-3 fatty acids intake may represent a subsidiary measure to increase the efficacy of rehabilitation programmes in alcohol dependent persons and provide a valid support during withdrawal from alcohol.”

Behavioral distress and dysfunctions of hypothalamic-pituitary-adrenocortical (HPA) axis play a central role in alcohol abuse. Omega-3 fatty acids are proposed as having antistress, regulatory effects on HPA responsiveness, but a possible protective role in ethanol addiction is unexplored.A randomized, doubleblind, placebo-controlled trial was performed in male alcoholics undergoing residential rehabilitation program, to evaluate the effects of 3-week supplementation with fish-oil providing eicosapentaenoic (60 mg/day) and docosahexaenoic acid (252 mg/day) on perceived stress/anxiety and HPA activity, assessed by measuring saliva basal cortisol levels at various daytimes (0730 h, 1130 h, 1600 h, 2000 h, and 2400 h) and the acute cortisol response to Trier Social Stress Test.Results showed that in supplemented subjects, before versus after decrease of stress/anxiety ratings was accompanied by reduction of cortisol basal levels throughout the day; no changes were observed in placebo group. At the end of intervention, amplitude, and duration of stress-evoked cortisol response did not differ between groups; however, the peak of cortisol response was temporally anticipated in supplemented subjects. In conclusion, an elevated omega-3 intake may reduce distress symptoms and basal cortisol secretion in abstinent alcoholics, thus providing a valid subsidiary measure to increase the efficacy of rehabilitation programs in ethanol addicts.