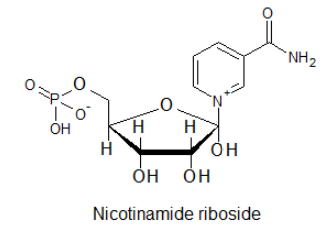 On boards and forums you can read posts by bodybuilders and fitness fanatics who experiment with daily doses of 500 mg nicotinamide riboside. It’s the over 40s who report spectacular results: their post-training recovery is faster. It seems the supplementation rejuvenates their muscles, they write. And now there’s an animal study, published by Swiss researchers in Science, that suggests this may well happen.

Nicotinamide riboside is an analogue of vitamin B3 and it helps crucial enzymes to function in cells. It’s a precursor of the enzyme NAD+. Because a) the NAD+ concentration decreases in cells as we age and b) the enzymes that need NAD+ are involved in repair processes of the mitochondria, nicotinamide riboside is an interesting anti-aging substance.

The mice in the control groups were not given nicotinamide-riboside [CD].

The figure below explains how nicotinamide riboside extends life expectancy and rejuvenates muscles. At cell level, supplementation increases the activity of the gene that codes, among other things, for ATP-dependent Clp protease proteolytic subunit [CLPP] [Spatial formula shown to the right].

CLPP repairs broken proteins in the mitochondria. By the way, CLPP needs magnesium and ATP to function. So it may be the case that nicotinamide riboside supplementation works even better when combined with magnesium and creatine, we suspect.

The researchers note that the effect on the genes that code for prohibitins [PHB and PHB2] is particularly interesting. Prohibitins are enzymes that cells use to request the mitochondria to perform repairs.

Conclusion
“Our results demonstrate that the depression of prohibitin signaling, leading to mitochondrial dysfunction, can be reversed in aging using a nutritional intervention to boost NAD+ concentrations in stem cells, and suggest that NAD+ repletion may be revealed as an attractive strategy for improving mammalian lifespan”, the researchers wrote.

A dietary supplement protects aging muscle
The oxidized form of cellular nicotinamide adenine dinucleotide (NAD+) is critical for mitochondrial function, and its supplementation can lead to increased longevity. Zhang et al. found that feeding the NAD+ precursor nicotinamide riboside (NR) to aging mice protected them from muscle degeneration (see the Perspective by Guarente). NR treatment enhanced muscle function and also protected mice from the loss of muscle stem cells. The treatment was similarly protective of neural and melanocyte stem cells, which may have contributed to the extended life span of the NR-treated animals.

Abstract
Adult stem cells (SCs) are essential for tissue maintenance and regeneration yet are susceptible to senescence during aging. We demonstrate the importance of the amount of the oxidized form of cellular nicotinamide adenine dinucleotide (NAD+) and its effect on mitochondrial activity as a pivotal switch to modulate muscle SC (MuSC) senescence. Treatment with the NAD+ precursor nicotinamide riboside (NR) induced the mitochondrial unfolded protein response and synthesis of prohibitin proteins, and this rejuvenated MuSCs in aged mice. NR also prevented MuSC senescence in the mdx (C57BL/10ScSn-Dmdmdx/J) mouse model of muscular dystrophy. We furthermore demonstrate that NR delays senescence of neural SCs and melanocyte SCs and increases mouse life span. Strategies that conserve cellular NAD+ may reprogram dysfunctional SCs and improve life span in mammals.

Newer Post
The Evolution of PED’s in Bodybuilding
Older Post
When Will Health Be More Important Than Money?