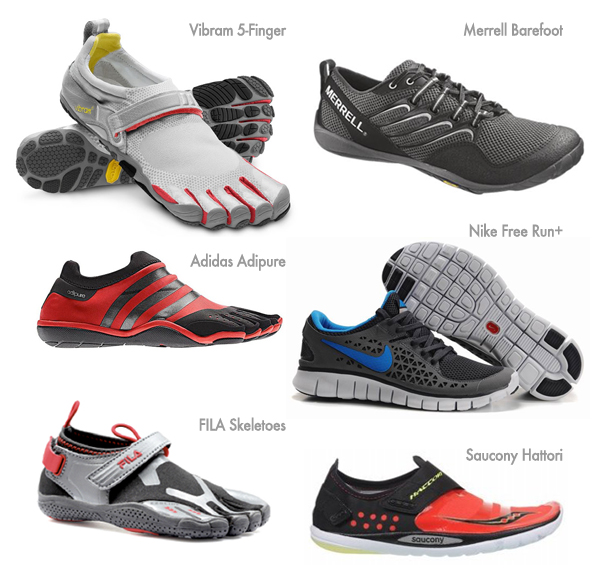 Those funny little minimalist “toe-shoes” have been popping up all over the place with the headliner seeming to be the brand Vibram. Some people swear by them, others swear you’ll never see them on their feet. Either way you shake it, minimalist shoes now have a new study backing them. So while all the naysayers are out there making fun of minimalist style shoes with zero heel-to-toe drop, they may be the ones being left in the dust of those rocking them.

For this experiment, the researchers randomly chose 20 runners to start training with minimalist style shoes. The minimalist style shoes were ones containing individual compartments for each toe rather than a normal toe box. In addition to being given the minimalist shoes, they were also given an exercise program to help with their transition from the traditional style shoes to the minimalist as well as a program to help with their balance. The remaining 18 runners were to continue using their traditional running shoes and were also given the exact same strengthening and balance program to follow. Each group was to follow the program for a period of six months.

Prior to the study, each of the runners went into the facility to have a magnetic resonance imaging (MRI) on their right leg and foot to get baseline muscle volume values. After six months of the program the researchers again ran a MRI on the same right leg and foot of the 38 runners for a comparison. What they found was that the extrinsic foot muscles which run from the leg to the foot increased in volume in those who wore the minimalist running shoes by 7.05%. Likewise, the intrinsic foot muscles which run from the heel to the toes also increased in volume by 8.8% when compared to the runners who wore the traditional running shoes. In fact, there was no change at all in foot muscle volume in the group of runners who wore traditional running shoes.

When diving into the results, the researchers concluded that due to the minimalist running shoes not providing any type of cushioning and support, that the extrinsic and intrinsic foot muscles needed to support the arches of the feet. In addition, the additional forces used during the running motion with a zero-drop shoe would involve more recruitment of the calf and lower leg muscles, hence the increase in volume for those individual muscles as well.

Researchers are proposing that minimalist style running shoes be used as a potential rehabilitation program for those who have foot injuries. Rather than using an orthotic like so many doctors prescribe, utilizing a minimalist shoe might remedy the issue versus just throwing a bandaid over the issue and trying to alleviate the pain associated with many foot injuries and problems. If someone is found to have weak foot muscles, these findings show that they could be able to strengthen those foot muscles and increase the muscle volume through the use of minimalist running shoes and potentially fix any imbalances they have with their foot muscles.