Lose weight faster: skip breakfast and jog for an hour 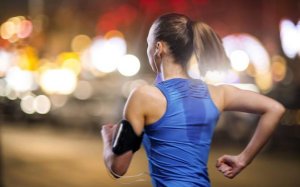 Miss breakfast and go jogging for an hour in the morning. The calories you miss out on at breakfast you won’t consume later in the day. On the contrary: as a result of the combination of physical exertion and missing breakfast you’ll consume less throughout the day than you would have if you had eaten breakfast. American sports scientist Jessica Bachman, of the University of Scranton, wrote about this in the Journal of Nutrition and Metabolism.

Study
The researchers performed an experiment with 12 male runners, aged 18-30, who they got to run on two separate occasions on a treadmill in the morning for 60 minutes at 60 percent of their maximal oxygen uptake. If you’re fit that’s the intensity at which you can just continue a conversation and at which your fat burning is optimal.

Results
When the participants skipped breakfast they did not make up for the missed calories later in the day. What’s more: they even ate less after lunch than they did when they had had breakfast.

By the way, there was one participant who did not follow this pattern, as the figure above shows.

The participants burned an average of 900 kilocalories while running. It made no difference whether they had eaten breakfast or not. But the participants who had not had breakfast burned significantly more fat when running.

Conclusion
“With a growing interest in exercising in a state of reduced carbohydrate availability – ‘training low’ – it is important to discover the effects these protocols may have on a variety of physiologic markers,” the researchers wrote. “Previous research on training low has found some beneficial improvements in markers that could potentially lead to improvements in athletic performance.”

“Training low can be achieved through a variety of techniques, one of which is exercising in a fasted state.”

“Only one study has examined the effect of fasting prior to exercise on energy intake. [Br J Nutr. 2013 Aug;110(4):721-32.] This study found that fasting had no effect on energy intake immediately after exercise.”

“The current study also found no effect of fasting on energy intake immediately after exercise but did find suppression in energy intake at the meals and snacks later on in the day.”

“The combination of skipping breakfast and exercising in the fasted state may have an additive effect on suppressing energy intake hours after exercise is completed. It is currently unknown if following this type of protocol over a prolonged period of time could have implications for weight management.”

The effect of fasting prior to morning exercise on 24-hour energy intake was examined using a randomized, counterbalanced design. Participants (12 active, white males, years old, :    mL/kg/min) fasted (NoBK) or received breakfast (BK) and then ran for 60 minutes at 60%  . All food was weighed and measured for 24 hours. Measures of blood glucose and hunger were collected at 5 time points. Respiratory quotient (RQ) was measured during exercise. Generalized linear mixed models and paired sample -tests examined differences between the conditions. Total 24-hour (BK:  kJ versus NoBK:  kJ; ) and evening (BK:  kJ versus NoBK: ; ) energy intake and RQ (BK: versus NoBK: ; ) were significantly higher in BK than NoBK. Blood glucose was significantly higher in BK than NoBK before exercise ( versus  mmol/L; ). Hunger was significantly lower for BK than NoBK before exercise, after exercise, and before lunch. Blood glucose and hunger were not associated with energy intake. Fasting before morning exercise decreased 24-hour energy intake and increased fat oxidation during exercise. Completing exercise in the morning in the fasted state may have implications for weight management.

Newer Post
Be Comfortable in Your Own Skin
Older Post
Want to Stay Fit? Then Skip Getting Married!