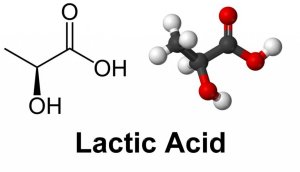 During interval training and high-reps strength training, the muscles release large amounts of lactic acid into the blood stream. The lactic acid may well protect cells against aggressive molecules, and it helps cells to function better and delays processes of aging. Researchers at the University of Tokyo drew this conclusion from experiments they did with mice.

Study
The researchers gave mice 1 g sodium lactate per kg bodyweight, administering it into their small intestine. Three hours later they looked to see whether the genes in the animals’ calf muscles had started to work differently. The figure below shows that the lactic acid had already disappeared from the bloodstream.

Results
The researchers discovered that the lactic acid had made the gene Pgc-1-alpha work harder. The protein synthesised by this gene plays a key role in the production of mitochondria. These are the cells’ power generators, which convert nutrients from food into energy.

The Mt1 and Mt2 genes code for the enzymes metallothionein-1 and -2, which play a role in protecting cells against aggressive compounds.

Conclusion
Good, the Japanese only describe the effect of lactic acid on the muscles in their article. But they do write that they suspect that lactic acid, normally produced by the muscles during intensive exercise, is also active in other parts of the body.

“Our results suggest that lactate, which is well known to be increased during exercise, also acts as a signal for upregulating genes related to mitochondrial function,” the researchers conclude.

To examine the potential role of lactate as a signalling molecule in skeletal muscle, we performed global gene expression analysis of the mouse gastrocnemius muscle, 3 h after lactate administration using the Affymetrix GeneChip system (Affymetrix, Santa Clara, Calif., USA). Among the top 15 genes with the largest fold change, increased expression of Ppargc1a, Pdk4, and Ucp3 was confirmed using real-time quantitative polymerase chain reaction. Our findings suggest that lactate serves as a signal for upregulating genes related to mitochondrial function.