Knee Rehab That NASA Would Approve Of 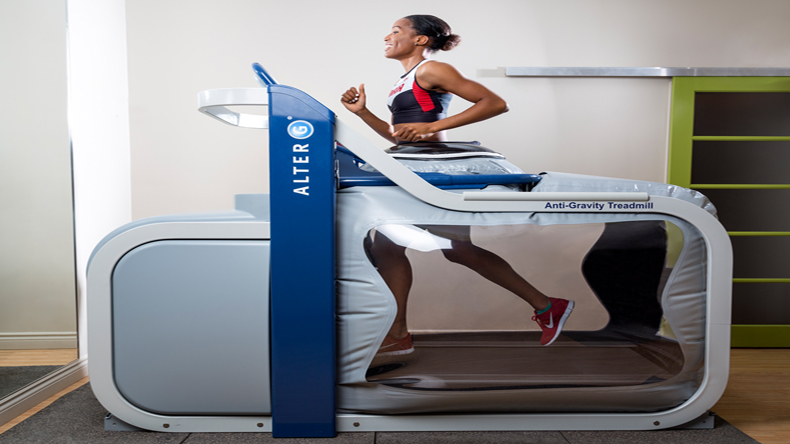 For those of you who are athletes or even everyday gym-goers, knee health is extremely important. You don’t realize how much we take our joints for granted until they become injured. And generally, if surgery is involved, recovery time can be four to six weeks for a meniscus surgery with an even longer period until you are back to full strength. Or if a knee replacement, you’ll be out a good three months and then another six months to a year until you’re back to full strength. Now, researchers are trying to cut back the recovery time with the use of anti-gravity treadmills.

The pain associated with not only a knee injury, but also the rehabilitation process is enough to have any normal person or elite athlete “baby” their surgically repaired joint. For many, they have reservations about pushing their body to the limit again whether it’s on the playing field or in the gym in fear of reinjuring it. For that reason, researchers have designed a futuristic space-age anti-gravity treadmill to allow people the ability bridge the gap and ease their way back into pushing themselves again. For some, it can be more of a mental battle than a physical. Researchers want to ensure that patients can slowly work their way back into a normal running or walking gait quickly by removing the additional forces put on the knee. This will not only help retrain the body of the motions involved, but also help cross the mental barrier that might have been put up after the injury.

With the ability to change the air pressure in the anti-gravity treadmill, the user is able to adjust how much of their body weight they want reduced. The treadmill is able to go from allowing the full weight of the user to be used on the treadmill (like what you’d experience in a gym), to only having 20 percent of the user’s weight acting upon the treadmill, cutting out 80 percent of the weight which would allow the user to run basically as if they were on the moon or in space. This severely reduces the pressure and force put on the knee by cutting back on the impact felt through the running motion when the foot strikes the ground and force is transferred between the upper and lower leg.

Some patients following their rehabilitation feel great walking, but the thought of exerting higher forces on the knee prevents them from testing the waters. When we run, we are actually exerting forces up to five times greater on our knees than we do when walking. Being that mentally we are aware of that extra force, the anti-gravity treadmill helps those rehabilitating feel confident and believe that they can get back to their normal pain-free running gait once again.

Researchers mentioned that in a study using a 39-year-old female endurance runner, they found that through the use of the anti-gravity treadmill, that they were able to rehabilitate her back to full running strength in eight weeks following knee surgery. This drastically reduced the rehabilitation process, allowing her to get back to her everyday life and running.

Will this be something that we will see here in the states more? Possibly. Right now, aquatic underwater treadmills are being used for a similar purpose because the water reduces the amount of force put on the knee itself while the water also creates some resistance to help strengthen the leg muscles.

The anti-gravity treadmill, I feel, is something that many people can benefit from—especially if the rehabilitation facility does not have a pool on site. The amazing thing is that technology is changing every day—for the better. Recovery time is being cut down, patients are regaining their strength faster and getting back to work and play faster than ever. We take the little things in life for granted—especially when it comes to our health and our bodies. Luckily there are people out there thinking about the “what if’s” that could sideline us for a period of time and helping figure out how to get us back to normal in the least amount of time possible.