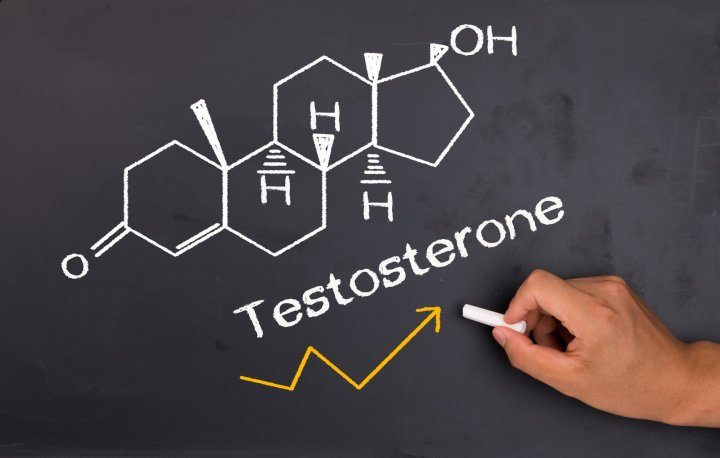 Its well known that a common side effect associated with anabolic steroid use is the inhibition of natural testosterone production. The body monitors testosterone levels and adjusts production of the hormone within the testes by altering output stimulatory hormones released from the hypothalamus and pituitary glands. If circulating testosterone concentration is low, the hypothalamus detects this and signals the pituitary to release a hormone that stimulates the testes called lutenizing hormone (LH). LH makes its journey through the blood to the testes, which then increases output of testosterone production.

When testosterone concentration rises in the blood, the hypothalamus detects this and reduces the pituitary’s demand. When anabolic steroids are used, the circulating androgen levels are much higher than the cutoff, and the testes stop functioning to produce testosterone as they do not receive a LH signal from the pituitary. When the steroid cycle is finished, close attention needs to be paid to promoting the restoration of natural testosterone production, and this includes avoiding commonly used and overlooked testosterone inhibitors. During post-cycle therapy the focus is generally on what compounds should be taken, such as HCG, Nolvadex, etc, and there is usually little regard for what could negate the process of returning natural testosterone production back to normal.

The starting chemical for natural testosterone production appears to be acetyl-CoA, which is produced as glucose and burned for energy. Acetyl-CoA goes through a series of reactions to become a molecule called HMG-CoA. HMG-CoA is then used to form squalene. A key reaction responsible for changing HMG-CoA is called the rate limiting step. This step limits how fast this whole process can take place. The top-selling cholesterol lowering drugs called statins work by making this rate limiting reaction move even slower. Ok, back to the process, which is now slowed down if Lipitor or other statins are taken. Squalene is converted to a primitive steroid called lanosterol. Lanosterol is then processed to form cholesterol. Cholesterol can now be processed to form other steroid hormones such as: testosterone, estradiol, DHEA, androstenedione, progesterone, and cortisol. This is a brief description on how the body makes testosterone. Its a complicated task, and if any of the given processes is interrupted, the recovery of this hormone, especially after a steroid cycle, could be limited.

The reactions that are responsible creating testosterone require a great deal of energy. These processes are also mostly oxidative reactions. Oxidative has become a feared word in regard to health, and this has resulted in the high consumption of antioxidants. Antioxidants suppress oxidative reactions, you know, the ones that are required to manufacture testosterone within the body. Antioxidants do have their benefits, as they do fight off free radicals, which can cause damage in structural proteins and DNA. But as with most things, too much of a good thing, can actually be a bad thing.

Green tea is full of antioxidants, leading to the claims about promoting health and prolonged life. But remember that testosterone production is dependent upon those oxidative reactions. Green tea has been shown to inhibit certain effects of testosterone by inhibiting the conversion of testosterone to the potent androgen DHT. It may also affect the enzyme that converts testosterone to estrogen. Some studies show this enzyme as being increased and other show it being decreased. Rats treated with green tea showed a much lower response to HCG, a hormone used to stimulate testosterone. When the tissue cultures were treated with androstenedione, the steroid that comes right before testosterone in the production sequence, normal response to HCG were seen. This shows that the inhibition of green tea occurs early in the steroid production chain, and it may affect other steroid classes.

Like green tea, soy is another staple that’s entered Western society. It has found its way into a variety of food products, including some protein powders and ready-to-drink shakes. The cost of soy is less than a third of whey and milk protein products. This makes this an attractive protein source for some companies. Its also used to attract female customers, as the isoflavones found in soy have estrogenic support properties. Soy intake has also been shown to decrease testosterone. Its not clear whether this is a result of the elevated estrogen, or if soy affects testosterone from a completely different angle. At this time, research on this is conflicting. I still recommend that men check the labels of of their products to make sure soy is not an ingredient. This is even more important if natural testosterone levels are trying to be restored.

Another inhibitor of testosterone production are a number of prescription medications. This side-effect is known by prescribing doctors, but yet, it is extremely rare for testosterone levels to be checked while the drugs are taken. A drop in testosterone is a side effect of the prescription medication Ketoconazole. It is used to treat skin infections caused by fungi or yeast, such as athletes foot or seborrheic dermatitis. This medication is only intended to be used short term, so blood work to monitor hormone levels would be pointless. On the other hand, Cimetidine (Tagamet) is often prescribed to people with ulcers or gastro esophageal reflux disease. Its available in pill and liquid form and an over-the-counter version is available to treat heartburn. This is a medication that could be taken for years, or maybe even decades, without knowing its sending testosterone levels into lower than normal ranges. Other prescription medications that can lead to lowered testosterone are: Spironolactone, certain antidepressants, chemotherapy drugs, and opioids like morphine, codeine, hydrocodone, and oxycodone. While these medications are all designed to treat medical conditions, they can create another one by lowering testosterone. These medications could all negate an attempt to restore natural testosterone production.

While we’ve looked at what can have a negative impact on testosterone recovery, I thought I’d cover what can be done additionally to the standard PCT protocol to help push T-Levels back to a normal range. The foods that we eat can have an impact on natural testosterone production. Foods that promote testosterone production primarily offer metalloproteins and metalloenzymes involved in the chemical reactions to create cholesterol and then testosterone. Also, B vitamins play a helping role, and total calories and protein quality are also important. The most commonly referred foods that promote testosterone production are eggs, beef, garlic, and broccoli. These foods are high in zinc, cholesterol, B vitamins, and arachidonic acid. The body needs to know that the environment is safe for adding energy demanding muscle. This includes consuming sufficient calories to avoid muscle wasting, eating a quality diet including animal based protein, focusing on foods that are high in zinc and B vitamins.

Restoring natural testosterone production after an anabolic steroid cycle can seem like an uphill battle. This battle is much easier won by avoiding inhibitors of testosterone production such as certain prescription medications (consult with your physician before stopping or changing any medications), green tea, soy, and high levels of antioxidants. If this is done, the transition from chemically enhanced back to natural should be a smooth one.