Newer Post3D Printed Supplements: Could This Be the Future of Bodybuilding?
Older PostSteroids users nine times more likely to rupture tendons
Share on FacebookShare on TwitterShare on LinkedinShare on Pinterest 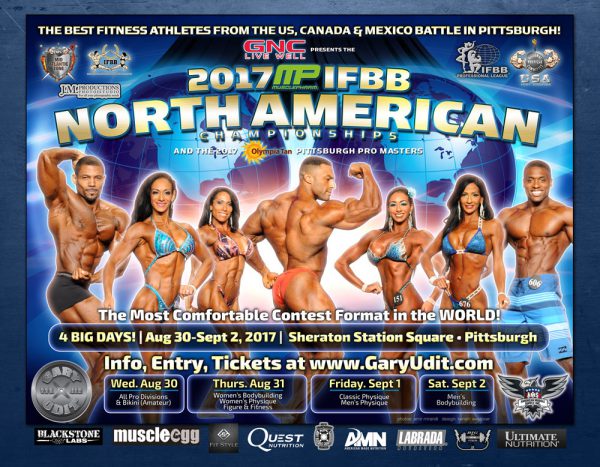 There’s one competition that brings the best amateur athletes in three countries together. There’s one competition, where Americans, Mexicans, & Canadians, all battle on one stage. Unlike, the NPC Nationals and USA’s, the show I’m talking about carries strong international significance, producing some of the greatest champions in the IFBB – historically, contemporarily, and into the future. The competition I’m speaking of, is Gary Udit’s IFBB North American Championships – a 4 day event, held in Pittsburgh, PA, that’s said to have over 1,200 competitors as of the last count! Why is this show so special? In this article, I’d like to discuss the very important role this competition plays in providing opportunities to athletes, growing the sport, and expanding fan and business horizons in the fitness industry.

Athletes in smaller countries don’t have the same resources as we do, here in the United States. In terms of bodybuilding, Mexico is a powerhouse; however, and with all due respect, I don’t think the same could be said about Canada. This is a bit of an irony, considering that by landmass Canada is second only to Russia in size. Population-wise, however, our northern neighbor has about 10% the people we do and the very far distances its athletes must travel, makes it considerably more difficult to compete. The fact that both major cities, Toronto and Montreal, are both in the eastern part of the country exacerbates this. Both the United States & Mexico have several major cities within their borders. A much smaller population also means far less pro cards are available. Many Canadian athletes I’ve interviewed over the years have expressed frustrations with the inconvenience of travel, the fact there’s only one real show per year in their country, and the fact there’s a very small number of cards available. There’s no indication there will be more shows or more cards offered. Something needs to change, but until it does, it’s good to know that Canadian athletes have options. Options that won’t just help them.

Each and every Canadian and Mexican athlete who signs up to compete at the IFBB North American Championships, is growing the sport. They’re traveling to Pittsburgh, getting on stage, and earning pro cards. The more Pros we have, especially in countries with fewer opportunities, the bigger our sport becomes. It’s very easy for long-term amateur athletes to lose heart, give up, and walk away. We have athletes here in America gunning for Pro Cards for over 10yrs, with 4-5 major events to choose from! These are events where class winners – and sometimes even runner-ups – can win IFBB Pro Status! What if all they had was one event per year? What athlete, with a quality physique and who implemented judges’ suggestions year-after-year, could or should, spend a lifetime pursuing a pro card? I have, personally, witnessed Canadian athletes cross the border, give it 110%, and earn pro status. I have, personally, seen these same athletes receive top honors and victories as IFBB pro athletes! The North Americans aren’t just a competing event, but they could serve as a blueprint for what the Canadian Nationals should aspire to become.

For athletes in physique-based sports, especially those working towards IFBB Pro Cards, being a professional in their discipline is extremely important. In addition to growing the sport in our neighboring countries, a show like the North American gives the American athletes an appreciation they simply will not get from competing within our country. And most pros do just that. Where is the biggest Arnold? Where is the New York Pro? Where is the Mr. Olympia? Most American IFBB Pro’s don’t really have any reason to ever compete abroad. A show like Gary Udit’s can be very eye-opening to the world around us. It can also serve as proof positive of the very unifying power of bodybuilding. We want pros who know of and appreciate other cultures. There’s no better way to achieve this than through men and women from different countries competing together! It’s also great to hear different languages spoken by large groups of athletes, be it English, Spanish, or French.

With regards to the fans and the industry, there’s a lot than needs to be said. Fans love bodybuilding and they love buying tickets to competitions. Bodybuilding, especially, remains a very popular sport among muscleheads, with Classic Physique and Men’s Physique not far behind. A show like the IFBB North American, brings athletes from all over the planet to one city, and these athletes bring their fan bases along with them. This is both true in terms of tickets sold, but also fans following along on social media. The internet buzzes whenever shows like these take place. There’s the undeniable loyalty to athletes, but there’s also a national pride component.

Take the Olympics, for example, where countries compete against each other. Each and every athlete wants to be the #1 medal-earner. No one will argue that there’s a definite single-player/athlete aspect to the Olympic games; however, there’s also national fervor involved and national pride within each team. Countries want to win too!! A similar case could be made for the North Americans. How cool would it be if the Canadians dominated one year – or – the Mexicans another, all the while the event is held in the heart of the United States? It also raises the stakes for American athletes and fans. You never want to lose at home, but sometimes that’s just how the cookie crumbles. How PUMPED would the bodybuilding world go in Mexico, if its athletes were winning classes and overalls, left, right, and center? Fans in Pittsburgh would fly Mexican flags, while fans back home would anticipate seeing their athletes at national shows, expos, and gyms to congratulate them in person. Now put yourself in the shoes of an athlete. It always feels great to win, but winning for your country is just that much sweeter!

Switching gears a bit, we can’t help but discuss business. As previously stated, Mexico is a powerhouse and Canada is growing as we speak. That having been said, supplement companies all seem to be chasing after the same [American] buck. There’s tons of money to be made abroad, from supplements to clothing to lifting equipment. Most supplement lines have never researched international sales. Their business models aren’t designed to advertise outside the U.S., & worst yet, many wouldn’t even know how to ship products if orders somehow came in. How sad is that? There’s this whole world of potential customers, cash in hand, waiting to be courted, but all the companies they love simply bypass their countries because it’s just easier to sell in America. Some of these fans will be in Pittsburgh, asking for sales – in person; others may even want to sell the products on their own sites and brick & mortar stores in the overlooked countries.

A competition like the North American will undoubtedly draw out a who’s who of businesses all looking to explore more international type ventures. These companies will see loyal fans trekking to the big show and they will be able to interact with them. They will also have the opportunity to speak to international athletes, who could potentially become sponsored athletes, salespeople, and/or customers themselves. In many countries, retailers are making a killing by importing U.S. products and selling them for vastly inflated prices. In many places, American goods are in such demand, that desperate consumers will pay just about any price. This is both good and bad for the industry.

On the one hand, just about anything that drives up demand is great; however, on the flip side, it creates a perception that American companies just don’t care. It creates an impression that Canada & Latin America are not considered to be as lucrative as the United States. With regard to the Spanish-speaking world alone, we’re discussing over 300 million people. Add Portuguese-speakers (Brazil) and also add Canada, and now you’re looking at a series of missed opportunities. Even though most Canadians share the common language with the United States, many companies still won’t advertise or sell there directly. Successful companies in America, will be successful abroad, but only a show like the North American, gives businesses the unique opportunity to meet & interact with the kinds of people that can make big deals happen.

These are just some of the reasons why this is my favorite pro qualifier. I would highly encourage everyone reading this article to take a look at their calendar and see if they can make it out. Who knows, you might see me there! For more information, be sure to log onto to http://GaryUdit.com! The host hotels have long sold out, but there’s still plenty of options nearby, which are reasonably priced, with comparable amenities. Act fast & reserve now!!