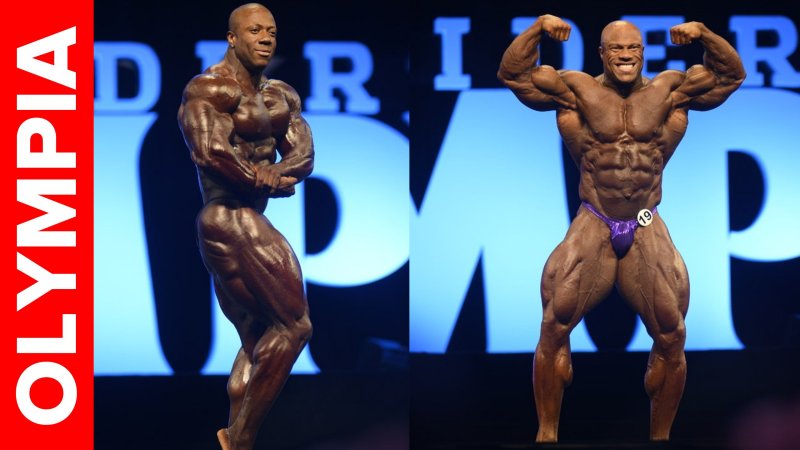 Bodybuilding is a sport, a way of life, that’s steeped in fan spirit. On the one hand, there’s what we’d like to happen, what our hearts would like to see. On the other hand, there’s reality. In reality, it’s very likely that Phil “The Gift” Heath will likely earn his 7th Sandow in just a question of days. He has a solid physique, no injuries, and the only issue that could stop him from winning yet another coveted title, is 100% conditioning. This is not someone who battles dialing it in; rather, it’s about someone who has not done it each and every time, possibly due to minor oversights or miscalculations. Quite frankly, the room for error that’s left, isn’t one that inspires a lot of confidence in a successor toppling the champ. What would happen to the sport of bodybuilding should Heath slip up, leave the door open, and a new champion emerged? There is only one man that realistically can be considered, that man is Shawn “Flexatron” Rhoden, and here’s why.

First and foremost, aesthetics are finally the drop draw. The age of mass monsters is pretty much over. There are some guys on the Olympia stage that could be argued, are throwbacks to the late 90’s/early 2000’s (e.g. Big Ramy, Roelly), but for the most part, the battle is for the most balanced physique, not the biggest, and not even the freakiest. One look at the Top 3 and it becomes abundantly clear that symmetry is what the judges are looking for above all else. Phil Heath, Shawn Rhoden, and Dexter Jackson all espouse the concept of building solid muscle, dialing it in, and presenting the muscle through carefully executed poses on stage. The Top 3 guys are also nearly perfect, in terms of their physiques. Although some argue that Phil may have started out with narrow clavicles, much of that dissent has dissipated over the years. Jackson, 48, has never had strong calves, but he’s pushed himself to the absolute limit. Dexter is proof positive that one muscle group, particularly a smaller one, won’t stop a bodybuilder from earning the top title in the sport. Rhoden needs a bigger back, but as previously stated – bigger isn’t necessarily better. The other knock on Rhoden, is again, the size of his triceps. There will always be people in the press and the audience who will want these guys to blow themselves up, gain weight, and look bigger. If Rhoden was able to get as high as 2nd at the Olympia, then there’s no need for any major changes.

Entertainment value is also key – both back in the day and very much so today. Some top guys have had PR makeovers (e.g. Dexter Jackson), largely because they’ve been criticized as being low intensity (to quote Donald Trump’s coin phrase), unexciting, and some, even, straight up unimaginative. Let’s face it, boring doesn’t sell magazines, it doesn’t get people to log onto websites, and it sure as hell doesn’t sell any supplements, clothing, or accessories. The key to entertainment is having some unique interpersonal social qualities. It doesn’t always have to be about drama, feuds, or any negativity, but fans need more to work with than just muscle-building and meal prep. Someone like Lionel Beyeke has a compete, innovative physique, but what do the fans know about him? What are some well known hobbies he enjoys, is there a pastime (aside from muscle-related themes) that he’s associated with? Does Lionel wear loud clothes, does he dislike anyone? The answer to all of these would either be ‘no’ or ‘who knows.’ When there isn’t much more for the fans to work with than quality muscle, there isn’t going to be much fanfare (sorry, Lionel). One look at the top guys and we see histories, we see hardships, and in some cases we see redemptions through hard work. Sometimes, underdogs never have their day; sometimes underdogs disappear from the stage (e.g. Kai Greene). The fact someone’s an underdog makes them different, it makes them stand out. The underdog may not get more fans than the champ, but people are going to identify with someone like that. Getting fans to relate to you is great, but getting them to identify with you – that’s GOLD!

Entertainment doesn’t require great placings. In fact, there are athletes who have less than stellar contest records, but they’ve made their fame because of all the time and effort they put into their posing routines. Some guys pose so well, that they can literally light up the room with just one single routine. Whether they’re there as competitors or guest posers, promoters want them there, and the fans can’t get enough! The media, both videographers and photographers, love shooting them. It’s a win win, all around. Most of the top guys, particularly the top 3, are all expert entertainers, knowing exactly how to keep the fans excited and the press engaged.

We’ve discussed physique, entertainment value, but we’d be remiss if we didn’t include social media. All Olympians, particularly those in the Top 6 must be on their social media game at all times. This is the best way to stay in touch with the fans, keep them engaged, and grow the sport. Although automatic qualifications at the Olympia have kept some of the best from competing throughout the year, it’s IG, Facebook, Twitter and Youtube where the best in the world keep in touch with their fans. Some athletes may not have the most exciting presence on film and/or may not take the most exciting photos, but the effort is made. Years ago, message boards were also key for this fan-interaction component, but today, it’s all about social media, because of its very personal nature with the athlete. If an athlete hustles and works hard on their channel, his/her fans will be happy, but the athlete has also grown his/her own name, brand, and reputation in the process.

One bodybuilder who has really excelled when it comes to legit social media marketing is Shawn Rhoden, who thanks to the ironclad support of his sponsor, has created a forum through IG Live where fans are treated like royalty. Shawn has the personality that both Phil and Dexter lack. That’s not to say that Heath and Jackson aren’t super nice guys and have great journeys, but Rhoden is just a better communicator. When I tune into Rhoden’s live chats, I see a very real interaction. For example, Rhoden deals with hecklers and haters in a far different way than Heath. Speaking as someone who has had issue keeping haters on the boards at bay, I understand that it’s very easy to get annoyed with faceless, nameless jerks just trying to get a rise out of you. That having been said, sometimes, the people issuing the critiques are named individuals, sometimes they’re in the press, and sometimes the assessments (though not favorable) are not done with any negativity. Just this year, Heath has had multiple social media situations that, in hindsight, I’m sure he could have handled better. There’s no question Heath is changing his approach, though.

Take the 2014 Olympia Press Conference. Phil Heath processed Kai Greene’s antics by taking him to task with the cameras rolling. Next, the bad blood bled into the stage portion of the contest. Heath followed this approach, to a certain extent, this year with Rhoden and the ProSupps ads, online; however, look at how he handled the situation at this year’s press conference (just hours ago). For the press conference, Phil made a concerted effort not to be petty. He came off as very civil, reconciliatory, and totally boring. Again, I’m not here to knock on the champ, but being politically correct is not what the fans want. The fans want REALNESS.

Phil is a great champion and will likely win his 7th Sandow, but if any man should win it away from him, one of the most deserving and best candidates to be our next “King of Bodybuilding,” would be Shawn Rhoden.