How much protein strength athletes need on their non-training days 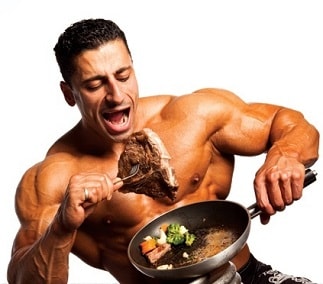 If you do strength training several days a week you’ll still need about 1.7 g protein per kg bodyweight on the days you don’t train. And if you want to be completely certain of getting enough protein you can jack that up to 2.2 g protein, report Canadian sports scientists in the Journal of Nutrition.

Study
The researchers gave men aged 18-40, who had been doing strength training for at least three years and worked out at least four times a week, different amounts of protein on different occasions during their non-training day. Part of the amino acid phenylalanine that the participants got was labelled so that the researchers could measure from their breath the amount of phenylalanine the men burned.

The body cannot store amino acids. It uses them to build tissue and burns the amino acids that it doesn’t need. Because the body needs amino acids in a fixed ratio for building tissue it’s possible to see whether an organism is consuming enough protein by looking at how much of a specific amino acid is being burned.

That’s a short description of the indicator amino acid oxidation technique as it’s called. [J Nutr. 2008 Feb;138(2):243-6.] The researchers used this technique for their strength athletes.

That’s for the average participant. The protein intake was optimal for all participants when 2.2 g protein per kg bodyweight was consumed.

“Therefore, on the basis of these data, we believe that, at least in the case of individuals who engage in bodybuilding exercise chronically, the conclusion of the Institute of Medicine that ‘no additional dietary protein is suggested for healthy adults undertaking resistance or endurance exercise’ needs to be reassessed.”

Background: Despite a number of studies indicating increased dietary protein needs in bodybuilders with the use of the nitrogen balance technique, the Institute of Medicine (2005) has concluded, based in part on methodologic concerns, that “no additional dietary protein is suggested for healthy adults undertaking resistance or endurance exercise.”

Objective: The aim of the study was to assess the dietary protein requirement of healthy young male bodybuilders ( with ≥3 y training experience) on a nontraining day by measuring the oxidation of ingested L-[1-13C]phenylalanine to 13CO2 in response to graded intakes of protein [indicator amino acid oxidation (IAAO) technique].

Methods: Eight men (means ± SDs: age, 22.5 ± 1.7 y; weight, 83.9 ± 11.6 kg; 13.0% ± 6.3% body fat) were studied at rest on a nontraining day, on several occasions (4–8 times) each with protein intakes ranging from 0.1 to 3.5 g · kg−1 · d−1, for a total of 42 experiments. The diets provided energy at 1.5 times each individual’s measured resting energy expenditure and were isoenergetic across all treatments. Protein was fed as an amino acid mixture based on the protein pattern in egg, except for phenylalanine and tyrosine, which were maintained at constant amounts across all protein intakes. For 2 d before the study, all participants consumed 1.5 g protein · kg−1 · d−1. On the study day, the protein requirement was determined by identifying the breakpoint in the F13CO2 with graded amounts of dietary protein [mixed-effects change-point regression analysis of F13CO2 (labeled tracer oxidation in breath)].

Results: The Estimated Average Requirement (EAR) of protein and the upper 95% CI RDA for these young male bodybuilders were 1.7 and 2.2 g · kg−1 · d−1, respectively.

Conclusion: These IAAO data suggest that the protein EAR and recommended intake for male bodybuilders at rest on a nontraining day exceed the current recommendations of the Institute of Medicine by ∼2.6-fold.