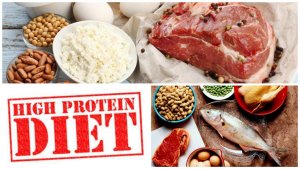 A protein-rich diet – usually a diet that is high in animal protein – is not dangerous. And certainly if you have a healthy lifestyle, don’t smoke, get enough exercise and have a healthy bodyweight, a protein-rich diet is absolutely not unhealthy. Epidemiologists at the University of Harvard have published their findings in JAMA Internal Medicine.

Study
The researchers gathered and collated data from the Nurses Health Study and Health Professionals Follow-up Study. That gave them data on 131,342 participants who had been followed for several decades.

Results
The more energy the participants derived relatively speaking from animal proteins, the greater their risk of dying, as the figure below shows, but you can see that the increase in mortality risk was very small.

For the nitpickers among us: the increase in mortality risk translated above all into an increased risk of fatal cardiovascular disease.

It is so that a diet that is high in animal protein is often associated with an unhealthy lifestyle. No, we’re not talking about natural bodybuilders and paleo diet adepts. These people are often health freaks. But in others a diet containing high amounts of animal protein is often accompanied by unhealthy lifestyle factors such as overweight, high alcohol consumption, smoking, high unhealthy fat intake and high blood pressure, to name but a few factors.

Thats why the researchers looked again at the relationship between premature mortality and the consumption of animal proteins, but this time they split the participants into a group with a healthy lifestyle and a group with at least one unhealthy lifestyle factor. When they did this it emerged that the small negative health effect of a high animal-protein intake was only found in the latter group.

The researchers also looked at the effect of plant-based proteins. The more of these that the participants consumed, the lower their mortality risk, as the figure below shows.

According to this analysis, for every three percent of your total energy intake that comes from plant-based proteins, your mortality risk decreases by ten percent, the researchers calculated. If that is indeed the case, a protein-rich vegan diet might just be pretty healthy.

If a vegan lifestyle is not for you, it’s still worth looking at the figure below. It shows the effect on mortality of replacing various animal proteins by plant proteins.

This analysis shows that above all replacing the proteins in intensively processed meat products (frankfurters, sandwich meats, sausage) by plant proteins has an effect.

Conclusion
“Although higher intake of animal protein was associated with higher mortality […], these associations were confined to participants with at least 1 lifestyle risk factor”, the researchers concluded.

Importance Defining what represents a macronutritionally balanced diet remains an open question and a high priority in nutrition research. Although the amount of protein may have specific effects, from a broader dietary perspective, the choice of protein sources will inevitably influence other components of diet and may be a critical determinant for the health outcome.

Objective To examine the associations of animal and plant protein intake with the risk for mortality.

Design, Setting, and Participants
This prospective cohort study of US health care professionals included 131 342 participants from the Nurses’ Health Study (1980 to end of follow-up on June 1, 2012) and Health Professionals Follow-up Study (1986 to end of follow-up on January 31, 2012). Animal and plant protein intake was assessed by regularly updated validated food frequency questionnaires. Data were analyzed from June 20, 2014, to January 18, 2016.