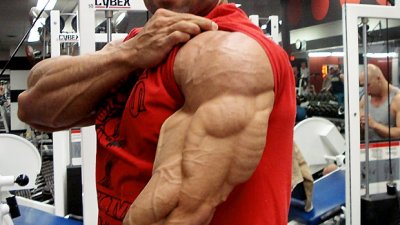 Steroids users will have caused lasting damage to their hormone balance after a couple of years, we wrote recently. That post was based on a Danish study that was recently published in PLoS One. A year before, researchers at Harvard Medical School published a similar study. While it’s not as solid as the Danish study, the results are just as unpleasant. According to the Harvardians, half of all ex steroids users never recover their hormone balance.

Study
The researchers studied 55 male recreational bodybuilders. They only took people who could do at least 1 rep with 125 kg on the bench press.

Of the group, 19 bodybuilders had used steroids in the past but had since stopped. Ex-users who had had testosterone therapy because their testes no longer produced enough male sex hormone were excluded from the study. The 36 bodybuilders who said they had never used steroids were subjected to various tests to check whether they really were natural bodybuilders.

Results
The percentage of ex-users with a relatively high testosterone level was noticeably higher than among the never-users. And yes, the differences between the groups were statistically significant.

Four ex-users had only stopped cycling 4-6 months before the experiment. The rest were already at least 7 months clean. Excluding the data for the four recent ex-users did not change the overall findings.

The researchers summarise the results of their study in this table.

Conclusion
Just over half of the ex-users showed “pronounced symptoms of anabolic steroids withdrawal hypogonadism”, according to the Harvardians. And although they only studied a small number of bodybuilders, they believe the results of their study give reason for concern.

“The present observations, despite their limitations, suggest that anabolic steroids induced hypogonadism likely represents an emerging issue in the growing world population of anabolic steroids users – an issue still apparently underrecognized in the scientific literature”, they wrote. “Hypogonadal symptoms are of particular concern because they may induce individuals to quickly resume anabolic steroids use after stopping a prior course of these drugs, in an attempt to self-treat dysphoric sexual and mood symptoms.”

“To prevent anabolic steroids dependence, and to reduce the risk of prolonged hypogonadal syndromes, hypogonadal patients will likely require endocrinological treatment to restore normal hypothalamic-pituitary-testicular function, possible antidepressant treatment (if depressive symptoms are pronounced), and substance-dependence treatment to reduce the risk of relapse into steroids use.”

Aims
To assess the frequency and severity of hypogonadal symptoms in male long-term anabolic–androgenic steroid (AAS) misusers who have discontinued AAS use.

Measurements
The Structured Clinical Interview for DSM-IV, questions regarding history of AAS use, physical examination, serum hormone determinations and the International Index of Erectile Function (IIEF).