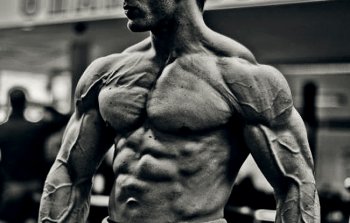 If you want to lose fat by doing more exercise, then exercise as much as possible on an empty stomach. In the short term doing this burns more fat than if you exercise while you’ve still got nutrients in the bloodstream, but in the long term the slimming effect is even stronger. By exercising before breakfast you probably train your fat tissues to break themselves down. British researchers at the University of Bath reached this conclusion in a small human study.

Study
The Brits got 10 healthy but heavy men to jog a moderate intensity for an hour in the mornings. The men ran at 60 percent of their VO2max.

On one occasion the men ran on an empty stomach [Fasted]; on the other occasion they ran two hours after having eaten a breakfast of about 650 kilocalories [Fed].

Results
When the men ran on an empty stomach they burned 20 g less carbohydrates and 7 g more fat than they did when they ran after breakfast.

That was not much of a surprise. More interesting was what happened to the men’s fat tissue. Jogging activated all kinds of genes that stimulate fat burning, but this happened mainly after jogging in the fasted state.

The table below is simplified. Click on it and the real thing will appear.

Conclusion
“This study provides the first evidence that the feeding status alters the response of adipose tissue to acute exercise,” the Brits concluded. “Several genes involved in lipid metabolism, insulin signaling and glucose transport were differentially expressed in adipose tissue when exercise was performed in a fed versus fasted state with either lower or opposing responses after feeding.”

“Given the nature and direction of these differences, we propose that feeding is likely to blunt long-term adaptations induced within adipose tissue in response to regular exercise.”

So if you exercise after a meal, your fat tissue is faced with “competing challenges”, explained the research team leader Dylan Thompson of the University of Bath in a press release. [sciencedaily.com April 6, 2017]

Feeding profoundly affects metabolic responses to exercise in various tissues but the effect of feeding status on human adipose tissue responses to exercise has never been studied. Ten healthy overweight men aged 26 ± 5 years (mean ± SD) with a waist circumference of 105 ± 10 cm walked at 60% of maximum oxygen uptake under either FASTED or FED conditions in a randomised, counterbalanced design. Feeding comprised 648 ± 115 kcal 2 h before exercise. Blood samples were collected at regular intervals to examine changes in metabolic parameters and adipokine concentrations. Adipose tissue samples were obtained at baseline and one hour post-exercise to examine changes in adipose tissue mRNA expression and secretion of selected adipokines ex-vivo. Adipose tissue mRNA expression of PDK4, ATGL, HSL, FAT/CD36, GLUT4 and IRS2 in response to exercise were lower in FED compared to FASTED conditions (all p ≤ 0.05). Post-exercise adipose IRS2 protein was affected by feeding (p ≤ 0.05), but Akt2, AMPK, IRS1, GLUT4, PDK4 and HSL protein levels were not different. Feeding status did not impact serum and ex-vivo adipose secretion of IL-6, leptin or adiponectin in response to exercise. This is the first study to show that feeding prior to acute exercise affects post-exercise adipose tissue gene expression and we propose that feeding is likely to blunt long-term adipose tissue adaptation to regular exercise.