Newer PostShould You Eat Before Training?
Older PostWhy You Should Compete Against Your Own Mirror Image
Share on FacebookShare on TwitterShare on LinkedinShare on Pinterest 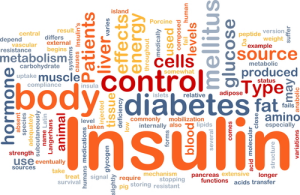 The faster you eat, the more difficult it is for the hormone insulin to do its work in your body. That means that fewer nutrients reach your muscles, and probably that more get deposited in your fat reserves. In the long term this leads to a much higher chance of developing diabetes type-2.

Study
We’ve extracted these words of wisdom from a small epidemiological study published recently by endocrinologists at the Lithuanian University of Health Sciences in Clinical Nutrition. The researchers collected data on 234 people who had recently been diagnosed as having diabetes type-2. They compared these data with data on 468 people who did not have diabetes.

One of the questions the researchers asked the participants was about the speed with which they generally ate their meals. If they compared themselves with other people at the same table, did they eat faster? Or at the same speed? Or more slowly?

Results
The researchers discovered that the fast eaters were twice as likely to have diabetes type-2 than the slow eaters. The researchers corrected for factors such as genetic predisposition, BMI, waist measurement, education, smoking, the amount of triglycerides in the blood and physical exercise. Click on the table for a complete version.

Mechanism
If you eat fast, you eat more; if you eat slowly, you eat less. [J Am Diet Assoc. 2008 Jul; 108(7): 1186-91.] That’s probably because the digestive system produces all sorts of appetite supressing hormones while we are eating. [J Clin Endocrinol Metab. 2010 Jan; 95(1): 333-7.] Production of these hormones is slower in fast eaters. Apparently these hormones also ensure that the insulin hormone can do its work.

Fast eating and the risk of type 2 diabetes mellitus: a case-control study.

BACKGROUND & AIM:
The aim of the study was to assess the relationship between eating speed and the risk of type 2 diabetes mellitus.

SUBJECTS AND METHODS:
A case-control study included 234 cases with newly diagnosed type 2 diabetes and 468 non diabetic controls. A specifically designed questionnaire was used to collect information on possible risk factors of type 2 diabetes. The speed of eating was self-reported by study subjects compared to other subjects, with whom they were eating at the same table. The odds ratios (OR), and 95% confidence intervals (95% CI) for type 2 diabetes were calculated by a conditional logistic regression.

RESULTS:
Variables such as a family history on diabetes, body mass index, waist circumference, educational level, morning exercise, smoking and plasma triglycerides level were retained in multivariate logistic regression models as confounders because their inclusion changed the value of the OR by more than 5% in any exposure category. After adjustment for possible confounders more than two-fold increased risk of type 2 diabetes was determined for subjects eating faster (OR = 2.52; 95% CI 1.56-4.06) vs. subjects eating slower.

CONCLUSIONS:
Our data support a possible relationship between faster eating speed and the increased risk of type 2 diabetes mellitus.
Copyright © 2012 Elsevier Ltd and European Society for Clinical Nutrition and Metabolism. All rights reserved.