Taurine Strength athletes that are positive about BCAA's, but are looking for a supplement that works a little better, should try combining the 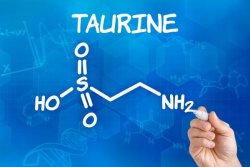 Taurine
Strength athletes that are positive about BCAA’s, but are looking for a supplement that works a little better, should try combining their BCAAs with taurine. Researchers at the University of Tsukuba in Japan come to this conclusion.

BCAAs & muscle
Many studies have shown that BCAA supplementation protects protect muscles from decay/breakdown due to intensive strength training. Because the body doesn’t have to repair as many damaged muscle fibres, it can invest more energy in the formation of new muscle tissue, so BCAA supplementation enables strength athletes to build up more strength and mass. In theory at least. There are no studies which show that BCAAs speed up strength athletes’ progression.

The researchers wondered whether BCAAs would work better when combined with taurine. Like BCAAs, the taurine is also present in large quantities in muscle tissue. Taurine probably protects muscle cells from being damaged by aggressive molecules that are released during intensive exercise.

Study
To test their theory the researchers devised an experiment with 36 male students. All groups trained their biceps in a way that’s guaranteed to give you sore muscles.

Results
During the days after the biceps training session the researchers asked the subjects how sore their muscles felt. As you can see below, supplementation with BCAAs reduced the muscle pain and the combination of BCAAs and taurine reduce the pain even more. 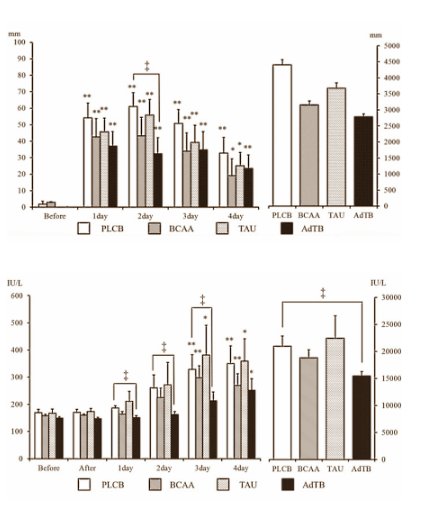 The researchers measured the concentration of the enzyme lactate dehydrogenase [LDH] in the subjects’ blood. LDH is an indicator of muscle damage – the more LDH in your blood after a workout, the more damage the muscles have already incurred. As you can see above, the researchers found significantly less LDH in the blood of the group that took taurine and BCAAs.

Sponsor
The research was funded by the supplement manufacturer Seikatsu Bunkasya.

Footnote
Not everyone reacts well to taurine supplements. Some people experience sleep problems and an unpleasant feeling at a much lower dose than the 6 g the Japanese gave their subjects.

Additional effects of taurine on the benefits of BCAA intake for the delayed-onset muscle soreness and muscle damage induced by high-intensity eccentric exercise.

Taurine (TAU) has a lot of the biological, physiological, and pharmocological functions including anti-inflammatory and anti-oxidative stress. Although previous studies have appreciated the effectiveness of branched-chain amino acids (BCAA) on the delayed-onset muscle soreness (DOMS), consistent finding has not still convinced. The aim of this study was to examine the additional effect of TAU with BCAA on the DOMS and muscle damages after eccentric exercise. Thirty-six untrained male volunteers were equally divided into four groups, and ingested a combination with 2.0 g TAU (or placebo) and 3.2 g BCAA (or placebo), thrice a day, 2 weeks prior to and 4 days after elbow flexion eccentric exercise. Following the period after eccentric exercise, the physiological and blood biochemical markers for DOMS and muscle damage showed improvement in the combination of TAU and BCAA supplementation rather than in the single or placebo supplementations. In conclusion, additional supplement of TAU with BCAA would be a useful way to attenuate DOMS and muscle damages induced by high-intensity exercise.